KARACHI: Ján Figeľ European Union Special Envoy for promotion of freedom of religion or belief outside the EU spoke at Alliance Française de Karachi on Towards an Education System for Human Rights and Pluralism.

The Envoy, while maintaining that education is the most influential tool to change society, insinuated towards nexus between fundamentalism and madrassas in Pakistan.

During his talk Ján Figeľ stressed on the importance of accepting diversity while working for oneness and mused: “A creative artist does not copy!”

He noted that ignorance (lack of knowledge and education), indifference and lack of courage (fear) were hindering pluralism.

Pointing out that those problems could be overcome via reconciliation efforts by courageous leaders as is evident in the case of France and Germany, he stressed “it is not a fairytale, it works”!

On being told that in Pakistan religion was being manipulated for maintaining political power, Ján Figeľ conceded that state-power was being hijacked by religious parties.

Warning that extremists were defining ‘who we are‘ and ‘who they are‘, he said that credible religious leaders should educate masses that hatred is against the religion.

Special Envoy, while stating that there were 244m migrants all over the world, told that 65m of them were forced to migrate.

Commending Pakistan for accommodating 3m Afghans the Special Envoy stated that Pakistan might and can change!

When reminded by this scribe that it was the West that had created and nurtured Talibaans as a force against Soviets (who had invaded Afghanistan in an effort to reach the warm waters), the European Commission Special Envoy Ján Figeľ said that EU could not be held responsible for all that had been done by others in the history.

Answering to another query he said that status quo – as desired by powers with vested interests – should not prevail. 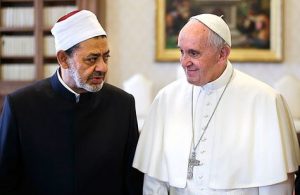 He said that meeting between Pope and the Jama al-Azhar Grand Mufti propagated a message that was not possible via volumes of fatwaz!

US aviation agency defends its vetting of plane involved in crashes