ISLAMABAD: Hizbul Mujahideen’s 22-year-old, social-media savvy, chief of operations Burhan Muzzafar Wani, (the ‘iconic visage of militancy’ in Kashmir) was gunned down by the government forces.

Calling it an act of extra-judicial killing, people resorted to agitate on streets. The mob has also killed a police driver by pushing his mobile bunker vehicle into Jehlum River at Sangam in Anantnag district on Sunday.

Massive agitation continues unabated despite curfew that has been clamped in major parts of Kashmir. Three police stations (Anantnag, Kulgam, Shopian) have so far been set on fire. Reportedly weapons were looted.

Indian troops retaliated by opening fire and till the filing of this story 20 agitators have been killed and 300 injured. Mobile and internet services still remain blocked in the Valley. Chief Minister of Jammu and Kashmir Mehbooba Mufti Sayeed held: “Disproportionate use of force for crowd control results in loss of precious lives and grave injuries which should be avoided at all costs”.

Director General of Police K. Rajendra has said that Wani and two other members of his group were killed on Friday when police (following a clue) cordoned a forested village in Kokernag area.

Pakistan has condemned the killing of Wani.  Spokesman of Foreign Office (FO) Nafees Zakaria held: “The extra-judicial killing of Kashmiri leader Burhan Wani and scores of other innocent Kashmiris is deplorable and condemnable…such acts are a violation of the fundamental human rights of Kashmiris and can not deter the people of Jammu and Kashmir from their demand for the realization of the right to self determination”. FO further reiterated that Kashmir dispute could only be solved through fair plebiscite under UN.

For the last five years Wani, son of a school headmaster, had been using social media featuring himself in military fatigues attempting to invite people rise against the occupation by India. 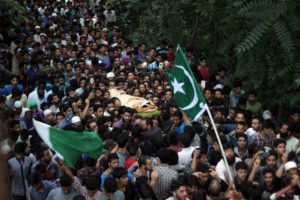 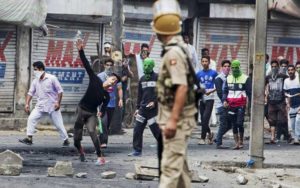 Following the funeral of Burhan Muzzafar Wani violence erupted all over the Valley.

No compromise on Kashmir issue at any dialogue with India: Sartaj