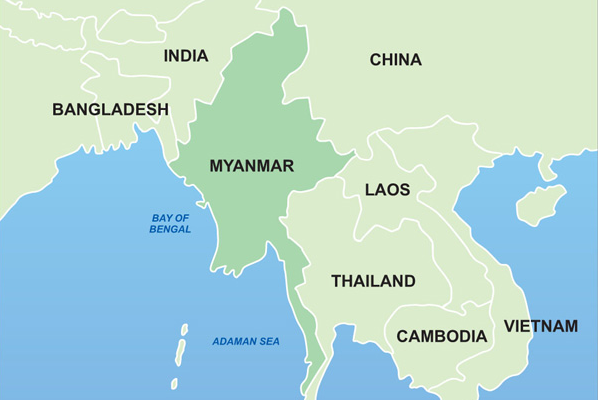 YANGON: At least 20 people were killed in Myanmar on Monday after another day of unrest and protests against the junta that seized power six weeks ago, a local monitoring group said.
The country has been in uproar since the military ousted civilian leader Aung San Suu Kyi from power, with hundreds of thousands taking to the streets to demand a return to democracy.
Security forces have used tear gas, rubber bullets and live rounds against protesters in near-daily crackdowns across the country.
The Assistance Association for Political Prisoners, a local monitoring group that has been tracking arrests and fatalities, said at least 20 had died in Monday’s violence.
“Casualties are drastically increasing,” it said in a Tuesday statement, adding that more than 180 people had been killed since the February 1 coup.
While the bulk of Monday’s deaths were anti-coup demonstrators, some were civilians who were “not even participating in the protests”, it said.
Most were killed in central Myanmar, while at least three died in commercial hub Yangon.
The Yangon deaths included two women in their homes who were shot when security forces opened fire on the streets.
AFP has independently verified 11 fatalities.
Sunday marked the single deadliest day since the coup so far, with 44 people killed in unrest across the country.
Six townships in Yangon were placed under martial law after Sunday’s violence.
Anyone arrested there faces trial by military tribunal rather than civilian courts, with sentences ranging from three years’ hard labor to execution. It may be noted that that atleast 138 people have been killed protesting against a military coup in Myanmar since February 1, the United Nations said Monday, condemning the violent crackdown against “peaceful” demonstrators including women and children.
“This includes 38 people who were killed yesterday, the majority in the Hlaing Thayer area of Yangon, while 18 people were killed on Saturday,” said Stephane Dujarric, spokesman for UN Secretary-General Antonio Guterres.

Eleven anti-coup protesters were killed across Myanmar on Monday as demonstrators returned to the streets after the deadliest day since the military seized power from civilian leader Aung San Suu Kyi.
At least 44 protesters were killed Sunday as security forces cracked down on pro-democracy demonstrations, taking the death toll since the coup to more than 120, according to the Assistance Association for Political Prisoners (AAPP) monitoring group.
Those killed on Monday were shot dead in several locations in the country’s central regions, and witnesses said the junta was again using lethal force against protesters.
“Two men were killed because of gunshots and six others were injured,” a witness in Magway region’s Aunglan town told AFP, adding that one of the dead was shot in the chest.
“He was right besides me. Another one got shot in his head.”
The country has been in uproar since the putsch, with daily protests demanding a restoration of democracy despite the junta’s increasingly forceful attempts to quell dissent.
The bulk of the earlier deaths on Sunday came from a clash in a garment-producing district in the capital Yangon where multiple Chinese-owned factories were razed, drawing a sharp rebuke Monday from Beijing, which urged Myanmar to “resolutely avoid a recurrence of such incidents”.
Despite the high death toll, protesters returned to the streets Monday but six fatalities were also reported in the city of Myingyan.
Among those dead were “three people, including a woman… with gunshots,” said a Myingyan resident.
Both witnesses who spoke to AFP declined to be named for fear of repercussions.
There was a further death in the city of Monywa, state media said, while two men in their 20s were killed on the spot in Mandalay, according to a local doctor and an AFP reporter.
News of the violence came out in the afternoon due to a block on mobile data networks across Myanmar — which also scuppered a scheduled video court appearance by Suu Kyi.
The court hearing for the Nobel laureate — who spent more than 15 years under house arrest during previous military rule — was scheduled for 10 am (0330 GMT) in Myanmar’s capital Naypyidaw, but it was postponed until March 24, her lawyer Khin Maung Zaw told AFP.
“There’s no court hearing because there’s no internet and the hearing is conducted by video conference… We cannot do video,” he said.
Myanmar authorities have throttled the internet every night for several weeks, normally restoring services in the morning, but monitoring service Netblocks said mobile data networks were kept offline Monday.
Suu Kyi faces at least four charges.
Military authorities have also accused her of accepting illegal payments — allegations her lawyer says are “groundless”.
Suu Kyi’s postponed hearing came a day after violent clashes between security forces and protesters, which also saw the torching of several Chinese-owned factories in a textile-producing district of commercial hub Yangon as many protesters believe Beijing is supportive of the coup.
Six Yangon townships were under martial law by morning — anyone arrested there faces trial by military tribunal rather than civilian courts, with sentences ranging from three years’ hard labour to execution.
Chinese foreign ministry spokesman Zhao Lijian described the incidents as “nasty” on Monday.
China “is very concerned about the impact on the safety of Chinese institutions and personnel,” he told reporters in Beijing, adding the Myanmar security forces had reinforced the area around the factories.
“China will continue to urge Myanmar to take concrete steps to stop all acts of violence and bring the perpetrators to justice and ensure the safety of Chinese people’s life and property.”
Taiwan, meanwhile, advised its companies in Myanmar to fly the island’s flag to avoid being targeted.
State-run television confirmed on Monday that a police officer was shot dead in the city of Bago, northeast of Yangon, during a protest.
– ‘Junta leaders don’t belong in power’ –
International alarm over the bloodshed is growing, but so far Myanmar’s generals have shown no signs of heeding calls for restraint.
Tom Andrews, United Nations special rapporteur on rights in Myanmar, tweeted that he was “heartbroken/outraged” at Sunday’s events.
“Junta leaders don’t belong in power, they belong behind bars,” he wrote.
“Their supply of cash & weapons must be cut now.”
UN envoy for Myanmar Christine Schraner Burgener also condemned Sunday’s bloodshed, while the country’s former colonial ruler Britain said it was “appalled” by the use of force “against innocent people”.
Last week, Andrews said there was growing evidence that the junta was committing crimes against humanity — including murder, forced disappearances and torture.
Amnesty International has also accused the Myanmar military of premeditated killings and using battlefield weapons on unarmed protesters.