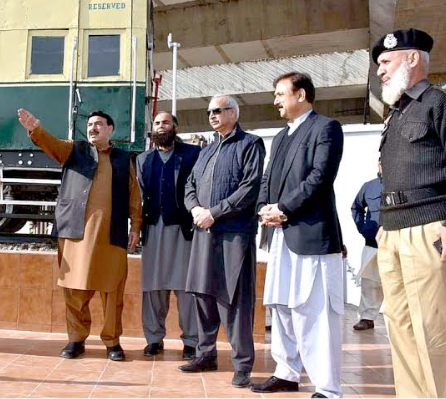 ISLAMABAD: Minister for Railways Sheikh Rashid Ahmed Saturday said twenty new trains will be run next year to facilitate the passengers.
Talking to a private news channel, he said the number of freight trains will also be increased by the end of next year, adding two VIP trains would also be run beside three trains for the tourists.
The minister said 10,000 posts would be created for skilled youth in Pakistan Railways.
He said a train was being inaugurated in the name of Sufi poet Rehman Baba that will reach Karachi in the least time. The minister said we are going to change the track structure of Pakistan.
To a question, he said Shahbaz Sharif is a big criminal than Nawaz Sharif as he looted billions of rupees on the name of development of Punjab province.
He said former railways minister Khawaja Saad Rafiq’s wrong policies incurred a loss of millions of rupees to Pakistan Railways and he will approach NAB in this regard soon.
To another question, the minister said the Information Minister Fawad Chaudhry is working efficiently.
He said South Punjab secretariat will begin work soon as the government is taking serious steps in this regard.
The progress of South Punjab is priority of the present government, he added
He said every possible measure is being taken for the improvement of all sectors. He said we are committed to serve people.
He articulated that status quo has been broken in Pakistan due to Prime Minister Imran Khan’s struggle as he is taking measures for the betterment of poor people of the country.
The minister said Prime Minister Imran Khan was taking many steps for the uplift of the poor people and a foundation has been laid for a change in the country.
He said the government is introducing revolutionary reforms in every sector and special measures have been taken for the progress and prosperity of the country.
He said the government has taken many steps for the uplift of an economy and equal progress will be ensured for all
areas of the country.