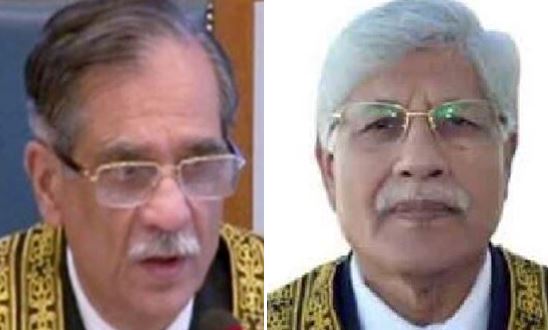 At the outset of hearing, the chief justice remarked that this court believe in freedom of expression and respect it but an attempt was made to build a narrative that this court could take directions from someone.

The news story was published just before the two days of hearing of appeals in Avenfield apartment reference. The chief justice said the court had tried to realize the respondents about their mistake.

On query of the bench, the court was told that Mir Shakeel ur Rehman couldn’t appear this days as his family was being infected by COVID-19.

The court said if the respondents wanted to conduct inquiry about the allegations of affidavit then it would be against the judges of this court. Journalist Ansar Abbasi said he didn’t know whether the contents of the affidavit were false or true.

He further said that he didn’t mention the name of any judge or court in his news story.

The chief justice remarked that this court was trying to make the respondents realize their mistake. The court said if the respondents wanted an inquiry about the affidavit then it would be against the judges of IHC.

Journalist Ansar Abbasi said he had no wrong opinion about the judges of this court, adding that it was Rana Shamim who was responsible to tell the truth.

He prayed the court not to frame charges against the respondents.

Journalist Nasir Zaidi said this court always gave justice to the journalist community in every hard time. He prayed the court to dispose of the case as any mistake could happen unwillingly.

The court observed that the journalist had admitted that this affidavit could be based on false contents. The bench said the case could proceed further after the charges were framed.

The chief justice further noted that the last order of this court about this case was sent to an international institution. Advocate Faisal Saddique adopted the stance that this case didn’t fall in jurisdiction of contempt of court with regard of the said journalist. The journalist should get back from his stance, he said.

The court asked whether there was any decision of this court which showed that the judges could be influenced. Amicus Curiae Reema Umer said the contempt of court proceeding should be initiated against the person who gave affidavit. The court said the said journalist and media house had no regret on publishing of the news story.

Latif Afiridi said his client Rana Shamim had not given this affidavit for publication, adding that the journalist had found it from somewhere else.

He said the media should discuss the politics but shouldn’t talk about the pending cases and judiciary. The chief justice said that he had been saying that no one could approach any judge of this court.

The court decided to give time to respondents to think about their stance and adjourned hearing til January 20.