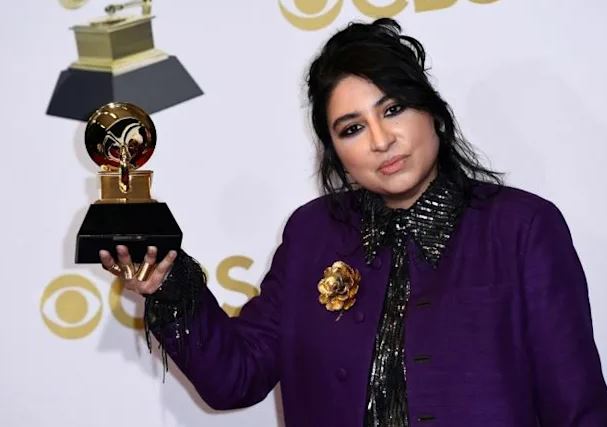 NEW YORK: Pakistani singer Arooj Aftab has created history, winning a Grammy, a major annual American entertainment award, to become the first-ever Pakistani woman to receive the prestigious trophy at a glittering ceremony in Las Vagas where the industry’s top musical stars and icons were present.

After receiving the award, she said, “I think I’m gonna faint. Vow, thank you so much. I feel like this category in itself has been so insane like Burna Boy, Wizkid, Femi Kuti, Angélique Kidjo…”

Arooj was also nominated in the Best New Artist category, but that honour went to singer Olivia Rodrigo.

Media reports quoted her as saying backstage at the pre-gala ceremony, “I am beyond thrilled. It feels great. I’ve been very nervous all day. And we’re off to a good start.”

Arooj moved to the US in 2005 to study music at the Berklee College of Music. She released her first album Bird Under Water in 2014.

The Pakistani singer has been steadily gaining global attention for her work that fuses ancient Sufi traditions with inflections of folk, jazz, and minimalism.

Born in Saudi Arabia, Arooj spent her teenage years in Lahore before relocating to Boston to study musical production and engineering at the prestigious Berklee School of Music.

In Lahore, she learned to play the guitar in autodidact and gradually acquired her singing style while listening, among others, to Billie Holiday, Hariprasad Chaurasia, Mariah Carey, Begum Akhtar.

Despite difficulties, she promoted her music in Pakistan, being one of the first musicians to use the Internet in the early 2000s; her renditions of “Mera Pyaar” and “Hallelujah” went viral and launched the Pakistani indie scene.

She released her third studio album Vulture Prince to critical acclaim and gained even more attention after former US President Barack Obama included the track “Mohabbat”, which she sand on Sunday, on his 2021 summer favourites list.

Arooj has performed at a number of major New York venues including Lincoln Center and the Museum of Modern Art, also opening for Mitski at The Brooklyn Steel in 2018.

Meanwhile, Mahira Khan, Pakistan’s top film star, wrote on the Twitter, “So so proud! Shine on you crazy star @arooj_aftab.”

Exposure to germs is beneficial for your kids: Study