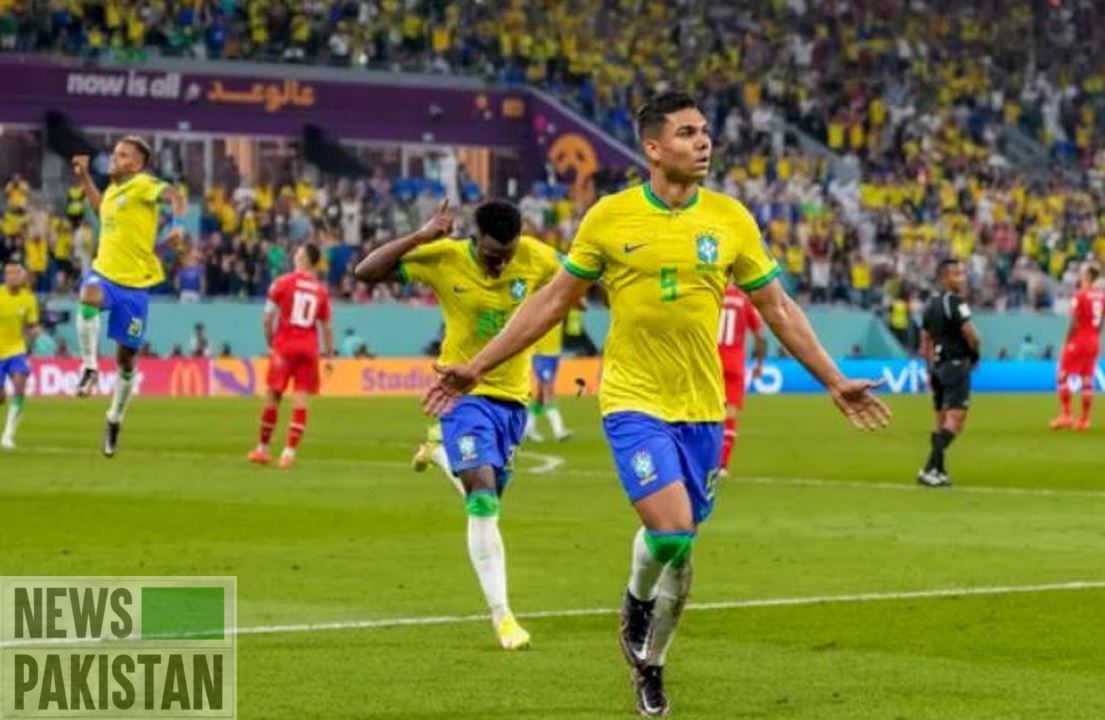 DOHA: A Brazil side lacking spark without the injured Neymar needed a late strike from Casemiro to edge out Switzerland 1-0 on Monday as the five-time winners secured their place in the World Cup last 16 with one game to spare.

The Brazilians had been frustrated by an obdurate Swiss side at Doha’s Stadium 974 and it looked as if they would have to settle for a point after a Vinicius Junior strike in the second half was disallowed for offside following a VAR check.
But then, with seven minutes remaining, Rodrygo flicked the ball on to Casemiro just inside the box and the Manchester United midfielder’s volley flew into the net with the help of a slight but significant deflection off Manuel Akanji.
Tite’s side are just the second team to qualify for the last 16 after France and the only side apart from the holders to have won both group matches so far in Qatar.
“The first aim was to qualify. That was really important in a group as difficult as ours,” the 30-year-old Casemiro told Brazilian broadcaster Sportv.
“We had to be patient against an experienced side who know how to play the game. It was always going to be decided by little details but we knew we would have plenty of possession and thankfully we managed to get the goal.”
With six points, Brazil will be tempted to rest players for their final Group G game against Cameroon on Friday, when a draw will secure top spot.
Switzerland, meanwhile, failed to muster a shot on target but remain on course to qualify too, knowing a win against Serbia in their last game will take Murat Yakin’s side through and a draw may also suffice.
“We are competitive against bigger teams. I think we have proven that time and time again,” said Yakin, who was missing one of his main creative sparks in Xherdan Shaqiri.
“We lacked a bit of courage going forward but there are a lot of good things to take from this.”
They have made a habit of making at least the first knockout round at major tournaments, while Brazil are in Qatar to win a sixth World Cup and nothing less will do.
The Selecao were always going to miss Neymar, although coach Tite has said he is confident the Paris Saint-Germain superstar will recover from his ankle injury to play a part again at the finals.
After the class of Richarlison made the difference in their opening win over Serbia, this was a reminder for the Brazilians of the strength in depth in the European game.
Four years ago, before losing to Belgium in the quarter-finals, they were also held by Switzerland in the group stage.

Yakin’s side therefore had no reason to fear Brazil, who introduced Manchester United midfielder Fred into their line-up in place of Neymar.
As a result they were set up in a 4-3-3 formation, with Fred and Lucas Paqueta either side of Casemiro, while Eder Militao stood in for the injured Danilo at right-back.
There were only flashes of what Brazil could do in a frustrating first half, with the loudest cheers from the masses of supporters in yellow and green coming when the big screen showed two-time World Cup-winning striker Ronaldo in the stands.
Vinicius had the best chance of the opening period when he connected with a Raphinha cross at the back post in the 27th minute, but Yann Sommer tipped his effort behind.
That Tite was not satisfied with Brazil’s first-half showing was clear when he hooked Paqueta at half-time and sent on Rodrygo.
The 21-year-old was involved when Brazil thought they had taken the lead just after the hour mark, helping gain possession before Casemiro released Vinicius to run through and score.
But the celebrations were cut shot as the goal was disallowed by VAR for an offside against Richarlison.
Tite turned to his bench and sent on more attackers in Gabriel Jesus and Antony, but the goal finally arrived from a less likely sources in Casemiro and Brazil saw out a deserved victory.

Gold up for grabs as Tokyo Paralympic sport starts