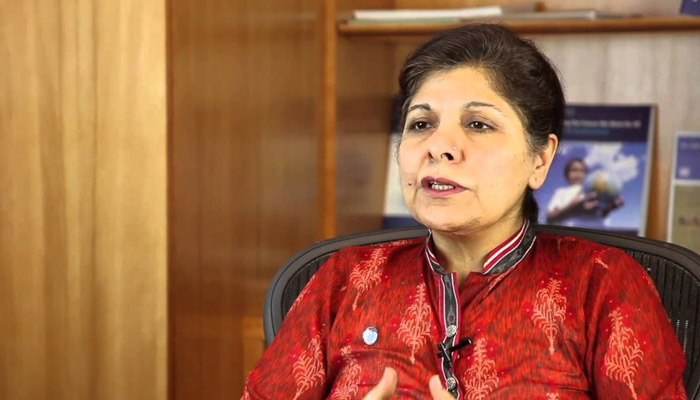 She said Pakistan should take maximum advantage from one time opportunity of CPEC, which could open up more corridors of cooperation in the region and the world, said a press release here.  Speaking at the launching ceremony of Sustainable Development Policy Institute’s (SDPI) China Study Center here Thursday, Dr. Shamshad said the Center is a welcoming initiative, which could help bridge the policy-research gap. She hoped the Center will produce high-quality research for informed policymaking. Dr. Shamshad said China is the country which is systematically moving toward achieving sustainable development and Pakistan can learn from their experience. She said China is a major player in the global economy, being the member of G-20 countries. Pakistan can benefit from CPEC in term of connecting to the rest of the world. In the second phase of CPEC, Pakistan needs to examine the opportunities and prioritize its development goals, she added.
Yao Jing Ambassador of the People’s Republic of China said that the Center is timely and kind of blessing for China and Pakistan. He said that China wanted to see Pakistan a developed and prosperous country and CPEC demonstrates our commitment and support to Pakistan. He said that CPEC is not the only determinant of the Pakistan-China relationship, but our relationship is historic which last over decades. He said that the governments, as well as people of both China and Pakistan, are committed to further strengthen the ties. Our relationship with Pakistan is of mutual cooperation and not competition, he added.
Dr. Abid Qaiyum Suleri, Executive Director, SDPI said that Pakistan’s relations with China are beyond CPEC. He said that to understand the relationship between Pakistan and China, there is a need to understand China’s policy of engagement with the world, China’s vision behind Belt and Road Initiative (BRI), and China’s policy of overcoming poverty and corruption. He said that there is a dearth of knowledge and most of the discussions around CPEC and Pak-China relationship lack evidence. He said the Center will produce evidence-based knowledge to bridge the policy research gap. The center would serve as virtual study portal, where anyone can contribute or access to literature, he added.
Haroon Sharif, Former Regional Advisor Economic Corporation (South Asia), World Bank, said that focusing just on large infrastructure projects can lead to regional disparity and inequality, which need to be addressed. He said both the governments of China and Pakistan must prioritize the development goals in CPEC and should enhance focus towards social sector, agriculture and industry, and energy sector. He said that the model of the Center should be based on public-private partnership principles to produce knowledge as per the needs of the economy. There is an emergence of new connectivity and market of more than 700 million people in South Asia, Central Asia, and China, which the world cannot ignore and need to be considered by both Pakistan and China, he added.

Share on Whatsapp:
Tags: CPEC can open more corridors of cooperation in region