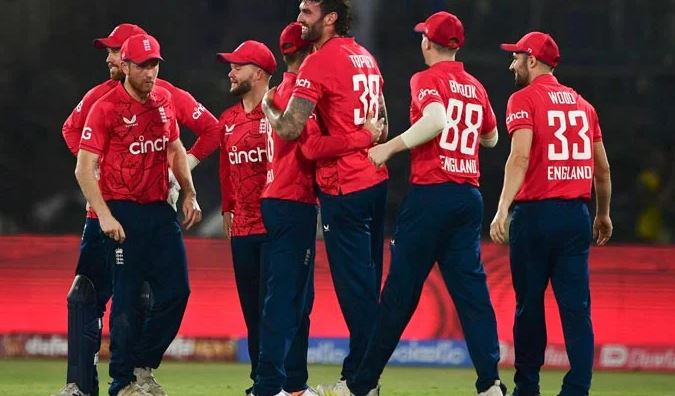 KARACHI: National Stadium here was the venue where England Cricket Team beat the Green Shirts by 63 runs in the third T20I on Friday 22nd of September, 2022.

After winning the toss green shirts invited the guests to bat first. Red Shirts, that mustered 221 runs up, were launched to the victory by middle-order batters Harry Brook (who scored 81 runs off 31 balls) and Ben Duckett (whose bat yielded 69 runs off 42 balls).

Though Green Shirt Shan Masood (middle order batter) played well and scored 65 runs off 40 balls eight of his teammates went back to the pavilion after scoring 158 in 20 overs enabling the visitors take a lead of 2-1.

Shan Masood maintained: “We must give credit to England for the way they played. First how they batted specially Ben Duckett and Harry Brook and then their bowling in power-play, the way Reece Topley and Mark Wood bowled and got our top order out was outstanding,

“When you’re playing against a top side, a quality side then they’ll always come up with their best game. We have to learn from our mistakes and make sure that we don’t repeat them.

“The way we played in 2nd T20I, we have showed that we can achieve any target. I am sure we’ll bounce back in the series, we will learn from our mistakes and try not to repeat them when we’re back on field on Sunday”.

On 25th of September, 4th match will be played in Karachi;

On 28th, 30th September and 30th October last three matches will be played in Lahore.