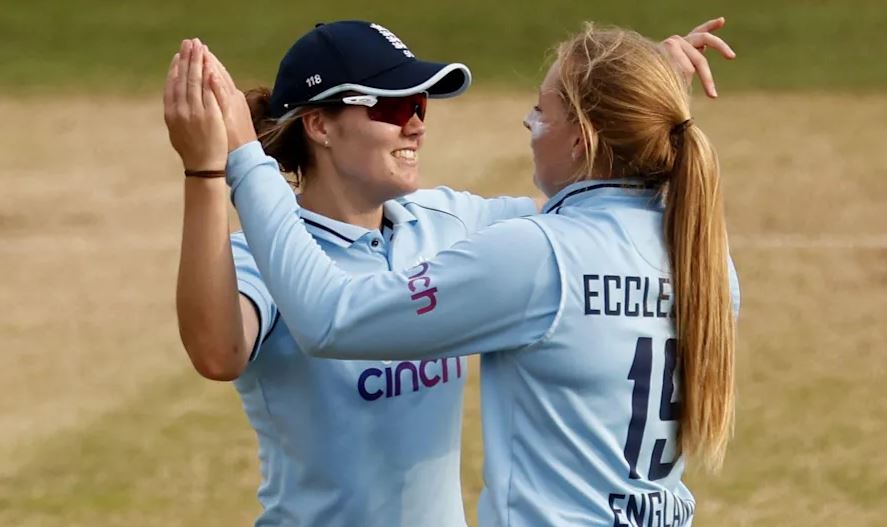 WELLINGTON: England snatched a late berth in the Women’s Cricket World Cup semi-finals with a crushing 100-run victory over Bangladesh in their final group stage match in Wellington on Sunday.

But India, who also started the day with a must-win opportunity to make the playoffs, were denied by South Africa in a last-ball thriller in Christchurch.

South Africa had already qualified for the final four along with unbeaten Australia and the West Indies, whose place was only confirmed when India lost.

England’s win sealed a dramatic resurgence for the defending champions, who had been on the brink of elimination after losing their first three matches in the 50-over competition.

They then won their remaining four games to secure a place in the top four.

Captain Heather Knight said it showed the character of the side to bounce back from their early losses when “obviously we didn’t play particularly well” and then handle the pressure of a do-or-die clash with Bangladesh.

She said she had “one eye on the net run rate and one eye looking after the bowlers and trying to freshen a few of them up for the semi-final… but the main thing was getting the win”.

England lost wickets at regular intervals in the first half of their innings and were 96 for four before Sophia Dunkley, who scored 67, led a middle-order charge to get the score up to a defendable 234 for six.

Bangladesh found it difficult to score against a tight England attack, averaging just 2.79 runs per over until they were all out for 134 with 12 balls remaining.

Player-of-the-match Dunkley faced just 72 deliveries and featured in a 72-run partnership with Amy Jones (31) for the fifth wicket and then put on 43 with Katherine Brunt (24 not out).

Salma Khatun, who took the prized England wickets of Knight for six and Nat Sciver for 40, finished with two for 46.

Bangladesh never threatened to get near the English total despite a safe start by Shamima Sultana and Sharmin Akhter, who put on 42 for the opening wicket.

They were tied down by a penetrating England bowling attack led by Sophie Ecclestone, who took three wickets in her 10 overs for a miserly 15 runs – while Brunt, although wicketless, conceded only seven runs from her five overs.

– Last ball –
India, needing to beat South Africa if they were to pip the West Indies for the fourth semi-final spot, posted 274 for seven with Smriti Mandhana, Shafali Verma and captain Mithali Raj all scoring half-centuries.

Mandhana (71) and Verma (53) put on 91 in their opening stand while Mandhana and Raj (68) added 80 for the third wicket with a score in excess of 300 on the cards until South Africa restricted India to just 51 runs in the final 10 overs.

South Africa, needing to produce their highest successful ODI chase to win, saw Laura Wolvaardt and Lara Goodall take the total to 139 for one by the 27th over.

The chase lost steam when Goodall was out for 49, with Wolvaardt gone for 80 in the following over.

But a late charge led by Mignon du Preez (52 not out) saw South Africa home, with du Preez scoring the winning run on the final ball of the match.

“It will probably take some time to settle the emotions” said Raj.

“It went to the last ball so I think it is good for the sport but definitely for the Indian team it ends our campaign.”

India finish 2016 as top-ranked Test side