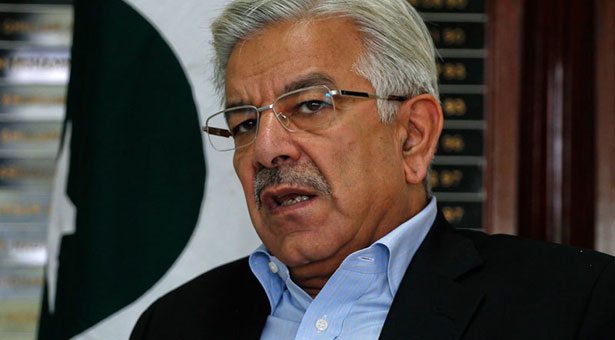 He expressed these views while addressing the worker’s convention of Pakistan Muslim League-Nawaz (PML-N) held at Vario House Sialkot Cantt.

The Federal Minister said that neither investigation was done nor FIR had been registered till yet of the firing incident.

Khawaja Asif said these people were trying to register FIR according to their desires and that was the reason that no FIR had been registered till now.

He said that the federal government was fully prepared to fulfill its responsibilities, but where this tragic incident took place, it was the responsibility of the Punjab government to provide security to the march and its participants.

The Federal Minister said that providing security to the PTI long march was the responsibility of the Punjab government, which was a proof of its failure.

Therefore, blaming the failure of the Punjab government on someone else was not correct, he added.

He said that the accused of the incident was detained by the Punjab police and also recorded his video statement in which the accused had confessed to the shooting.

He said that everyone knew the situation of the long march, when they reached Gakhar, Wazirabad, people left him and where this incident happened, there were only around 2500 people.

The Federal Minister said that before 2018 elections, Imran Khan made promises to the people to give millions of jobs and houses. What promises were fulfilled by Imran Khan, he questioned.

He said that people knew the real face of Imran Khan and they were not supporting the PTI.

The Defense Minister said that Imran Khan’s narrative was to eliminate corruption but he himself had been disqualified over corruption.

He said that the country’s economy was on the right direction.

The Federal Minister said that on the instructions of Nawaz Sharif, the series of workers convention had been started, saying that the worker’s conventions were vital to end communication gap, which would have positive results in the future.

He said that the workers of Pakistan Muslim League-Nawaz should pay attention to social media because now politics was not like 90s. Make effective use of social media and strengthen public relations there.

On August 2023, the current assembly would complete its term and general elections would be held 90 days after that, he said.