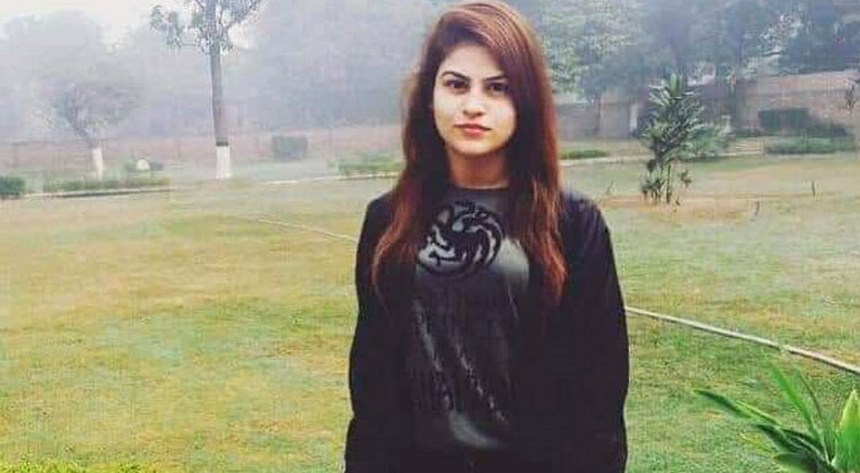 KARACHI: According to DIG Sharjeel Kharal, Dua Mangi 20, who was kidnapped by unidentified people from Bukhari area of DHA at 8PM on Saturday 30th of November, reached home last night. Her family members refused to share any information in this regard with the Media. 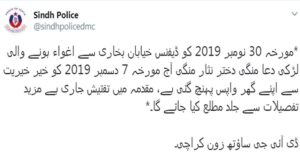 She was strolling with her friend Haris Fatah at the time of incident who was shot and wounded by kidnappers on putting up resistance.

KARACHI: One hundred people converged at 3 Talwar here today (Tuesday 3rd of December, 2019) to stage a sit-in against failure of Police and other agencies to trace out the whereabouts of the kidnapped Dua Mangi, 20, and her abductors.

On Saturday (30th November, 2019) at 8 PM five unidentified gunmen kidnapped Dua Mangi and shot her friend, Haris Fatah who resisted, in DHA’s Bukhari Commercial area. She was walking with the boy at that time.

Abdul Fatah, Father of the injured boy, has got a FIR registered at Darakshan  PS against the abductors u/s PPC regarding abduction and 307 (attempted murder).

Incidents of trafficking & kidnapping of women & children are on the rise in Pakistan: Zia Awan

KARACHI: Zia Ahmed Awan Advocate has said that incidents of trafficking and kidnapping of women and children were on the rise in Pakistan. He quoted Madadgaar National Helpline’s statistics of registered trafficking cases.

Zia Awan explained that statistics show a growth of trafficking by 46% since 2010 and these are just registered cases. Many of these cases go unregistered as Police do not bother taking it seriously.

He added that missing/kidnapped children, who are also in great numbers (6983 registered cases since 2010,) are most vulnerable to inter-city or inter-province trafficking especially girls who might be trafficked to Afghanistan or Baluchistan.

Also, during Hajj and Umrah girls could be trafficked with family to Middle-East. The missing and kidnapped children and women may also be used for organ smuggling and as child brides. He said that once a child is trafficked, it becomes most difficult to track as there are no coordination mechanisms among provincial authorities that may inform prevention of inter-provincial trafficking of children.

Zia held that not lodging the FIR was justice delayed. Hence Police is denying justice to children and their families. He warned that failure of Police will only give free hand to such mafias active across Pakistan and many more families will suffer the consequences.

A CASE STUDY: Addressing a Press Conference here Zia Awan Advocate told the media that two minor girls Fauzia (Noor Begum) and Alishba were trafficked from Karachi to Dera Murad Jamali, Baluchistan while Police demonstrated typical administrative delays and failed to recover them. Parents of the two trafficked minor girls were also present on the occasion.

He further told that 12-years-old Fauzia (Noor Begum) and 6-years-old-Alishba, daughters of Noor Nabi, went missing near their home in slum of Machar Colony, Kemari Town, Karachi during July 2015. They went out to buy some sweets and never returned.

He told that the parents approached the  Madadgaar on 11 August 2015 and requested their help in  finding their daughters. Madadgaar supported them in contacting Edhi Centers, the Police and other avenues of support in this matter. He said that for over a year, Police did nothing and no FIR was lodged.

Only a missing children entry was lodged in register of Police Station, Docks. He further discussed the plight of parents and how they tried to find their daughters all over the city with no resources and no one to guide them except Madadgaar.

Zia Ahmed Awan told that the father came to know about his daughters living in Edhi Center at Sohrab Goth and went there on 9 August 2016. When he got there he found out that his daughters were not there. He called Madadgaar who reached out to Anwar Kazmi and informed him about this situation.

He ensured Madadgaar that all the related information on this case will be provided urgently to Madadgaar by Edhi. He said we found that two persons took the sisters from there on 27 May 2016. One of them pretended to be Noor Nabi.

At Edhi Center only a photograph was taken as documentation of reunification and no other information or client history was taken before handing over the girls to that person.

Zia Awan told the media that a letter was sent by Madadgaar to SHO Police Station Samanabad on 16 August 2016 with all documentation and file to lodge and FIR against the primary suspect. After much efforts and coordination with the DIG, DSP and SHO, the FIR was lodged on 22 August 2016.

He told  that Police has apprehended a relative of Shafi named Farooq and other primary suspect Inayat, they are now in Police custody and they told that Shafi has taken the girls to Dera Murad Jamali, Balochistan.

Zia demanded that minor girls, Fauzia (Noor Begum) and Alishba, must  be recovered safely as soon as possible by the Police and strict action taken against their traffickers.