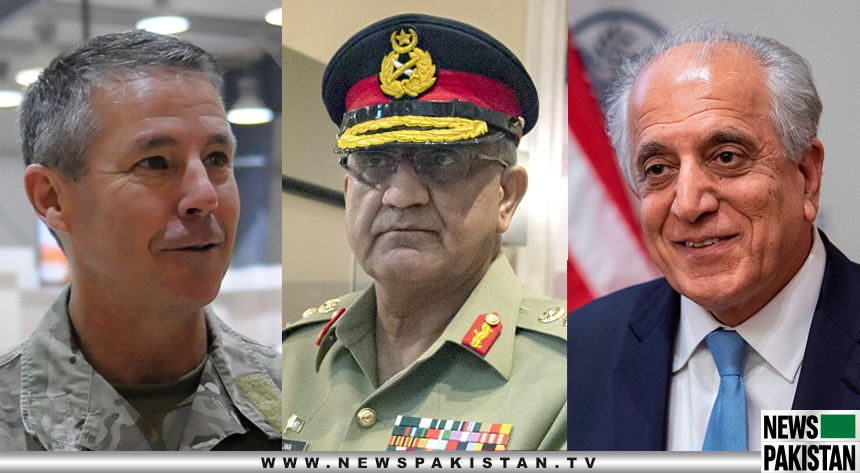 In a meeting with COAS General Qamar Javed Bajwa, Ambassador Khalilzad and General Miller discussed the United States’ ongoing efforts for a sustainable peace in Afghanistan.

Pakistan’s military leaders reaffirmed their support for US efforts and renewed their commitment to act to advance a political settlement to the conflict.

Zalmay Khalilzad, United States Special Envoy, has taken to Twitter to inform about a rendezvous with Taliban leader Mullah Abdul Ghani Baradar and his team.

“I met Mullah Berader and his team last night for a candid discussion bout next steps, followed by a constructive phone call with President Donald Trump. We all agreed the purpose of the US-Taliban agreement is to pave the path to a comprehensive peace in Afghanistan,”  Khalilzad stated. 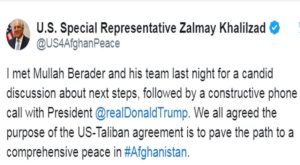 They agreed that the increase in violence is affecting the peace agreement and must be resolved immediately.

Khalilzad informing that the exchange of prisoners was discussed, stated that the US was committed to facilitating the exchange as agreed in the US-Taliban agreement and the US-Afghanistan Joint Declaration.

US Envoy maintaining that all obstacles in the way should be cleared  urged Afghans to put the country first and work towards ensuring peace.

“I once again call on all Afghans to rise to the occasion, put country first and not to lose this historic opportunity,” he held.

US conducts airstrike against Taliban

WASHINGTON: A spokesman of American Government has taken to the Twitter to inform: “The US conducted an airstrike on (Wednesday) March 4  (2020) against Taliban fighters in Nahr-e-Saraj, Helmand, who were actively attacking an ANDSF checkpoint. This was a defensive strike to disrupt the attack. This was our 1st strike against the Taliban in 11 days”. 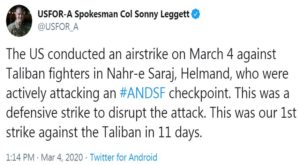 The spokesman further informed: “On March 3rd alone, the Taliban conducted 43 attacks on ANDSF checkpoints in Helmand. The Taliban claim to be fighting for free Afg. from int’l forces, the Feb 29 agreement provides a condition-based path to withdrawal.” 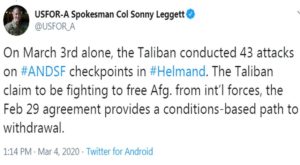 According to details, in response to their attacks that claimed lives of 20 Afghan army and police personnel,  US conducted an airstrike against Taliban fighters in Helmand province today.

It is pertinent to mention  here that Afghan President Ashraf Ghani had rejected a clause relating to the swap of prisoners, while Taliban maintained there would be no talks until the incarcerated 5000 Talibans were released.

KABUL: The much trumpeted  Doha Peace Deal  between US and Afghan Taliban, signed a couple of days ago, was shattered via motorcycle bomb blast carried out during a football match in Khost by militants, killing three and injuring eleven.

There is a subtle and vague misunderstanding: Taliban had agreed to a week-long reduction of violence as a confidence-building measure ahead of the agreement signed on 29th February, 2020.

While Ghani’s spokesman Sediq Sediqqi had maintained that the Afghan government had not made any commitment to release 5,000 Taliban prisoners before the start of any potential negotiation, Taliban stated that there would be no peace talks without the release of prisoners.

It may be noted that 5000 Taliban prisoners are supposed to be released by 19th of March, 2020 in exchange for 1000 incarcerated by the insurgents.

DOHA: The US and Taliban have signed Peace Deal here today (Saturday 29th of February, 2020) in order to end the US’s longest war following two years of  negotiations.

The treaty that was signed by Taliban leader Mullah Baradar and Zalmay Khalilzad (US Special Representative for Afghanistan Reconciliation) was witnessed by representatives from thirty countries including Shah Mehmood Qureshi, FM of Pakistan.

The 18-year-long war that began after 9/11 had claimed tens of thousands of lives. In a US-Afghan joint statement it was proclaimed that American forces would withdraw completely within 14 months provided Taliban uphold their end of the deal.

Following the signing ceremony, US Secretary of State Mike Pompeo,  commenting on the development, stated: “We have endured decades of hostility; previous talks have faltered. The agreement we will sign today is a true testament of our actions.

“Violence levels have reached the lowest point in the last 40 years. The Taliban have demonstrated that when they have the will to be peaceful, they can be.

“We are just at the beginning — furthering the cause of peace will require sacrifice by all sides. This agreement will not mean anything if we do not take concrete action on the promises made today.

“Keep your promises to cut ties with Al Qaeda; keep up the fight to defeat ISIS. All Afghans deserve to live and prosper without fear. The Afghanistan of 2020 is not the same as the Afghanistan of 2001. If you remain committed to negotiations with the Afghan government, we and the international community will reciprocate.”

Speaking on the occasion Taliban leader Mullah Baradar stated: “The agreement is good for the nation of Afghanistan and the international community. I congratulate everyone.

“The Afghan nation has been suffering for the past four decades and we hope that with the withdrawal of foreign forces from Afghanistan, the nation will embark on a new and prosperous life.

“We all want unity and prosperity of our nation. I call on all Afghan factions to honestly and sincerely for the establishment of a strong Islamic system come to the negotiations.

“I would like to thank the Pakistanis for their work and assistance for this peace. I will also like to thank China, Uzbekistan, Russia, Iran and other countries who supported the peace process. I hope that they will participate in the rebuilding of Afghanistan.”

Trump complains of being treated ‘unfairly’