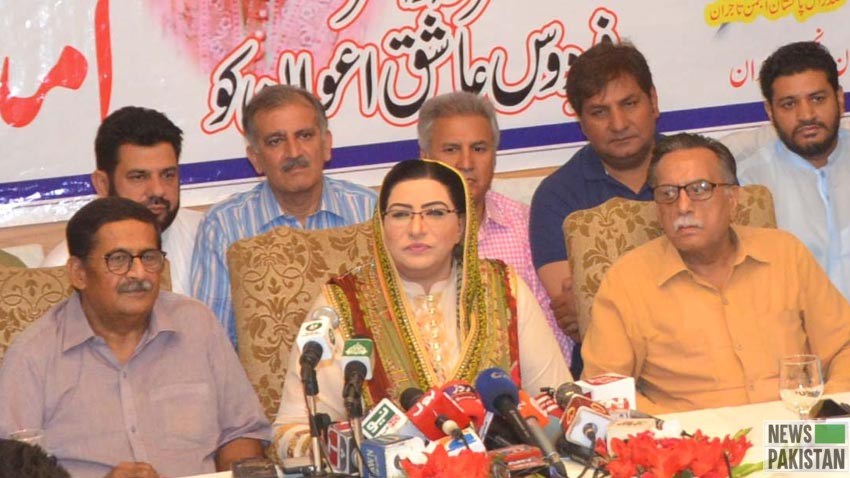 ISLAMABAD: US President Donald Trump’s mediation offer on Kashmir reflected growing  acceptance of bold stance of PM Imran Khan on genuine national rights and interests, said Special Assistant on Information & Broadcasting,  Dr. Firdous Ashiq Awan here today.
Addressing a press conference, she said effective and solid measures  adopted by the PTI Government for a corruption-free society, institutional  reforms, empowerment of institutions and rule of the law, had markedly  helped change the world perception about Pakistan.
“Recognition of Kashmir as a “dispute” reflects a positive change in  President Donald Trump’s approach, who through his tweets since assuming US president office and even before, was known for his negative impression  about our country,” she said. Highly appreciative of the successful (ongoing) US visit of the Prime  Minister, Firdous Ashiq Awan said a leader with immense face-value and  credibility due to sheer commitment to his principled stance, has helped  combat anti-Pakistan impression, created by ‘strong’ enemies of the  country.
“This is because he holds no backlog of corruption,” she said reminding that India over the years had been able to successfully sell its narrative about Pakistan and its support to the struggle of Kashmiris, by hiring lobbyists.
“It is now being successfully countered by Pakistan,” she commented.
She said Indian efforts to weaken cause of Occupied Kashmir and get freedom fighters declared as terrorists, had effectively been defeated and added now the international support can be ensured for the just cause of Kashmir and its people.
“Imran Khan not only repeatedly kept apprising the international community about Pakistan’s commitment to the cause of peace but through his actions also communicated the country’s absolute firmness in this regard,” said the PM’s Special Assistant on Information and Broadcasting.
Establishing Pakistan as a strong proponent of peace and also getting it through that, may not be construed as any weakness on part of the country since getting shot down Indian planes intruding into air space and then returning one of their pilots, had a meaningful impact  on international perception about Pakistan, she added.
“There is definitely an important role of civil and military leadership  and there is a paradigm shift in this regard,” emphasized the PM’s  special assistant.
Reminding that US President has also cited Pakistan as a key partner of his country, she said this was again the outcome of  proper image-building of the country.
She said : ” Imran Khan’s first visit to US as PM is not to procure any aid but to protect interest of the country and this he has well  established.”
As for statement of US President about Pakistan being a key partner, the Special Assistant said US and Pakistan were important strategic partners in the realm of defence and economy.
“US is the largest market for our exports and the largest foreign direct investment also comes from US while remittances sent by US based Pakistanis is also a significant contribution,” she added.
Yet, it has been made clear that there would be no compromise  at the cost of country’s internal and external interests, she said.
“Gone are the days when national interests were compromised  over individual benefits,” she added.
On a question about accountability of corrupt people, she said  PM Imran Khan has emphasized that jails should be means of  deterrence and not recreational centres or luxury hotels.
Mentioning 25th July, declared as Day of Protest, would be observed  by the nation as a Day of Accountability, Dr. Firdous Ashiq Awan said  corruption and wrongdoings of the opposition leaders were increasingly  becoming evident.
On a question about increase in cost of living, she said no raise  had been made on food items and it was almost 80% responsibility of the provincial government to control the situation.
“The Federal government will definitely provide all support to the provincial governments in evolving an efficient mechanism against  the culprits,” she added.
To a query regarding “No Confidence” move of the opposition against Senate Chairman, she said that treasury benches have  submitted a similar application against the Deputy Chairman and  as per Constitution the matter was now before the President of  Pakistan to decide.
About repatriation of Afghan refugees to their homeland, the Special Assistant on Information and Broadcasting said a major  headway was made during the last visit of Afghan President and  things would be duly streamlined in this regard.
Regarding the problems faced by Karachi residents, she said  the federal government was giving an additional amount of Rs. 200 billion to the Sindh Government against its due share in  the sphere of development.
Being an economic and political face of the country and deemed  a barometer for the entire country by the foreign visitors and investors, the federal government was committed to play its role in improving  the situation.
“PTI government will support provincial government in schemes related to clean drinking and desalination plant for the city and hopefully this would be done during the current tenure of PTI federal government,” she said.