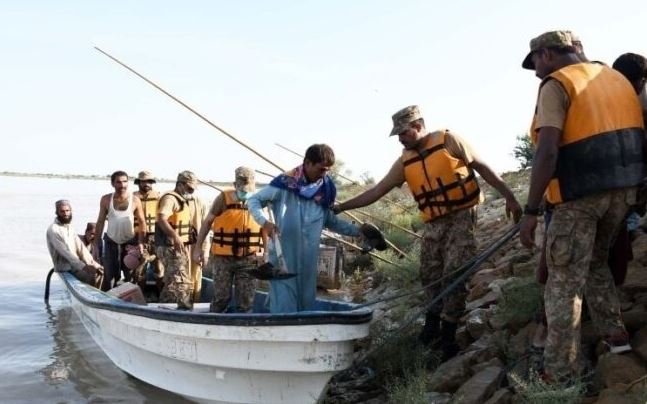 ISLAMABAD: Ministry of Interior has approved the deployment of Pakistan Army in all four provinces to assist the civilian governments keeping in view the emergency situation due to heavy rains and floods.

The summary for deployment of the army under Article 245 of the Constitution was sent to the Federal Cabinet for final approval, said a press release issued here Friday.

The four provincial governments had sent a requisition to the Interior Ministry for deployment of army in the flood-affected areas.

Interior Minister Rana Sanaullah said that armed forces were being deployed to assist the civilian government in relief and rescue operations, under Article 245 of the Constitution.

The Pak Armed Forces were being deployed in the flood-affected areas of the four provinces, he added.

He said the Punjab government has requisitioned the deployment of armed forces in the flood-affected areas of Dera Ghazi Khan district.

The Khyber Pakhtunkhwa government has requested the deployment of army in the flood-affected areas of Dera Ismail Khan district, he added.

The minister said the Balochistan government has requisitioned for deployment of army in Naseerabad, Jhal Magsi, Sahabpur, Jafarabad and Lasbela districts while the Sindh government has requested to deploy the army to help the provincial government in flood-affected areas.

He said control room set up at the interior ministry has regularly monitoring the flood situation. Flood affected people would not be left alone and saving their lives was the first priority of the government.

Sana said the federal government was providing necessary human and financial resources to all the provinces.

It is pertinent to mention here that Armed Forces have already been helping the people in distress.

Pakistan army teams rescued an enormous number of people stranded in affected areas including women and children along with their belongings and shifted them to safer places.

People living in relief camps were being provided with cooked food and dry ration.

Pak Army medical corps personnel have been running Medical Camps, equipped with all necessary facilities, to help the flood affectees.