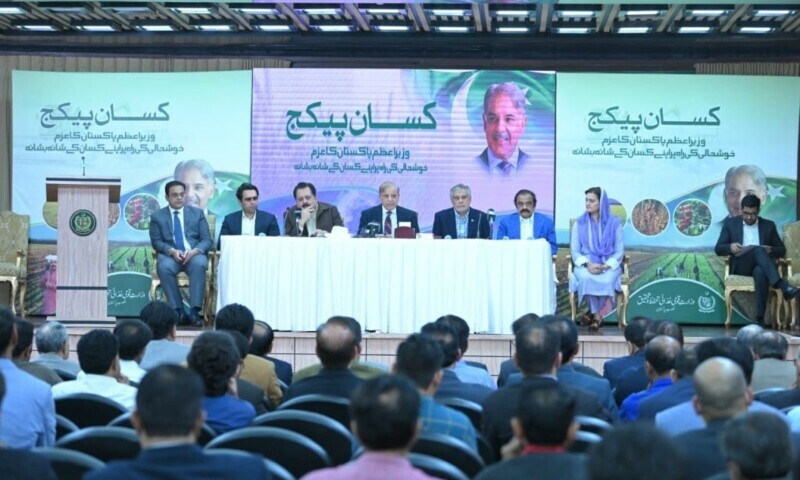 ISLAMABAD: PM Shehbaz Sharif Monday (31st of October, 2022) announced a special package of Rs 1800 billion to promote agriculture sector and provide farmers, particularly in the flood hit areas free seeds, inexpensive loans and to bring down prices of fertilizers and electricity for tubewells.

Announcing the agriculture package while addressing a press conference here, he said the economic progress of Pakistan was dependent on agriculture sector and Rs 1800 billion spending on agriculture would be an increase of Rs 400 billion as compared to the last year.

The Finance Minister would ensure the delivery of loans to the farmers, he said adding Rs 10.6 billion were allocated for small farmers across the country while Rs eight billion would be given to the small farmers in the flood-affected areas.

In the rural areas, unemployed youth in the agriculture sector will be given loans of Rs 50 billion and Rs 6.5 billion will be given for subsidy to waive off mark up on these loans.

He said the prices of DAP would be reduced by Rs 2500 per bag, resulting in a benefit of Rs 58 billion to the farmers. The price of a DAP bag would come down to Rs 11250.

He said the prices of DAP were brought down after tough negotiations with the fertilizer sector, adding DAP had an important role in increasing the per acre yield of crops.

Shehbaz Sharif said 1.2 million bags of certified seeds worth Rs 13.20 billion would be distributed among the farmers and the federal and provincial governments will share the funds required for it.

The landless farmers in the flood affected areas will be given Rs five billion, he said adding small and medium enterprises working in the agriculture sector would also be given loans of Rs 10 billion for modernization schemes.

He said second hand five year old tractors will be imported with a relaxation of 50 percent in duties and the government would also encourage entry of new tractor manufacturers by decreasing duty on completely knocked down kits from 35 percent to 15 percent.

He informed that half a million tonnes of urea will be imported at a reduced price. 200,000 tonnes of urea had already been imported and the government will give subsidy of Rs 30 billion to give the fertilizer to the farmers at a lower cost, he added.

The prime minister said one million tubewells in the country were run on electricity and under the new package the government would provide interest free loans for 300,000 tubewells for their solarization so that farmers would get free of cost electricity.

Despite all the difficulties, the government had decided to fix electricity cost at Rs 13 per unit for these tubewells and it would also pay subsidy of Rs 43 billion to help the farmers in paying the loans for the solarization, he noted.

The PM recalled that the last government of prime minister Nawaz Sharif also gave financial support of Rs 100 billion to the small farmers.

The new package would help in the rehabilitation of farmers, particularly those whose standing crops including rice, sugarcane, wheat and dates, on four million acres were destroyed by the floods, he observed.

He said financial assistance of Rs 88 billion was already given to the flood affected people, adding Rs 70 billion were given through the Benazir Income Support Programme while the remaining amount was given for material help like food, tents and blankets through the National Disaster Management Authority (NDMA).

While responding to the questions of journalists, the prime minister said the government was working to provide relief to the electricity consumers.

Hamza Shehbaz Sharif as chief minister Punjab allocated Rs 100 billion to give relief to the consumers who were using 100 electricity units, he added.

He said fuel adjustment charge on electricity bills was deferred by the federal government and the finance minister would convince the International Monetary Fund (IMF) on the issue.

He asked the provincial governments to break cartels and bring down prices of edible items and make the price control committees active to stop price gouging.

To a question about the auto sector, he said the government would look into the issues related to the auto sector to make it more beneficial for the consumers.

He invited foreign and domestic investors to invest in the manufacturing of tractors.

Shehbaz Sharif said the government had no control over the imported inflation, adding he was monitoring the prices of oil and gas in the international market for providing relief to the consumers.

To a question, he said National Disaster Management Authority (NDMA) had provided financial assistance in the flood-affected districts of South Punjab and the record was available for all to see.

He pointed out that it was the responsibility of the Punjab government to force industrialists to start the sugarcane crushing season and eradicate fake insecticides.

He said the agriculture package addressed the concerns of the farmers who came to Islamabad to demonstrate for their demands.

Various sectors have welcomed the Kisan package announced by Prime Minister Muhammad Shehbaz Sharif and termed it historic and record in the history of Pakistan.

This amount was Rs.400 billion in excessive to the amount allocated last year for this purpose which clearly indicated that the coalition government was sincere for the uplift of agriculture sector, he added.

He said that despite financial crunch, the government had taken bold step to allocate huge funds to give a quantum jump to agriculture production in addition to facilitating the farming community so that it could play its pivotal role to make Pakistan self-reliant in agriculture production.

He said the government departments negotiated with the concerned quarters to make a cut of Rs.2500 per bag in the price of DAP fertilizer.

Now this commodity would be available at Rs.11250 per bag and the farmers could get benefit of Rs.58 billion under this head which would reciprocally encourage enhancement in agri production, he added.

He said the government was also importing 500,000 tons urea fertilizer to facilitate the growers.

In this regard, 200,000 tons urea had already reached Pakistan whereas remaining quantity of 300,000 tons would also be imported soon.

The government had negotiated with fertilizer manufacturers and succeeded in reducing its price which clearly indicated the sincerity of present government for uplift of agriculture sector, he added.

He appreciated the distribution of 1200,000 bags of certified seeds among the farming community of flood-hit area and said that this step would provide a benefit of Rs.13.20 billion because the federal and provincial governments would bear its expenditure.

Allocation of an amount of Rs.5 billion to grant interest-free loans to the Haries of flood-hit area was also a hallmark step of present government, he said and hailed the allocation of Rs.10 billion for providing agri loans through banks.

This step would make Pakistan self-reliant in addition to bring a positive socioeconomic change especially in far-flung rural areas, he added.

MPA Ali Abbas also appreciated the Kisan package and said that the government was contemplating to encourage cheap manufacturing of tractors within the country but the manufacturers were not ready.

Therefore, the government decided to reduce duty tariff on the import of five-year used tractors. This step would also promote mechanized farming in the country, he added.

He appreciated the import of 2.6 million tons wheat to overcome its shortfall and said that fixation of electricity tariff at Rs.13 per unit for agri tube wells was also another hallmark step of present government.

He said the government also intended to convert agri tube wells on solar energy and in this connection the government would also provide interest-free loans to the farmers.

These basic and fundamental measures would bring a qualitative improvement in agriculture sector just within 4 months, he added.