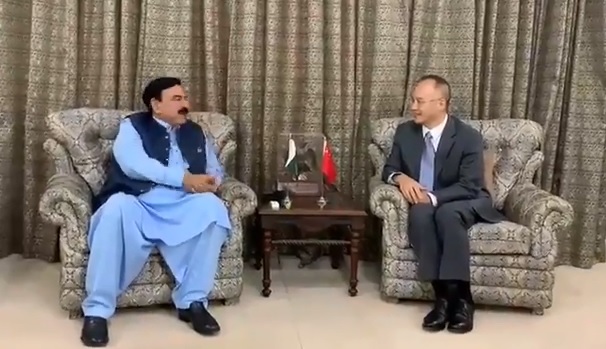 ISLAMABAD: Minister for Interior, Sheikh Rasheed Ahmad on Sunday (22nd of August, 2021) said that foolproof security would be ensured to Chinese citizens and companies functioning in Pakistan.

Sheikh Rasheed was speaking to the Chinese Ambassador to Pakistan Nong Rong who visited him at his residence to discuss matters of mutual interest between the two countries. During the meeting, the Chinese envoy and the interior minister also discussed the bilateral ties between Pakistan and China and the overall regional situation. Sheikh Rasheed said that the region has got great importance due to changing situation in Afghanistan. He added long-lasting peace in Afghanistan was important for the region as well as for the international world.

He said that Pakistan will continue playing its role in maintaining peace in Afghanistan and for a stable government. He added the government of Pakistan was providing full assistance to those leaving Afghanistan. The minister told the Chinese envoy that the government will take further measures to ensure security to Chinese nationals working in Pakistan. He said that a joint strategy was being prepared for the security of Chinese citizens. He added, “No one can become a hurdle in the relations and joint ventures between Pakistan and China”.

The Chinese envoy said that a number of Chinese companies were working in Pakistan on several projects. He said that the Chinese government was thankful to the interior ministry for the provision of facilities to its nationals working in the country. It is pertinent to mention here that two children lost their lives when a suicide bomber blew himself up on Friday (20th of August, 2021) near a car that was carrying Chinese nationals at Baloch Ward area near Gwadar’s Eastbay Expressway.

anned Balochistan Liberation Army (BLA), Majeed Brigade, had claimed responsibility for the attack. According to sources children who died were playing nearby while three people riding the car (including the driver and a Chinese national who is presently in stable condition) received minor injuries. It is pertinent to mention here that earlier the Gwadar Police Control Room had proclaimed that three children got wounded due to the suicide-blast who were being provided medical treatment at GDA Hospital here.

Brittney Stewart, the new spokesperson of US CG Karachi (Video and Text)