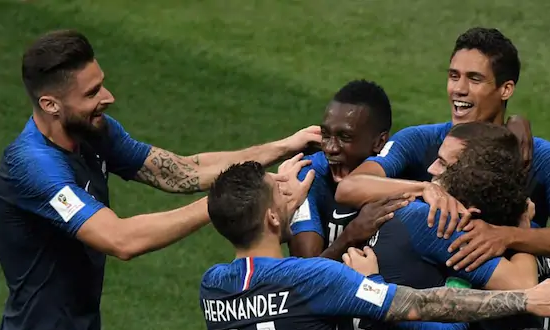 In a match that had a bit of everything, Mario Mandzukic scored the first ever own goal in a World Cup final to put France in front at the Luzhniki Stadium, only for Ivan Perisic to equalize.
However, Antoine Griezmann’s penalty put France back in front after Perisic’s handball was penalized with the aid of the video assistant referee, before Pogba and Mbappe both scored in the second half.
The first team to score four times in a final since Brazil in 1970, the French could even afford to see Mandzukic pull a goal back following a ridiculous goalkeeping mistake by Hugo Lloris.
France join Uruguay and Argentina in winning the World Cup for the second time, after their 1998 triumph over Brazil when Didier Deschamps — now the coach — was the captain.
The game will be remembered as the highest-scoring World Cup final since England’s win over West Germany in 1966, and for Mbappe becoming the youngest player to score in the final since Pele in 1958.
But while the celebrations begin on the Champs Elysees avenue in Paris and across France, Croatia will wonder what might have been had the first-half penalty not been awarded just as they were in the ascendancy.
The smallest country to reach the final in the modern era will feel they were ultimately beaten by modern technology.
The questions before the match surrounded whether a tired Croatia side could pick themselves for this game after needing extra-time to beat England in the semi-finals.
Croatia played all the football early on, with Mbappe on the fringes of the game, but it was France who went in front in the 18th minute.
Griezmann won a soft free-kick wide on the right and his delivery into the area was flicked into his own net by the unfortunate Mandzukic. It was harsh on Croatia, especially with Pogba possibly a fraction offside when the free-kick was played.
Zlatko Dalic looked rueful, but his team continued to assert themselves and were back level just before the half-hour, Domagoj Vida laying the ball off for Perisic, who shuffled the ball from right foot to left before drilling a superb shot past Hugo Lloris with the aid of a touch off Raphael Varane.
But Perisic was at the center of the controversy that led to France’s second goal in the 38th minute.
His handball at a corner could hardly be described as deliberate, but Argentine referee Nestor Pitana reviewed the video by the side of the pitch and gave the penalty.
As a thunderstorm erupted in the sky over Moscow, Griezmann stroked home the penalty, his fourth goal of the competition and his third from a spot-kick.
It was also France’s first actual attempt on goal, but they picked off Croatia after the break.
Shortly after three pitch invaders briefly interrupted proceedings, the third French goal arrived in the 59th minute.
Pogba started the move with a drilled pass for Mbappe on the right. His cutback found Griezmann, and he laid the ball off for Pogba to score at the second attempt from 18 yards.
Mbappe then added his name to the scoresheet in the 65th minute when he collected a Lucas Hernandez pass and fired low past Subasic from 25 yards, capping what has been a fine tournament for the 19-year-old.
That should have been that, but Croatia were given something to cling to as Lloris absurdly tried to dribble away from Mandzukic on the edge of his six-yard box, and the striker stuck out a foot to divert the ball in.
But for Lloris the World Cup winner’s medal will help make up for the embarrassment of that moment. France coach Didier Deschamps hailed his side’s “wonderful” World Cup victory after a 4-2 victory over Croatia in Sunday’s final at Moscow’s Luzhniki Stadium.
The 49-year-old becomes only the third man to win the World Cup as both a player and a coach after leading France to their maiden title in 1998 as captain.
“It’s so beautiful, so wonderful,” Deschamps told French TV channel TF1.”I’m really happy for this group… It wasn’t always easy, but by working hard, listening, they are on top of the world for four years.” France erupted in joy on Sunday as the country clinched the World Cup, with fans streaming into the streets, honking car horns and flying the tricolor flag at the start of an enormous national celebration.
Cheers rang out throughout the country for each of four goals in the final as “Les Bleues” beat Croatia, transforming the young team into national icons 20 years after the country’s first World Cup triumph in 1998.
The most delirious scenes were in the fanzone near the Eiffel Tower where 90,000 people packed out a park in front of a giant screen, while other fans filled the Champs Elysees even before the final whistle rang out.
Hundreds of thousands partied on the capital’s most famous boulevard after France’s semi-final victory against Belgium last Tuesday with the crowds on Sunday expected to rival those of 1998 when more than one million gathered there.
The bells of Notre Dame cathedral in central Paris also rang out in the immediate aftermath of the game to mark the triumph.
Security will be in the back of fans’ minds after more than three years of deadly attacks that have claimed around 250 lives, with extremists often targeting crowds enjoying a night out.
France has deployed 110,000 police and security forces across the country over the weekend and security forces have blocked all traffic around the Champs Elysees area.
With success on the pitch, a country riven by tensions and still shaken by a string of terror attacks since 2015 has been able to revel in a newfound feeling of togetherness.

Meanwhile, French President Emmanuel Macron congratulated Russia’s President Putin for his “perfect” organization of the World Cup as the two leaders prepared to watch the final on Sunday.
Macron and his wife Brigitte met the Russian leader at the Kremlin on Sunday afternoon before the match between France and Croatia at Moscow’s Luzhniki Stadium.
Macron told Putin he wanted “to congratulate you as the organizing country for how well this event has passed off. It has not only been watched around the world, but the whole world has come here” to watch it.
“To do it in safe conditions and with everything going perfectly was a challenge, so well done for that.”
Putin congratulated France for having reached the final.
“I am sure we will see an interesting, intense, close match which millions of spectators across the world will enjoy,” he said.
Putin met earlier with Croatian President Kolinda Grabar-Kitarovic.
She congratulated him on his hosting of the competition, saying it was an “example of how such an event should be organized”.
She presented Putin with a Croatia number-9 football shirt inscribed with his name.
Several other world leaders and sporting and show business stars were due to attend the final. 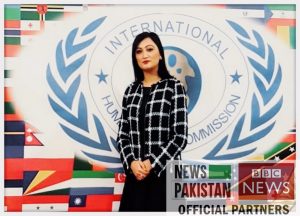 PS: France won their second World Cup 20 years after their maiden triumph on Sunday, seeing off a dogged and desperate Croatia side who refused to lie down in one of the most electrifying finals in recent years.
The breathless 4-2 victory under stormy skies at Moscow’s Luzhniki Stadium means Didier Deschamps’ side – balancing youthful vitality and tournament nous – have buried the pain of their defeat in the Euro 2016 final on home soil.
For the small nation of Croatia, the loss spells bitter pain but fans at home will celebrate the best run in the nation’s history, which featured a stunning win against Argentina and a semi-final victory against England.
Earlier, Croatia’s fans, massed behind Danijel Subasic’s goal, unveiled an enormous flag during their national anthem and their side roared out of the blocks, pinning France back in their own half.
It was the French who scored first, courtesy of an own goal in the 18th minute by Mario Mandzukic following an Antoine Griezmann free-kick but they were pegged back by a lovely Ivan Perisic strike 10 minutes later.
Griezmann restored France’s lead from the penalty spot after the referee awarded a controversial spot-kick with the help of VAR (video assistant referee) for a handball.
As thunder rolled around the stadium, Griezmann lined up the penalty, holding the ball under his arm. Croatia goalkeeper Subasic did his best to put the French striker off but he held his nerve to lash the spot-kick into the net.
Croatia was first out after half-time and again were into their stride quickly, with the brilliant Luka Modric pulling the strings in midfield as roars of “Croatia” echoed around the stadium.
But Manchester United’s Paul Pogba extended France’s lead within a quarter of an hour, stroking the ball home — sparking scenes of joy behind the goal from French fans, who knew their country had one hand on the trophy.
Kylian Mbappe appeared to make sure just minutes later. But Croatia was given renewed hope when Mandzukic made the most of a mistake by France goalkeeper Hugo Lloris.
France strongly fancied to win the final, started their tournament in France slowly, beating Australia and Peru by the odd goal before a goalless stalemate with Denmark saw them top the group.
But they moved up through the gears in the knockout stages, seeing off Lionel Messi’s Argentina in a seven-goal thriller before cruising to a 2-0 win against Uruguay and seeing off Belgium 1-0 in the semi-final.
For Croatia, the match in Moscow was perhaps one too far after they were taken to extra-time for three consecutive games.
Deschamps, who captained France when they lifted the World Cup in 1998, has become just the third man to win the trophy as both a player and a manager after Franz Beckenbauer and Mario Zagallo.
Croatia has brought joy to their Balkan nation of just four million people by defying the odds to progress to the final while reigning champions Germany, then Argentina and Brazil all fell by the wayside in Russia.
Football fever has slowly built over the past four weeks as France took its young national team to heart, with ecstatic scenes on the Champs-Elysees avenue after their semi-final victory.
Giant screens were erected in scores of fan zones across the country under exceptionally tight security, with the biggest gathering of all expected in Paris, where 90,000 will converge on a fanzone next to the Eiffel Tower.
Red-and-white chequerboard patterns were everywhere in Croatia, on cars, in shop windows, trams, buses as well as on jerseys worn by waiters, shop workers or TV presenters.