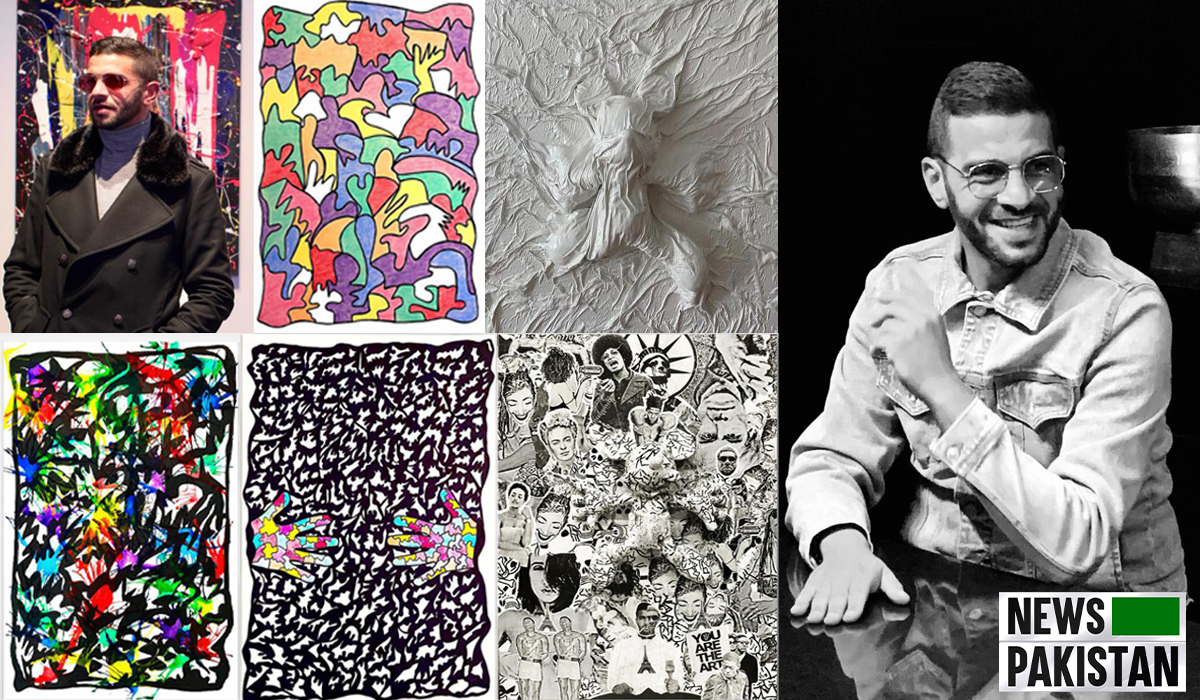 The contemporary artist Jaouad BENTAMA was born in Paris, between two doors, Saint-Ouen’s and Clignancourt’s, the son of Moroccan immigrants. Flea and public markets are his early playgrounds and he regularly finds himself working along his dad selling second-hand objects.

While everyone was into rapp, music and boxing, Jaouad Bentama was dreaming to be a visual artist. Remembering who he is and with a dose of confidence in his abilities, he made the decision that would change his life forever.

In 2012 , Jaouad decided to move to New-York City and to undertake formally his artistic life.

His work gracefully combines painting and found objects that consistently refer to the childhood.

His journey across the Atlantis represented the meeting between his need to create and a path now enabled by his life as an expatriate. This is why the question of borders, lines and identity are also at the heart of his artistic approach.

Jaouad considered his art as something which carries a profound message. His paintings are very therapeutic for a lot of people, he likes to send messages of hope for others to preside in their chosen career.

As he said “ Art therapy is a great rescue for people who find it very difficult to express their feeling verbally and not to be humiliated by people. We should all follow our dreams. Nightmares can be turned into wonderful dreams”.

When the british brand of football player, Umbro,  approached him about an art collaboration, he used it as a way to convey this message of hope.

He gave to the world more than a jersey but a “part of him-self”. He painted “the mosaic of life that embodies all human beings with their maps and uncertain borders, doubtlessly” echoes his own journey and its diverse anchors.

All the funds collected were donated to a french hospital to help sick children and give them some hope and happiness.

This artistic project had a strong impact in France where the most important specialized media relayed the information.

Perspectives and projects around the world

After a prestigious end of the year, Jaouad had to face a big challenge again. He had to survive a terrible accident that almost cost him his life.

His resilience is only strengthened and his determination increased tenfold.

Although he is still in crisis, he is preparing a beautiful exhibition in the country of his origins, in Morocco, scheduled for next June. An exhibition not to be missed, with unpublished works full of surprises! Stay tuned!

For him, only the sky and God can stop him, he is his own limit “the art and love you can spread is infinite. It’s an art journey”.

What is certain is that Jaouad Bentama has not finished making his art known.

He began his art journey by saying that he didn’t speak English but “I speak art” and he’s not going to stop anytime soon.

His actus are numerous, he intends to conquer the Asian continent soon, in addition to his collaborations that are being prepared in Europe and Morocco in 2022 and 2023.

He will continue to transcend conceptual and real boundaries with his art.

A path that will inspire many around the globe!