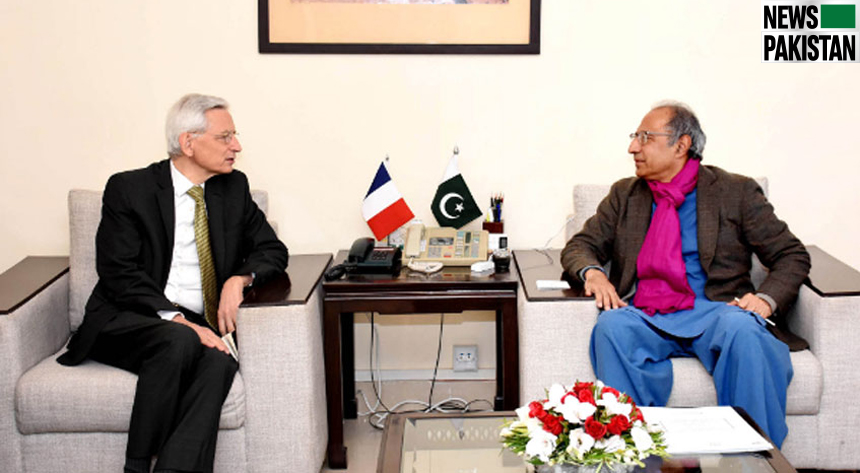 Ambassador Dr. Marc Barety said he was impressed with the good work done by the government in Pakistan to introduce institutional reforms and achieve stability and growth. H.E. Dr. Marc Barety said both France and Pakistan enjoyed excellent terms and hoped the relationship would further deepen in coming days through greater economic collaborations and business partnerships.

While talking to H. E. Dr Marc Baréty, Advisor Dr Abdul Hafeez Shaikh stated: “The government has worked very hard to pull the economy out of the ICU as it was in 2018, and the stage is now set for greater stabilization and enhanced domestic productivity that would help overcome inflation, boost businesses and create more employment opportunities.”

Advisor Dr Abdul Hafeez Shaikh claimed that measures had been taken to provide affordable food and medical treatment to the poor and the budget allocated for the social sector had been doubled. Hafeez Shaikh said the government was taking steps to tackle inflation and enhance domestic productivity through greater spending on social safety net, improving cash transfer program, ensuring greater ease of doing business and providing subsidized loans, electricity and gas to the exporters.

Dr Abdul Hafeez Shaikh said that the government was focusing on revitalizing the agriculture sector and several mega projects had been approved for improving irrigation management, watercourses and construction of water storage facilities at the farm level. These projects are also aimed at productivity enhancement of various crops, oilseeds enhancement, cage culture development, shrimp farming cluster development and water conservation in arid areas.

He said the government had doubled the social safety budget from Rs 100 billion to Rs 190 billion while it had also recently revamped its cash transfer program by replacing nearly 800,000 people with more deserving people. The government had also recently launched a special food package at a cost of Rs 7 billion to provide essential food items at reduced rates through the utility stores to the poor segment of population adversely affected by the food inflation.

On the macro front, he said the government had brought down the current account deficit from 20 billion dollars to 13 billion dollars and it would be further reduced to 8 billion dollars this year. Similarly, exports which had remained stagnant for almost five years had showing an upward trend.

Hafeez Shaikh said the revenue collection had jumped by 16 per cent and foreign direct investment had gone up by 280 per cent growth in the current financial year. Similarly, Pakistan’s exchange rate had begun to stabilize due to enhanced external flows while PSX had been declared by Bloomberg as the best performing market in the world.

KARACHI: Venue was Alliance Française (French Cultural Centre) where H.E. The Ambassador of France Dr. Marc Barety has inaugurated the Bureau of Campus France: a resource center to facilitate Pakistani students wishing to study in France.

“Ladies and gentlemen and people of the Press. It is always a great pleasure to be here in Karachi and especially the Alliance Française. I want to pay tribute, of course to the President (Bina Shah) and the Board of the Alliance Française as well as the team of administration and teachers that have been so active in, not only promoting French culture, but also French language here in Pakistan.

“We are going to add one (more) feather to the cap by adding the Campus France – that we’ve been talking about for many years. And I’m very happy that this is happening today here. So thank you all for giving us a hand in promoting this space of Campus France.

“It is important simply because one of the major assets we have in a relation between two countries (especially countries such as Pakistan and France) is the civil society, the population and the people-to-people relationship. This is absolutely necessary and this is really a guarantee that our relationship will go well.

“It’s also an investment into the future because by training young Pakistani students in the French language or sending them to France to study is also a very strong asset for the future. The population of Pakistan is massively young; more than 65% of the people are under the age of 25.

“It’s of course a challenge but also a great opportunity. Training Pakistanis in France will also be a great guarantee in furthering our relationship in Pakistan by many fields such as culture, language but also business and this is why we’re very keen on giving more Pakistanis the opportunity to go to France.”

Responding to a query by this scribe, H. E. Marc Barety stated:

“Basically the idea is that (we attract a lot of students from all over the world but not Pakistan and thus) we want to attract more people from here. Because we wish to have a diverse student body from all around the world. We think it’s important for all students to create connections and bonds.

“If I might add so. Doubling the number (of students) is a goal that fills well into the general strategy. But the issue is not only about doubling. It is also to make it more inclusive. In Pakistan we go through the HEC selection process. What we care about is gender and the region where the students are coming from.” 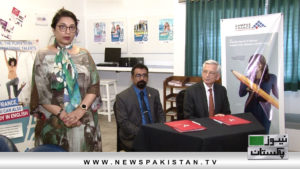 “We can truly call the Alliance Française a campus now. We have been refraining from doing so. Campus France Desk is a resource center the likes of which we have not seen before. It is for people that are interested in studying in France. Something that Pakistani students have been doing for decades.

“The educational relationship between Pakistan and France goes back many years. We have sent students for higher studies. Many students have achieved as high as PhD and post-doctorate level studies in France. With this step we hope to cement that relationship even more.

“We hope to be able to assist and help many students who want to study in France but have no idea how the process goes, perhaps the language barrier; perhaps the system that is different from ours might intimidate them.

“So I want to thank you all here for your support, for your interest in this very important project. This will benefit both our countries in the future for many years to come.” 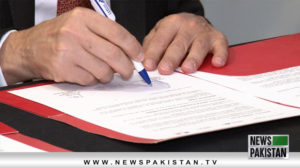 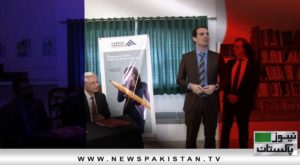 An introduction by Sebastian (from French Embassy in Islamabad): “Campus France is the national agency for promotion of higher education. Its office, inaugurated by the Ambassador at Alliance Française de Karachi , is the place where any Pakistani student in the Metropolis or from the world can come and get the information about the requirements for traveling to France: Such as, what will be the main problems when you reach there, what will be the opportunities, the visa process…There are a number of laptops that could be used by students in order to commence their research. Dedicated personnel will assist them with their research.” 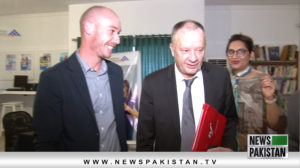 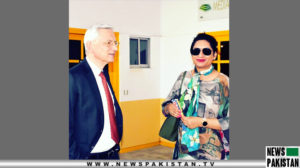 PS: Following the new national strategy of attractiveness «Bienvenue en France/Choose France», Campus France, an agency for the promotion of French higher education wishes to strengthen the position of France as a privileged destination of higher studies for high school students and international students. The goal set by the Prime Minister at the Rencontres Universitaires de la Francophonie in November 2018, is to attract 500,000 students from around the world by 2027, against 340,000 students today. This new campaign is supported by the Ministries of Europe and Foreign Affairs and Higher Education, Research and Innovation. It promotes an open, and enterprising France at the center of Europe, which attracts talents from all over the world to its various excellent courses and wants to make it known. “In an increasingly competitive world of higher education, France wants to maintain its status as a major host country and its aptitude to attract the best students in its institutions, whether they come from Africa, Asia or America”, Béatrice Khaiat, Managing Director of Campus France.