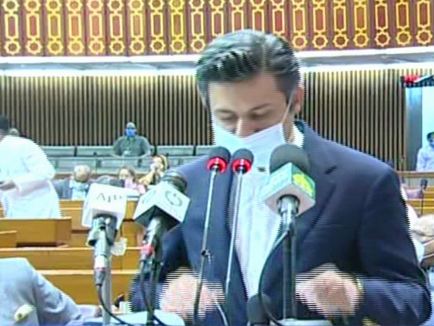 ISLAMABAD: Federal Minister for Finance, Revenue, Industries and Production Muhammad Hammad Azhar Tuesday stressed the need for further strengthening investment and business linkages with Saudi Arabia to its full potential and facilitating Pakistani diaspora abroad.
The minister was talking to Ambassador-Designate to the Kingdom of Saudi Arabia Lt. Gen. (Retd) Bilal Akbar who made a courtesy call on him here at the Finance Division, according to press statement issued by the Finance Ministry.
According to the statement, the minister welcomed the Ambassador–Designate and wished him success in his new assignment.
He said Pakistan and Saudi Arabia were enjoying historical relations over the years, adding that these bilateral ties were rooted in centuries old religious, cultural and commercial links between the people of both the countries.
He said People of Pakistan had great respect and reverence for the Kingdom being custodian of the two Holy Mosques. Moreover, a large number of Pakistani expatriates were working in different fields and have made significant contribution in building infrastructure.
Besides, Pakistani diaspora was a great asset for country who were serving as doctors, bankers, entrepreneurs, academia etc and remit valuable remittances back have home, he added.
He said the government had taken initiatives such as Roshan Digital Accounts to facilitate non-resident Pakistanis for making investment in Pakistan. A large number of Pakistanis, based in Saudi Arabia, have opened online accounts and benefited from the scheme, he added.
The Ambassador-Designate briefed the Finance Minister on the vast potential for expanding bilateral trade and investment between the two countries.