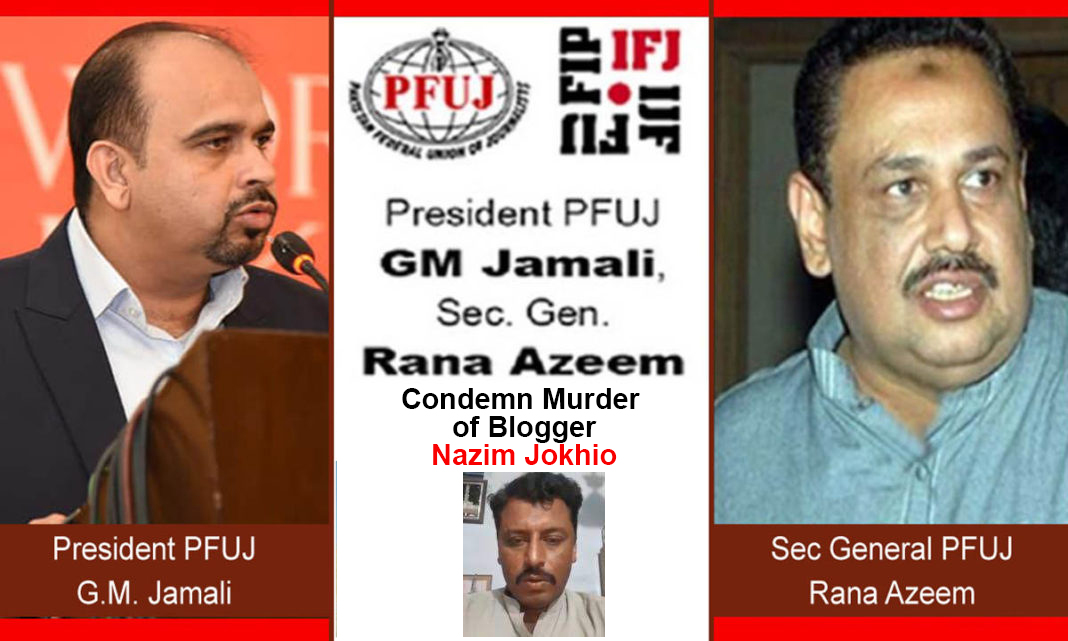 The Brussels-based International Federation of Journalists (IFJ – an associate member of UNESCO – that represents over 600,000 Media workers from 187 organisations in 146 countries) has also strongly condemned the murder of Nazim Jokhio and called on Pakistan authorities to investigate the crime swiftly and with due diligence. IFJ has demanded that the Pakistan government administer justice.

IFJ noted that Nazim Sajawal Jokhio was a blogger who had published a video of a foreigner poaching Houbara Bustard (an endangered species). On Tuesday (2nd of November, 2021) Nazim was abducted from his home and taken to the farmhouse of Sindh MPA Jam Awais Khan Jokhio. Next day Nazim’s tortured body was found at the property.

Nazim’s tortured corpse was discovered from Jam’s Malir farmhouse on Wednesday (3rd of Nov., 2021) at 2.30pm. Brother of the deceased Afzal Jokhio had accused Awais and Karim of murdering Nazim (who had in a video message – recorded before his murder – told that he had been tortured). IFJ too stated that prior to his murder, Nazim Sajawal Jokhio made a video statement alleging that he was attacked and threatened.

IFJ stated that Nazim Sajawal Jokhio published a video on social media of one of MPA Jam Awais Khan Jokhio’s foreign guests hunting the critically endangered migratory bird, the killing of which is banned under international nature conservation laws.

Deceased Nazim Sajawal Jokhio claimed to have received calls demanding that he delete the footage or face repercussions: “I am not afraid but this video statement of mine should be kept on record. I am receiving threats and I will not seek an apology,” he said in the video. Nazim Jokhio made a formal complaint with police following the incident.

He and two other suspects, Haider and Mir Ali, were booked under Section 302 and 34 of the Pakistan penal code.

KARACHI: PPP’s MPA Jam Awais Khan Jokhio has been remanded for 3 days by a local court on Friday (5th of Nov., 2021) after he surrendered to Police here. MPA Awais Khan is accused of torturing Nazim Sajawal Jokhio till death for filming the shooting of Houbara Bustard (hunting which is banned in Pakistan) by a foreign friend of MNA Jam Abdul Karim in the Malir’s Jam Goth.

Prime Minister Imran Khan taking  notice of the blogger’s murder, asked the Sindh Governor Imran Ismail to visit Nazim Jokhio’s residence in order to assure his family that the culprits would be nabbed and brought to justice. It is pertinent to mention here that the autopsy revealed that Nazim Jokhio, a father of four, was severely tortured. According to JPMC’s Dr Mohammed Areeb Nazim, who conducted the postmortem, beating was also delivered on the victim’s private parts. Jokhio’s head also showed internal bleeding: “The body bore torture marks inflicted by hard and blunt objects.”