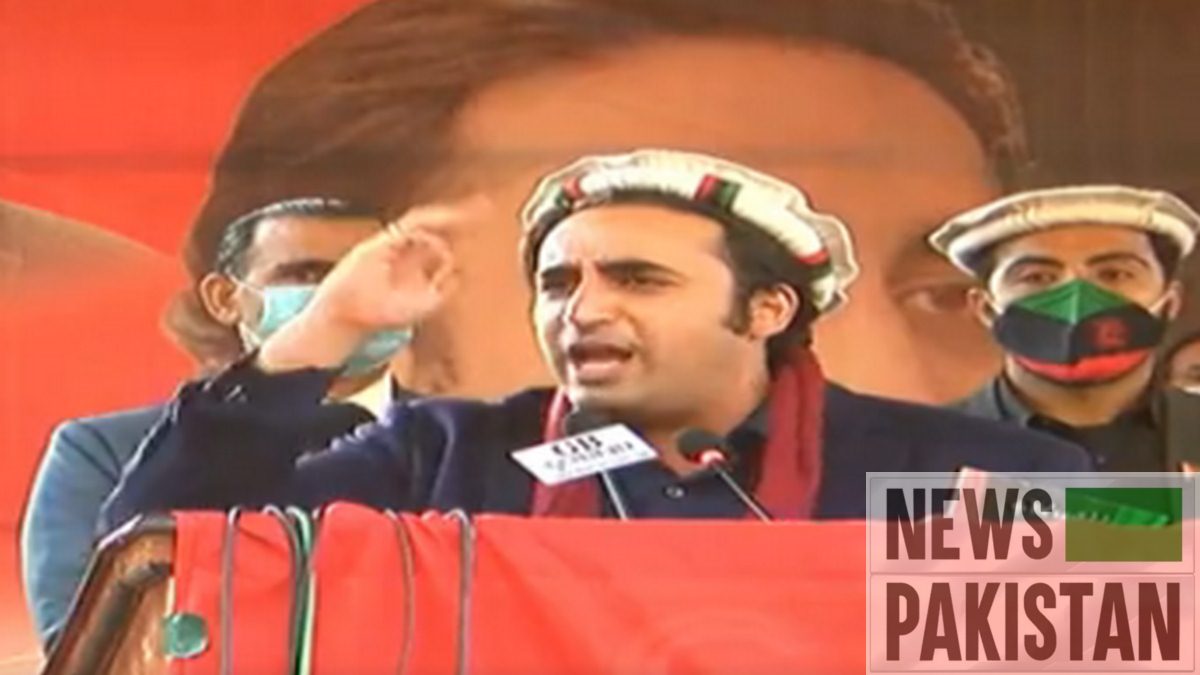 GHIZAR (GB): Chairman PPP Bilawal Bhutto Zardari, while addressing a corner meeting here today in connection to his party’s election campaign, accused Imran Khan of talking about accountability of only opposition while giving NRO to his sister Aleema Khan (who he said made huge properties in the US),  to Papa Johns (pointing towards CPEC authority’s Chief Lt Gen. retired Asim Saleem Bajwa who reportedly happens to own 99 companies, 133 pizza joints, and 13 commercial properties in the US including two shopping malls), sugar thieves (Sugar Baron Jahangir Khan Tarin etc), flour thieves, thieves who stole from BRT.

Chairman Bilawal Bhutto Zardari paid rich tributes to the brave people of GB for getting their independence from the Dogra Raj with their own struggle and then decided to integrate with Pakistan. He saluted this great struggle of the people of GB. He said that afterwards Shaheed Zulfikar Ali Bhutto liberated the people of GB from FCR.

Afterwards to liberate the people of GB from poverty and hunger, Shaheed Zulfikar Ali Bhutto gave subsidy on food items, petrol and clothes to people of GB to fulfill the slogan of “Roti, Kapra aur Makan”.

He gave the right to passport to every citizen and provided employment abroad so that people can earn for their families. Similarly Shaheed Mohtarma Benazir Bhutto, brought democracy to GB, provided jobs and introduced lady health workers program. President Zardari gave assembly, governor and chief minister to the people of GB.

He also started BISP so that poor women get relief. This selected thinks that by removing photograph of Shaheed Mohtarma Benazir Bhutto, the people will forget Shaheed Benazir Bhutto but this will never happen because her name is engraved in the hearts of the people. The last PPP government in GB provided 25 thousand jobs to the youth of GB.

Bilawal Bhutto Zardari said that the CPEC was brought to Pakistan by PPP government but now everyone wants to take credit for it. The CPEC was conceived by President Zardari so the backward areas of Pakistan like GB, FATA and Balochistan are developed and the fruit of CPEC is given to poor people of Pakistan.

Now 15 November is the day when you will vote for the PPP to get your rights to rule, right to own property, right to choose the Prime Minister and your right to have a separate province.

Chairman PPP said that someone has come to GB to befool people but they recognize this person who calls opposition hypocrite whereas he himself has all characteristics of a hypocrite. A hypocrite does not fulfill his promise, he lies consistently and he uses foul language and never keeps his words.

This person is selected and puppet Prime Minister Imran Khan. Imran Khan calls opposition of having similar narrative as the Indians whereas he himself was praying for the success of Narendra Modi in elections.

Imran Khan issued an ordinance for giving relief to Indian spy Kulbhushan Jadhav in the darkness of night to hide his action from the parliament and the people of Pakistan.

We want accountability which is across the board in which one law should be for everyone including judges and generals. Corruption has increased during the last 2 years of Imran Khan as selected and puppet prime minister.

Bilawal Bhutto Zardari said that this is the third generation of PPP which has come to GB and people know them very well. People know that the PPP always fulfill the promises to the people. PPP has to save the people of GB from the destruction of Imran Khan. On 15th November the people of GB will vote for the PPP candidates. He asked people to give him all three seats from Ghizar.

He asked the people to vote for PPP candidates, Pir Syed Jalal Shah, Dr. Ali Madad and Ayub Shah. He asked people to continue their hard work till 15th November so that PPP gets a heavy mandate. He said that he will stay in GB till the PPP government is formed in GB.

Eid-ul-Azha will be celebrated on Saturday 1st of Aug.