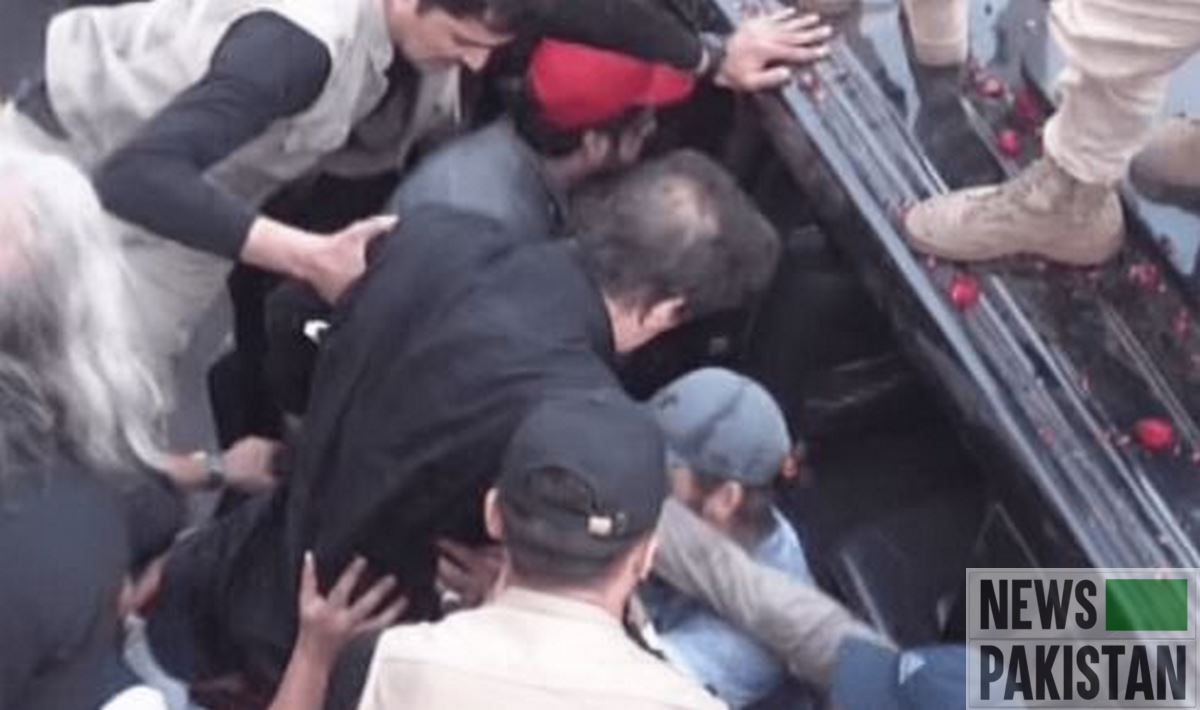 WAZIRABAD: Chairman PTI Imran Khan has been hit (in his right leg) by at least one bullet when a gunman (identified as Muhammad Naveed s/o Muhammad Bashir) fired a burst (by means of an automatic weapon) at his (20-feet-high) container when it reached the Allah Wala Chowk here.

Imran Khan has been taken to the Shaukat Khanum Hospital. CEO Dr. Sultan informed that following X-Ray it transpired that the bullet had not damaged Imran Khan’s bone and just pierced through the flesh.

The attacker, a short man, who was earlier nabbed and beaten up by the crowd, has been taken into custody by Police.

One person identified as a local worker of PTI Mohammad Moazzam has succumbed to injury.

Commenting on the condition of PTI’s Ahmed Chatta Hammad Azhar stated: “Ahmed Chattha is out of danger. He has 2 gunshot wounds, one in each thigh. The wounds are not deep and he is being operated upon to remove the bullets.

“Omer Meyer has one gun shot wound in his leg. He is stable. Our pti worker Rashid has an injured hand and he is also stable. Faisal Javed had a close call with the bullet scratching his cheek He is also stable.”

Body of the deceased and the wounded (including a child) have been transported to the nearby medical facility.

United Nations Secretary-General Antonio Guterres while condemning the firing at Imran Khan, called for a transparent investigation into the incident.

UN spokesman stated: “The Secretary-General is concerned about reports that former Prime Minister Imran Khan of Pakistan and several other people were wounded today during a rally.

“UN Secretary General condemns in the strongest terms any violence against politicians and their supporters.

“The Secretary-General wishes Mr. Khan and others injured a full recovery and calls for a full investigation into this violence nd for bringing to justice the perpetrators,”

“We very much hope that this (incident) will not create further challenges to the political situation in Pakistan,” the spokesman added.

Prime Minister Shehbaz Sharif took to the Twitter to condemn the assassination attempt: “I condemn the incident of firing on PTI Chairman Imran Khan in the strongest words. I have directed Interior Minister for an immediate report on the incident. I pray for the recovery and health of PTI chairman & other injured people.

“Federal government will extend all support necessary to Punjab govt for security & investigation. Violence should have no place in our country’s politics.”

He directed Interior Minister Rana Sanaullah and the Chief Secretary Punjab to present him the report ASAP.

Man identified as Ibtisham who grabbed the gunman.

PML-N Supremo Nawaz Sharif Tweeted: “I condemn the firing on Imran Khan and his associates and pray for the recovery of the injured.

“Sincere prayers for precious life lost and speedy recovery and well-being of Chairman PTI Imran Khan and all those injured in this unfortunate incident.”

Permanent members of UNSC told about anti-Pak propaganda by India