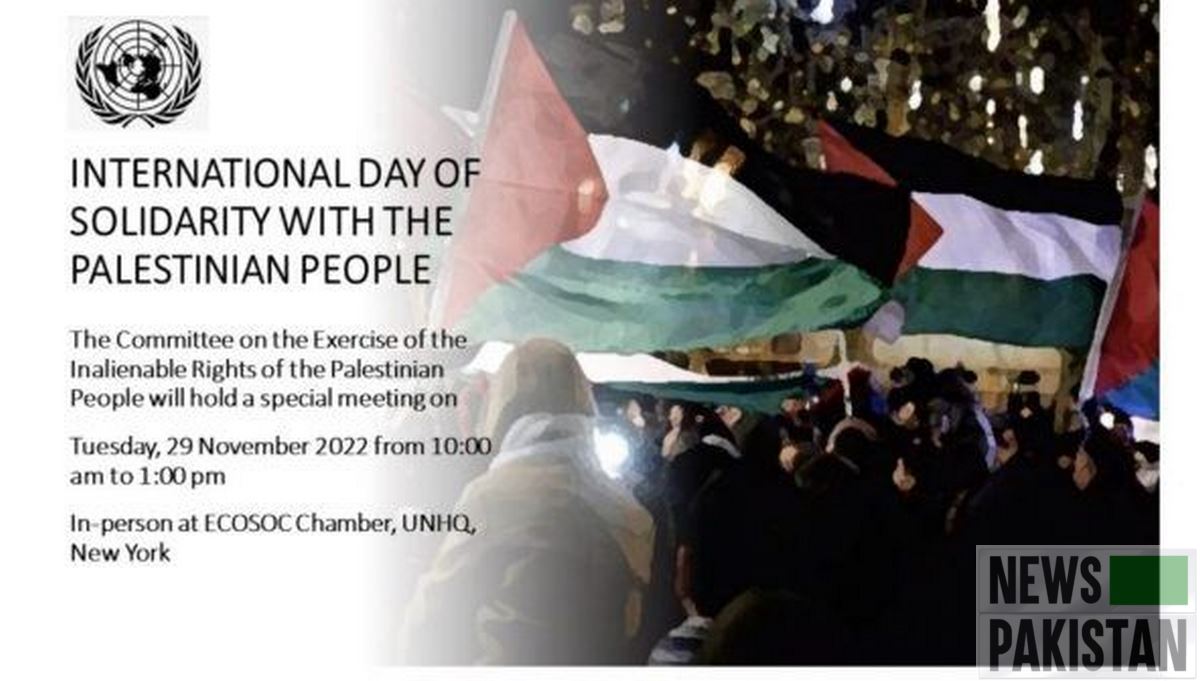 MANHATTAN: UN Secretary-General Antonio Guterres has reaffirmed the world body’s commitment to a two-state solution to the Israeli-Palestinian conflict, noting that this year the International Day of Solidarity with the Palestinian People was being observed “at a time of diminished hope for peace”

“I urge all parties to take immediate steps to reduce tensions and break this deadly cycle,” the UN Chief said in a message for the day which will be observed on Tuesday.

Meanwhile, the secretary-general pointed out that Gaza continues to endure debilitating closures and humanitarian crises, reiterating his call on the parties to engage to end the closures of the Strip and improve the living conditions of all Palestinians.

The United Nations Relief and Works Agency for Palestine Refugees in the Near East (UNRWA), he said, remains a vital lifeline for Palestine refugees, and called for continued funding for the agency, which cares for the Palestinian refugees.

The secretary-general added, “The United Nations’ position is clear: peace must advance – the occupation must end. We are steadfast in our commitment to realize the vision of two States – Israel and Palestine – living side by side in peace and security, with Jerusalem as the capital of both States.

“Together, let us reaffirm our support to the Palestinian people in their quest to achieve their inalienable rights and build a future of peace, justice, security and dignity for all.”

In his message the Prime Minister of Pakistan Shehbaz Sharif maintained that dire situation in Occupied Palestine posed a serious challenge to international peace and security, and the international community must enhance its efforts to bring an end to the endless violations of the rights of the Palestinians.

“To improve the prospects of a two-state solution, it is essential to stop Israel from expanding its illegal settlements in occupied Palestinian territories, including East Jerusalem,” the prime minister said in his message on International Day of Solidarity with the Palestinian People annually observed on 29th November.

On behalf of the people and Government of Pakistan, the prime minister expressed their unwavering support to the people of Palestine, especially on the International Day of Solidarity with the Palestinian People.

He said it was a matter of grave concern that the Palestinians had continued to suffer under illegal Israeli occupation for over seven decades.

The prime minister said that in addition to many injustices, the Palestinians endured in their daily lives at the hands of the occupying force, the brutal occupation has resulted in misery, frustration and hopelessness.

“The most recent example of the incessant Israeli violence was seen in August this year, when Israeli bombing in Gaza resulted in deaths of approximately 50 Palestinians, including 17 children, and injuries to more than 300,” he remarked.

He said Israel’s actions were emboldened by impunity. As long as the international community does not take any concrete action to bring an end to the atrocities, the Palestinians will continue to suffer deaths, injuries and egregious violations of their human rights, the prime minister commented.

The prime minister reiterated Pakistan’s consistent support for the two-state solution of the Palestinian issue, as enshrined in relevant Security Council and General Assembly resolutions.

“We reaffirm our solidarity with the people of Palestine and call for the establishment of a viable, independent and contiguous State of Palestine on the basis of internationally agreed parameters of the pre-1967 borders, with Al Quds al Sharif as its capital,” he added.

This year, the Special Meeting will be held in person on Tuesday, 29 November from 10 a.m. to 1 p.m. (New York time) and will be livestreamed on UN WebTV.

The International Day of Solidarity provides an opportunity for the international community to focus its attention on the fact that the question of Palestine remains unresolved and that the Palestinian people are yet to attain their inalienable rights as defined by the General Assembly, namely, the right to self-determination, the right to national independence and sovereignty and the right to return.

The Special Meeting will be presided by the Chair of the Committee, Ambassador Cheikh Niang, who will deliver opening statement, followed by remarks by the President of the General Assembly, the President of the Security Council, and by the Secretary-General, delivered by his Chef de Cabinet.

During the event, a video will be screened, which is part of a virtual exhibit titled “Portraits of Palestine,” to be launched online the same day and consisting of videos depicting individual Palestinians’ stories of resilience.

The Permanent Observer for the Organisation of Islamic Cooperation and the Chair of the Special Committee to Investigate Israeli Practices Affecting the Human Rights of the Palestinian People and Other Arabs of the Occupied Territories, as well as representatives of other intergovernmental organizations will deliver statements in the second part of the Meeting.