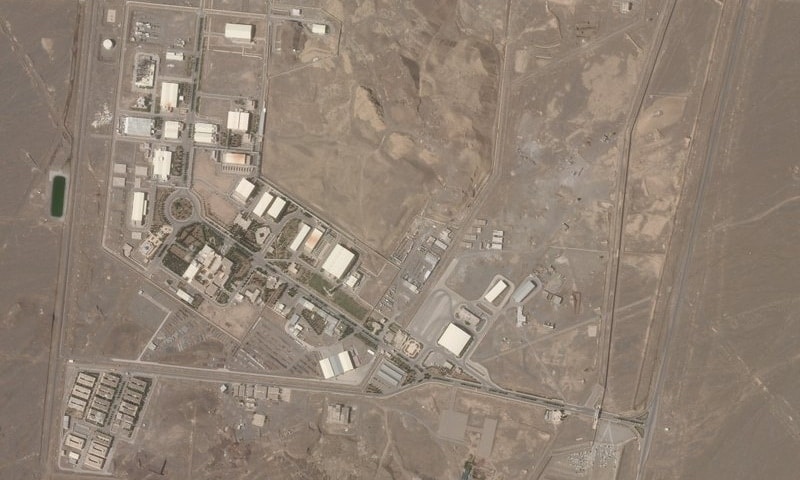 TEHRAN: Iran charged on Monday that its arch-enemy Israel was “of course” behind an attack on its main nuclear site, the Natanz uranium enrichment plant, and vowed “revenge… in due time”.
The Natanz site near Tehran was hit by a power outage on Sunday that Iran labelled “terrorism”. No one was injured and there was no radiation release, Iran said.
The latest of a string of incidents hitting Iran’s nuclear programme came days after talks resumed in Vienna to salvage the battered 2015 Iranian nuclear deal that former US president Donald Trump abandoned.
His successor Joe Biden wants to revive the agreement between Iran and a group of world powers, which places limits on the Islamic republic’s nuclear programme in return for relief from biting economic sanctions.
Israel strongly opposes the deal and has vowed to disrupt any efforts by the Islamic republic to build an atomic bomb — a goal Tehran has always strongly denied pursuing.
Tehran has blamed Israel’s Mossad spy service for previous attacks on its nuclear facilities and experts — including the killing last November of its top nuclear scientist, Mohsen Fakhrizadeh.
Iranian foreign ministry spokesman Saeed Khatibzadeh said Monday it was clear the latest incident too was an Israeli act of sabotage.
“Of course the Zionist regime, with this action, tried to take revenge on the people of Iran for their patience and wise attitude regarding the lifting of sanctions,” he told a press conference.
Khatibzadeh vowed that Iran’s response would be to take “revenge on the Zionist regime” when and where it chooses.
“If the purpose was to interrupt the path of lifting the oppressive sanctions against Iran, they will certainly not reach their goal.”
Iran’s Foreign Minister Mohammad Javad Zarif was quoted as saying Tehran would not allow the attack to affect the Vienna talks, to avoid “falling in the trap” set by Israel, state news agency IRNA reported.

“It’s not a policy we support,” says Apple CEO on Trump’s travel ban