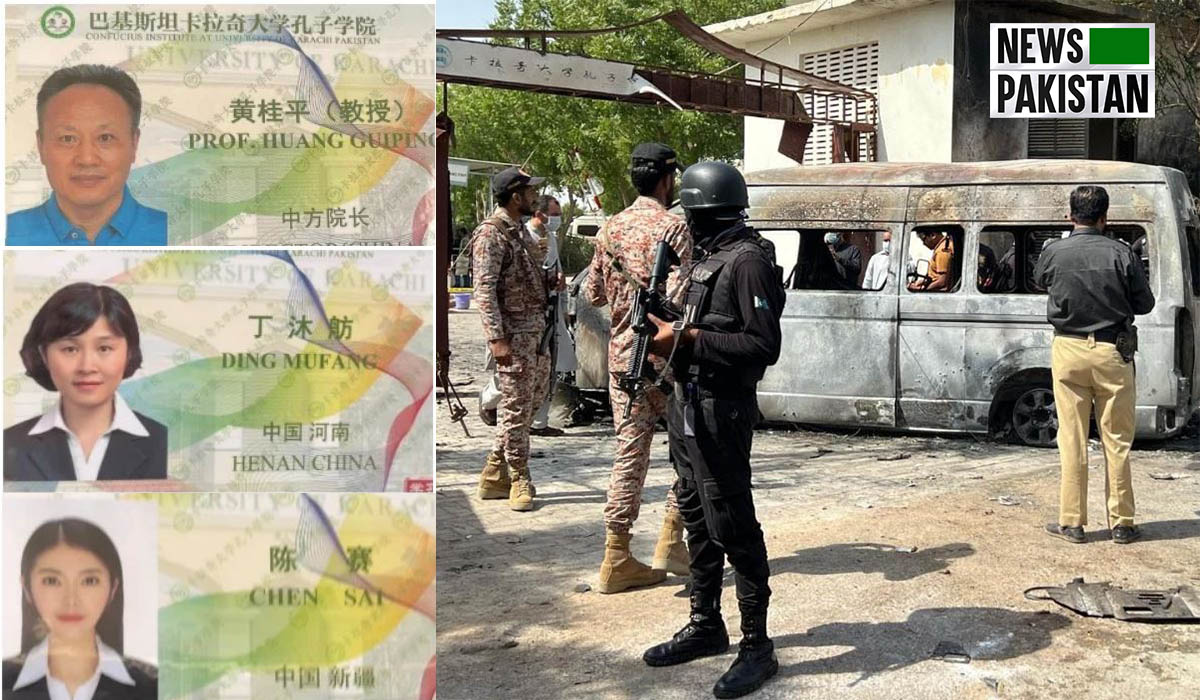 Sharjeel Memon revealed that the suicide bombing was jointly planned by the banned Balochistan Liberation Army (BLA) and the Balochistan Liberation Front (BLF) and a neighboring country had played a vital role. It is pertinent to mention here that the IGP Sindh had disclosed the arrest during a rendezvous held at CM House on 4th of July, 2022  with a Chinese delegation.

According to details the nabbed terrorist was a key commander of the banned Balochistan Liberation Army (BLA) who facilitated the KU suicide bomber. Minister further informed that the arrested terrorist had unveiled during  interrogation that he was the head of the sleeper cell of BLA in the Port City.

It may be recalled that the banned Balochistan Liberation Army (BLA) had claimed responsibility of the suicide blast near University of Karachi’s Confucius Institute that had claimed lives of two female, one male Chinese teachers and driver travelling inside the targeted Hiace van here on 26th of April, 2022,

Four wounded were immediately transported to various medical facilities. Bodies were taken to the mortuary operated by Chippa following autopsy at Jinnah Hospital. University of Karachi had observed one-day mourning on 27th of April, 2022.

According to details a woman (Shaira Baloch) wearing an abaya, who was waiting at the entrance, detonated the suicide jacket harboring some 4 kgs of explosives, as soon as the targeted van (that came out of the hostel) turned right, escorted by rangers personnel on motorbikes, to enter the Confucius Institute. The fact that LEAs found ball bearings at the site of the blast manifests that the attack was indeed a case of suicide bombing.

*On 14 December 2005, BLA militants launched six rockets at a paramilitary camp in Balochistan’s Kohlu district that then-President Pervez Musharraf was visiting. Though Musharraf’s life was never in any real danger, the Pakistani government labeled the attack an attempt on his life and initiated a sweeping army operation in Kohlu.

*On 14 June 2009, masked gunmen shot dead Anwar Baig, a school teacher in Kalat. Baig had opposed recitation of the Baloch anthem in schools. The killing was part of a larger campaign against educators who were seen to be sympathetic to the Pakistani state.

*On 30 July 2009, BLA militants kidnapped 19 Pakistani police in Sui, killed one and injured 16. Over the course of 3 weeks all but one of the kidnapped police were killed by their captors.

*On 14 August 2010, BLA militants killed 6 laborers and wounded 3 others while they were on their way home from work.

*On 21 November 2011, BLA terrorists attacked government security personnel who were guarding a private coal mine in the northern Musakhel district, killing 14 and wounding 10 more. The BLA claimed to have killed 40.

*On 31 December 2011, BLA claimed responsibility for the suicide bombing targeting a Baloch politician, Naseer Mengal, at his home in Quetta. The suicide attack killed 13 people and injured 30 others.

*On 26 May 2012, Baloch Liberation Army took responsibility for assassination of Muzaffar Hussain Jamali who was the principal of private school in Kharan. Jamali was travelling along with his family when the they were attacked. Jamali and his eight year old nephew died on spot, while his two daughters were injured in the attack.

*On 12 July 2012, Baloch Liberation Army took responsibility for abducting and killing 7 coal miners and 1 doctor. The miners were abducted in Soorang area on 7 July 2012. The miners were later killed and their bullet ridden bodies were found. All of the victims were Pashtuns. Pakhtunkhwa Milli Awami Party (PkMAP) and coal miner labour union staged protest outside Balochistan High Court (BHC).

*On 6 August 2013, Baloch Liberation Army took responsibility for abducting and killing 11 passengers from a bus near Machh Town. The militants were disguised as security personnel.

*On 16 August 2013, Baloch Liberation Army claimed responsibility for conducting an attack on Jaffar Express near Machh. The attack claimed lives of two people and wounded ten others.

(The Quaid-e-Azam Residency, a historical residence in Balochistan where Muhammad Ali Jinnah spent the last days of his life, was attacked by rockets on 15 June 2013. The building was nearly demolished as a result of the attack. Militants belonging to the Balochistan Liberation Army claimed responsibility. The militants also removed the flag of Pakistan from the monument site, replacing it with a BLA flag. The reconstruction work was completed and the rehabilitated Ziarat Residency opened on 14 August 2014 by then Prime Minister of Pakistan, Nawaz Sharif.)

*On 3 November 2014, Baloch Liberation Army (BLA) attacked United Baloch army (UBA). Commander Ali Sher of UBA was killed in the attack. Four other members of the UBA were also captured by BLA.

*On 30 June 2015, Baloch Liberation Army (BLA) clashed with United Baloch Army (UBA) in Dera Bugti. The attack resulted in death of 20 militants on both sides.

*10 laborers are killed by two gunmen on motorbikes in 2017 Gwadar labors shooting, Pakistani officials stated on 13 May 2017. BLA claimed the attack as a response to the China–Pakistan Economic Corridor. Victims of the attack were native of Sindh province.

*On 14 August 2017, BLA claimed responsibility for a roadside bomb blast that killed 8 FC troops in Harnai.

*On 23 November 2018, BLA claimed responsibility for an attack, killing four, on the Chinese Consulate in Karachi in a tweet that included a photo of three men identified as Azal Khan Baloch, Razik Baloch and Rais Baloch. All of them were killed by police during the attack. Later on, the mastermind of the attack, Aslam Baloch Achu, was also killed along with five other commanders in Kandahar, Afghanistan.

*On 11 May 2019, the BLA claimed responsibility for an attack on the Zaver Pearl-Continental Hotel in the port city of Gwadar.

*On 29 June 2020, 4 militants of the BLA attempted to attack and hold the Pakistan Stock Exchange attack in Karachi as hostage but were swiftly killed by security forces.

*On 15 October 2020, At least 14 security personnel were killed after a convoy of state-run Oil & Gas Development Company (OGDCL) was attacked on the coastal highway in Balochistan’s Ormara, Radio Pakistan reported.

*On 27 December 2020, Seven soldiers were killed in an attack on a Frontier Corps (FC) Balochistan post in Harnai district of Balochistan.

*On 7 March 2021, two Navy Personnel were killed in an attack, when they were on their way to Ganz from Jiwani, Balochistan.

*On 28 May 2021, BLA accepted the responsibility of targeting a water supply vehicle o Pakistan Army near a post at Nisau Dao Shah area of Kohlu with a landmine attack, which destroyed the vehicle completely & 4 personnel were killed.

*On 31 May 2021, 10 Frontier Corps soldiers were killed and 12 were injured in two attacks, one IED attack in Turbat and attack on a Checkpoint near Quetta. The attack was claimed by BLA.

*On 9 June 2021, BLA accepted responsibility for the attack on the Pakistani army camp in the Karakdan area of Bolan Pass, in which two personnel were killed and two others were critically wounded.

*On 14 June 2021, 4 Pakistani soldiers were killed in an IED attack.The attack happened at Marget Mines, about 75 kilometers (45 miles) east of Quetta, the capital of Balochistan.

*On 17 June 2021, Pakistan Army soldier was killed in a terrorist attack near Turbat airport, according to a statement from the Inter-Services Public Relations (ISPR).

*On 1 July 2021, The explosion took place near a moving Frontier Corps (FC) vehicle, At least six people were injured in a blast on Quetta’s Airport Road.

*On 15 July 2021, Two soldiers were killed in an IED blast during an operation against terrorists in Pasni, Balochistan. The two killed soldiers were identified as Captain named Affan Masood Khan and Sepoy Babar Zaman.

*On 20 August 2021, two children were killed and three were wounded in an attack targeting Chinese nationals in the port of Gwadar, Pakistan.

*On 26 September 2021, A statue of Pakistan’s founder Mohammad Ali Jinnah has been destroyed by the Baloch militants in a bomb attack in the coastal city of Gwadar. The statue, which was installed in June at Marine Drive – considered a safe zone – was blown up by explosives placed beneath the statue on Sunday morning, Dawn reported on Monday.

*On 11th October 2021, Shahid Zehri 35-year-old Pakistani journalist was killed in an attack claimed to have been carried out by the banned Balochistan Liberation Army (BLA) in the country’s restive Balochistan province.

*On 25-26 January, an attack on a security checkpost in Kech province led to the death of 10 Pakistani soldiers.

*On 2nd February 2022, 9 militants and 12 soldiers were killed at Panjgur and Nushki districts of Pakistan’s Balochistan province after forces responded to their attack. The Balochistan Liberation Army, claimed to have killed more than 100 soldiers at two military camps, claims rejected by Pakistan government.

*On 2 March, 2022, three people including a senior police officer in Quetta were killed after a roadside bomb explosion. BLA claimed responsibility of this incident. (Courtesy: Wikipedia).

Occupied Kashmir: 5th of August is being observed as Black Day!