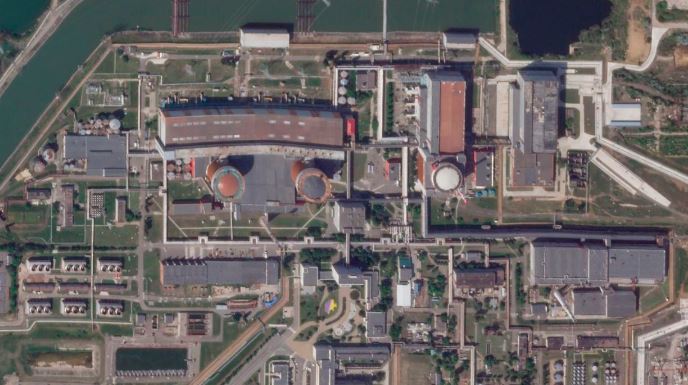 KYIV: Kyiv accused Russia on Monday of attacking Ukraine’s second-largest nuclear plant in the south of the war-scarred country, the latest burst of fighting around atomic facilities that has raised fears of a radiation emergency.

The Kremlin meanwhile dismissed outright claims that their forces had been responsible for mass killings in recently captured areas of east Ukraine and said Ukraine’s claims it had discovered mass graves were made up.

Ukraine’s nuclear energy agency, Energoatom, said the Russian army “carried out a missile attack” on the industrial site of the Pivdennoukrainsk nuclear power plant, with a “powerful explosion” just 300 meters (985 feet) from its reactors.

The strike damaged more than 100 windows of the power station’s building, but the reactors were operating normally, according to the agency, which published photos of glass shattered around blown-out frames.

It also released images of what it said was a two-meter-deep crater from where the missile landed.

“Fortunately, no one among the power plant’s staff was hurt,” Energoatom said.

Attacks around nuclear facilities in Ukraine have spurred calls from Ukraine and its Western allies to de-militarise areas around the facilities.

Europe’s largest atomic facility – the Zaporizhzhia nuclear plant in Russian-held territory in Ukraine – has become a hot spot for concerns after tit-for-tat claims of attacks there.

Early in Russia’s invasion in of Ukraine – launched in late February – there was fighting around Chernobyl in the the north, where an explosion in 1986 left swathes of the surrounding territory contaminated.

President Volodymyr blamed Russia for the attack in the southern Mykolaiv region on Monday, which he said resulted in a short power outage at the facility.

“Russia endangers the whole world. We have to stop it before it’s too late,” Zelensky said on Telegram.

The Zaporizhzhia plant was seized by Russian troops in March and shelling around the facility has spurred interventions from Western leaders. A monitoring team of the UN’s atomic agency deployed there in early September.

French President Emmanuel Macron this month urged Vladimir Putin to withdraw Russian heavy weapons from the region, while the Russian president cautioned against potential “catastrophic” consequences of fighting there.

The Mykolaiv region in southern Ukraine, where the Pivdennoukrainsk plant is located, is the near frontline of a Ukrainian counter-offensive in the south against Russian forces.

Kyiv’s forces have slowly but steadily been clawing back territory in the southern Kherson region, next to Mykolaiv, with the aim of capturing the strategically important hub, also called Kherson.

Ukraine’s progress has been faster in the north, where a lightning grab this month has seen Kyiv’s forces reconquer nearly the entire Kharkiv region.

Those gains have delt a serious blow to Moscow’s ambitions of capturing and holding Donbas, a industrial region of eastern Ukraine that has been partially controlled by Kremlin-backed rebels since 2014.

“It may seem to some of you that after a series of victories we have a certain lull,” Zelensky said in an address to the nation on Sunday evening.

“But this is not a lull. This is preparation … the whole Ukraine must be free,” he said.

Will Bilawal take oath as FM?