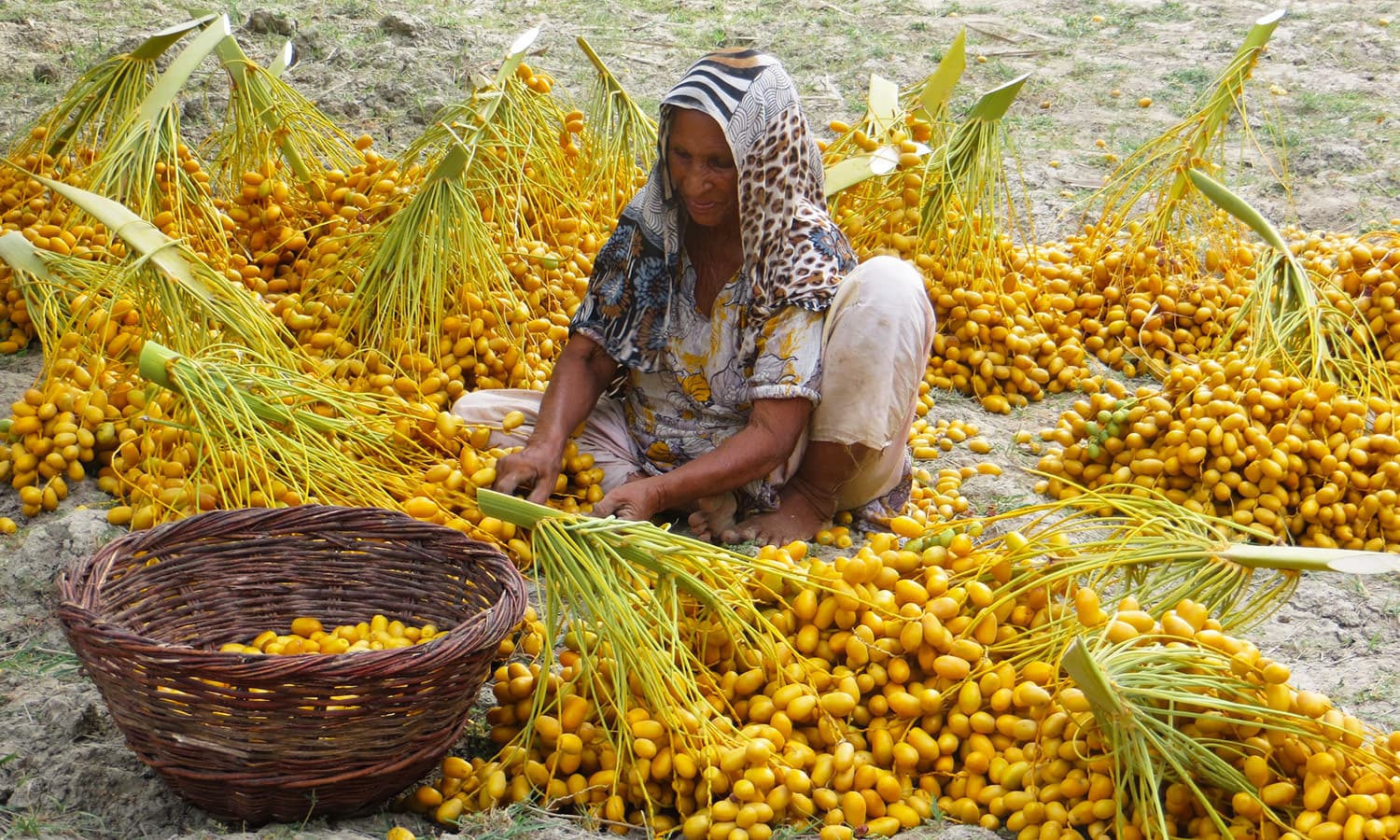 ISLAMABAD: Balochistan government has urged to take concrete steps to boost dates farming in the province as the sector facing decline in production due to lack of processing and other facilities.
The small farmers were facing losses due to unavailability of smart technologies amid halved crop yield due to lack of proper harvesting techniques, said Nazeer Baloch an agricultural expert based in Balochistan’s Date Farming district of Makran.
Mr Baloch suggested that the provincial government should install modern technologies in the area and establish easily accessible processing units to facilitate small farmers for increasing their production.
Baloch further elaborated that old harvesting techniques and non-availability of appropriate packaging of the commodity had remained the main reason behind less production.
The date farmers, he said in the season of dates harvesting was also facing labour shortage as old techniques of harvesting were labour intensive.
It was necessary for the authorities concerned to realize that the long neglected sector needed uplift and patronage of the government as dates farming and production was the main source of income for the local people, he maintained.
It merits mentioning here that the provincial government had established cold storages in Turbat and Panjgur Districts which were not enough to cater the needs of storage capacity as the entire set up was being built in a small capacity.
More dates processing plants should be established in the production areas to preserve the production, local farmer Nazeer Baloch said.
The government should launch a training programme to educate the farmers about modern techniques for better production and also conduct researches through collaboration of international agriculture based organizations, he added.
He said: “The government should take initiatives to encourage farmers for cultivating dates as the region has potential to produce 110 varieties of dates including Mozawti, Begum Jangi, Husaini, Halini, Dangi and others.”
“The Panjgur and Turbat areas of Makran division are producing 51 percent of the country’s dates in a year where the Date harvest is spreading over an area of about 42,300 hectares. It is also one of the main crops for 70 percent of the population of the area,” he said.
Nazeer Baloch said, in dates’ varieties, Mozawti was indigenous specie and most of its production had been carried out in Panjgur district and Begum Jangi is growing in 7Turbat area.
“Mozawti and Begum Jangi have best taste and quality whereas due to its lustrous appearance, rich nutritional benefits have high demand among national and international consumers,” he told.
To a question, he said the processing technology and set up required were a curing machine, drying, washing and vibrating chambers, elevator machine, reefer containers, grading tables, conveyor, packaging and pitting machines that took dates from the field to the market with proper presentation.
The implementation of such technology could help the local farmers to produce export quality fruit which was the much-desired demand of the farmers, he mentioned.
Due to lack of dates processing facilities in the area, there were limited profit margins for local farmers as they procure and sell at lower prices to the traders, who were mostly taking it to Iran for processing and packaging as the closest border region, he said.
“These dates are being processed in Iran and sold back to Pakistan and other international markets as ‘Made in Iran’ dates at a much higher price. The traders used to buy these good quality dates directly from the farmers at Rs 150 per kg. After the processing and packaging stages the same dates are being sold for Rs 1200 per kg,” Nazeer said.
He said the Balochistan government should take steps to enhance the export of dates to boost the regional economy and agro sector.
The government should ensure connectivity between the fields and the market and also establish fruits markets across the province to facilitate the local farmers, he added.
Balochistan has produced around 225,000 tonnes of dates in last season as the province has huge potential of delicious and unique export quality dates. With the addition of Dates production from Balochistan, the country has become the top Dates exporter to Japan in the year 2020.