KARACHI: Minister of State for Climate Change Zartaj Gul has said that the legislation for compliance to Minamata Convention on Mercury has been finalized as Pakistan was a signatory to this important convention and has ratified it recently.
Speaking at a seminar organized at the Karachi Chamber of Commerce & Industry (KCCI) in collaboration with the Ministry of Climate Change (MoCC) on Thursday to raise awareness about the hazards of mercury, she said that under the legal framework which would become effective from January 1, 2021, the government would not start any crackdown against industries but they would be compelled to strictly ensure limited mercury usage as per allowed limit of not more than 1 part per million (ppm).
President KCCI M. Shariq Vohra, Senior Vice President M. Saqib Goodluck, Vice President Shamsul Islam Khan, Joint Secretary MoCC Syed Mujtaba Hussain, Deputy Director Chemical Minamata Convention Dr Zaigham and others attended the seminar.
Minisiter Zartaj Gul informed that the results of recent testing showed that 56 out of 59 locally manufactured and imported creams, contained excessive amounts of mercury which was really worrisome as it threatens the lives of women and men also as many companies have nowadays introduced comparatively harder whitening creams for men as well. The ministry intends to take strict legal action against such companies hence such companies must refrain from using excessive amount of mercury in their products and keep it limited to 1 ppm only.
She criticized manufacturers for compromising female health for profit, alongside displaying discriminatory behaviour towards dark-skinned women, who are forced to rely on such products to increase their appeal in the society. She also showed her concern towards the use of mercury in other health areas like dental filling. “Dental filling by mercury to a pregnant woman can have direct impact on the fetus and ultimately can hamper the growth of her child. Unfortunately, many women don’t know the alternates available and they get this treatment even during their pregnancy,” she said while advising women to look for options other than mercury for their dental treatment.
She assured that the government was committed to encourage and promote industries making mercury free products in the country.
“Our aim is to control the excessive use of mercury in health sector and various other industries especially makers of whitening creams. There were many soaps which were also dangerous to skin and caused severe health conditions even cancers. We met CEOs of many manufacturers of skin whitening products and asked them to remove mercury from their products and some famous brands have not only assured compliance to our orders but have also changed the names of their products and brought a positive change in their advertisement campaigns through promoting positive image of women of all skin colours”, she added.
Earlier, President KCCI, in his welcome remarks, appreciated the MoCC’s efforts to raise awareness amongst the masses about the harmful impact of mercury which was desperately needed as majority of the population was totally unaware of the health hazards and was widely using many beauty products containing excessive mercury.
He also assured full support and cooperation to the Ministry of Climate Change in all its initiatives towards building a better and healthy society. 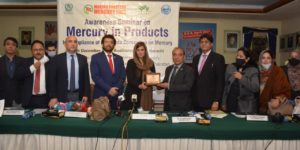