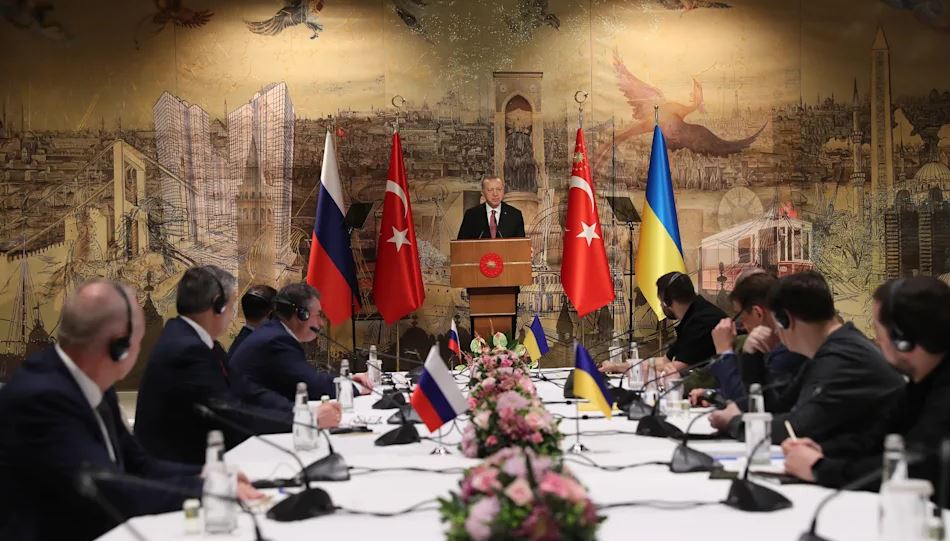 HONG KONG: Markets mostly rose Tuesday in Asia and Europe on optimism over talks between Ukraine and Russia aimed at ending their month-long war, while there was further support from another drop in oil prices.

While the conflict in eastern Europe continues to rage, traders have grown increasingly confident about shifting back into stocks as diplomats work to find a peaceful solution.

Analysts also said markets have been helped by the lack of any alternative investment for quality returns.

Focus is now on Istanbul, where officials from the warring parties began their first face-to-face talks since March 10, with Turkish President Recep Tayyip Erdogan urging them to “put an end to this tragedy”.

“The whole world is waiting for good news from you,” he added.

Vladimir Putin has called Moscow’s military goals “demilitarization and denazification of Ukraine”, as well as the imposition of neutral status on its ex-Soviet neighbor.

Neutrality and the future status of Donbas – which has been occupied by Russia – could be on the agenda, with Ukraine President Volodymyr Zelensky admitting “it is impossible to liberate all territory by force, that would mean World War III, I fully understand and realize that”.

But he stressed: “Ukraine’s sovereignty and territorial integrity are beyond doubt. Effective security guarantees for our state are mandatory.”

Hopes that a way out could be found were boosted last week when senior Russian general Sergei Rudskoi appeared to scale back Moscow’s campaign by saying the first phase of the war was over and the “main goal” was now on controlling Donbas.

London, Paris and Frankfurt were sharply higher in the morning, while US futures were also on the front foot.

“A lot of negative news is already reflected in market pricing and investor positioning, and we still see upside in US equities for the rest of 2022,” Solita Marcelli at UBS Global Wealth Management said.

And market strategist Louis Navellier added that “growth forecasts of both overall earnings and GDP remain positive for the next several quarters on the strength of the post-pandemic reopening”.

That has sent Treasury yields rocketing, fuelling fears of a sharp economic slowdown.

There has been some respite for inflation expectations thanks to a sharp drop in oil prices, which has come on the back of a Covid lockdown in Shanghai, China’s biggest city and financial hub of 25 million people.

The news sparked fears of a sharp drop-off in demand in the world’s number two economy, sending both main contracts down about seven percent Monday. They edged up slightly on Tuesday.

OANDA’s Jeffrey Halley said if there is a breakthrough in Ukraine talks “watch out for sub-$100 Brent, a mad rush into the euro and European equities, and a slump in the US dollar and gold.

“Asian equities should catch a nice tailwind as well.”

On currency markets, the yen rose against the dollar but remains under pressure and around six-year lows after the Bank of Japan said it will buy 10-year government bonds to keep yields from running above its target.

The move reinforced the divergence between the BoJ and Fed as US officials battle to rein in inflation.