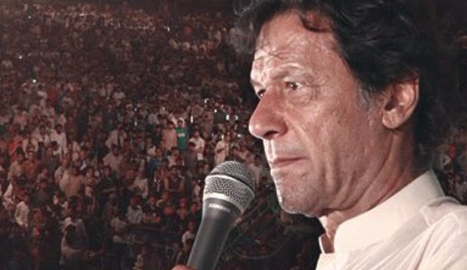 Talking to media persons here, he said, “The country’s internal and external enemies are behind the Mastung tragic incident.”

Imran Khan was in the Balochistan capital to condole with the family of Nawabzada Siraj Raisani, who along with around 130 people were killed during a suicide attack on an election meeting in Mastung district on Friday.

The PTI chief said Siraj Raisani was a patriot citizen and political leader of the country. He said non-implementation of the National Action Plan in its true spirit was the reason behind the terrorist incidents in the area.

“We, however, will not postpone the forthcoming election since that is what the anti-state elements want,” he added. Imran Khan also visited the Combined Military Hospital to inquire after the health of those, who were injured in the Mastung attack.

A relevant piece published earlier: Islamic State (IS) has claimed responsibility for the suicide bombing (carried out by means of 10kgs of explosives & ball bearings) during an election-campaign-related corner meeting of Nawabzada Siraj Raisani in Dareengarh area here today killing 111 and wounding 200 people.

This attack, carried out today (on 13th July),  is reckoned as the deadliest attack after Peshawar’s Army Public School carnage on 16th of December 2014.

Caretaker home minister of the province while confirming the death of Siraj Raisani told that Siraj died while being taken to a Quetta hospital. 150 people who got injured as the result of the explosion are being treated at District Headquarters Hospital.

The chief minister, in a statement, expressed grief over the martyrdom of Nawabzada Raisani and others and prayed for the early recovery of the injured. He said the nation and the state institutions would have to unitedly face the terror acts being carried out during the election campaign.

Those who were targeting innocent citizens were enemies of humanity, he added. Chief Minister Marri directed the authorities concerned to ensure the best possible treatment to the injured admitted to hospitals. He also instructed the provincial home department and other authorities concerned to ensure foolproof security of the candidates and public across the province.

Khyber Pakhtunkhwa Governor Iqbal Zafar Jhagra Friday strongly condemned bomb blast on the convoy of former federal minister Akram Khan Durrani in Bannu and Mastung blast in which Siraj Raisani embraced martyrdom among other martyrs. He expressed grief over the loss of precious lives in the two blasts and expressed solidarity with the bereaved families. He also prayed for the early recovery of the injured persons.

Meanwhile, interim provincial Minister for Information Khurram Shehzad, in a statement, also condemned the suicide attack and expressed over the martyrdom of Siraj Raisani and others. He prayed for the early recovery of the injured.

Pakistan Peoples Party leader Qamar Zaman Kaira Friday strongly condemned the Bannu blast and expressed grief and sorrow over the killing of innocent people in it. In his condolence message, he expressed sympathies with the bereaved families and prayed for early recovery of the injured.

Fertilizer to be made available on affordable prices. Asad Umar