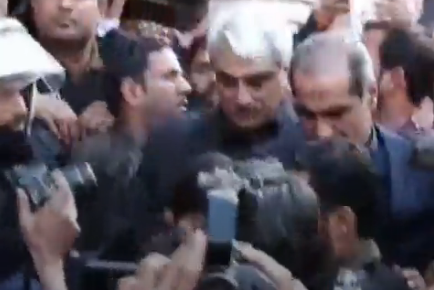 ISLAMABAD: Information Minister Chaudhry Fawad Hussain Tuesday said PTI govt.  had taken unprecedented measures for nabbing the plunderers of national wealth.
All the looted money would be brought back and the PTI government had set an example in the history of the country in that regard, he said in a private TV programme.
Expressing satisfaction over the exemplary steps of PTI government after coming to power, he said the government would not spare those who were involved in money laundering or corruption cases.
The present government was working under the leadership of Imran Khan, and had zero tolerance for corruption, he said.
Saad Rafique and Salman Rafique had been arrested, he said. Commenting on the arrest of political figures, he stated that the figure of 50 people was yet to be completed.
“I think, the politics of Asif Ali Zardari and Nawaz Sharif, had ended now, ” he said and added, both the leaders had a vast political career.
To a question he said whenever the PTI launch projects, the PPP or PML-N, could have an audit for these projects, adding that similarly, they should offer the same. The minister said that the political parties should choose the chairman of PAC who did not have any case in NAB.
To another question, he said that NAB was dealing the cases of Maryam Aurangzeb and others and that the institution was working independently. The government, he said had nothing to do with NAB affairs.
Fawad stated that the opposition’s status was just like ‘a dead horse’.  In response to another question, the federal information minister said PTI government did not register even a single case against the Opposition including PPP and PML-N. He added that all these cases had been registered during the previous governments.

Relevant: Special Assistant to Prime Minister on Media Affairs, Iftikhar Durrani Tuesday said the cases against PML-N leader Khawaja Saad Rafique and his brother were registered during the previous governments.
The National Accountability Bureau (NAB) arrested Saad Rafique and his brother Salman Rafique in connection with the Paragon Housing Society scam, he said talking to a private news channel.
He said NAB was an independent institution, which was investigating the cases against corrupt elements. The evidence was present at NAB against PML-N leaders in their cases, he added.
Iftikhar Durrani said the Pakistan Tehreek-e-Insaf (PTI) government was committed to eliminating the menace of corruption from the country. No corrupt element would escape from accountability, he stated.
To a question, he said newly appointed Special Assistant to Prime Minister on Media Affairs Yousaf Baig Mirza was an experienced and competent person. There was a good coordination in the PTI government’s media team, he said.