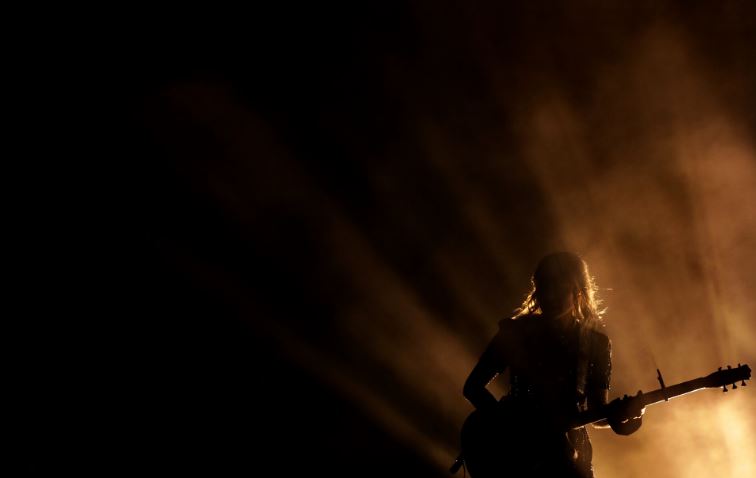 Indio, United States, April 18 (AFP/APP):Coachella is one of the world’s most-touted music festivals but it’s known just as much — if not more — for its viral moments and Instagrammable antics than for its actual music.
Here’s a rundown of some of the weekend’s highlights:

– Still the One –
Harry Styles made a splashy Coachella debut, playing a string of beloved hits, revealing new music, and inviting none other than Shania Twain, the widely adored country artist who ruled the 1990s, to sing along.

Performing for a sea of hormone-addled festival-goers in a chest-baring, multi-colored disco ball of a jumpsuit, Styles opened with his latest blockbuster hit “As It Was,” the first single off his forthcoming album “Harry’s House.”

“It’s big in here, innit?” the 28-year-old Brit quipped in his sexy-and-I-know-it yet sheepishly relatable air.

The former boy band idol then paid his dues to history by bringing out Twain, a pioneer of country-pop crossover whose seminal album “Come On Over” soundtracked the rides home of many a ’90s kid, including Harry’s.

“In the car with my mother as a child, this lady taught me to sing. She also told me that men are trash,” Styles said to Twain, who’s now 56.

The duo belted out Twain’s smash “Man! I Feel Like a Woman!” before sitting down for a soulful duet of “You’re Still The One.”

“I’m a bit starstruck… It’s a bit surreal to sing this song with you,” Twain, wearing a sequined mini dress and go-go boots, told Styles.
Judging by the crowd’s fervor, she wasn’t the only one.

Locks flowing and twerks popping even harder than her bars, Megan made good on her queen of hotties’ crown, getting suggestive with the mic and drawing screams with dance moves miming oral sex.

“Ladies if you love your body make some… noise,” she proclaimed.

Music’s seductive oddball Doja Cat meanwhile brought headbanging, flames and even the devil in the form of fellow rapper Rico Nasty to her set, putting on a pyrotechnics-heavy show with tantalizing dance moves and rock-heavy versions of even her glossiest hits.

And the Americans who didn’t yet know Brazil’s massive superstar Anitta certainly do now, after the artist – whose smash “Envolver” recently made streaming history – brought trilingual fire and eye-popping dance routines to the festival’s main stage.

Between her multiple outfit changes, medley of hits and ode to home with “A Girl From Rio” – which interpolates the world famous song “Girl From Ipanema” – Anitta still found time to bring Saweetie and Snoop Dogg onstage.

Fellow Brazilian Pabllo Vittar made history as the first drag queen to perform at one of music’s biggest parties, triggering delirium by putting on a dance party of her own for a packed crowd.

She then launched into a medley honoring the Latinos who paved the way, performing classics from Selena, Ricky Martin, Daddy Yankee, Celia Cruz and Shakira.

– A flex from Danny Elfman –
But while music’s hot girls ruled the weekend it was Danny Elfman who proved Coachella’s sleeper hit.

The 68-year-old best known for film scores delivered a stunning set that paired his 1980s art rock days with a full symphony that rendered some of pop culture’s most iconic soundtracks.

Elfman began his night by vowing “a strange little show” — an understatement if there ever was one.

The Emmy and Grammy-winning, Oscar-nominated sexagenarian seized his moment, launching full-throttle into more than half-a-dozen tracks from his surrealist new wave band Oingo Boingo, which he founded in 1979, including “Only a Lad,” “Insanity,” “Just Another Day” and “Dead Man’s Party.”

About halfway through he tore off his shirt and flung it aside, revealing that he is both heavily tatted – and swole.

Elfman broke up his avant-garde, guitar-heavy work by leading his orchestra through four decades of his legendary music for film and television, including an unhinged “Nightmare Before Christmas” medley featuring “This Is Halloween.”

He also performed songs from the film “Edward Scissorhands.”

Then, there was the Spider-Man main title, and the Batman theme.

And, of course, The Simpsons.

“Imagine peaking and you wander back to the stage and this happens,” read one tweet over a clip of the trippy Simpsons theme rendition, which featured vocal sound effects from the orchestra members and the classic saxophone solo.

“Who thought the Simpsons theme at Coachella was a joke??? Never underestimate Danny Elfman,” read another viral tweet.

Vidya Balan says she would love to work with Ranbir Kapoor