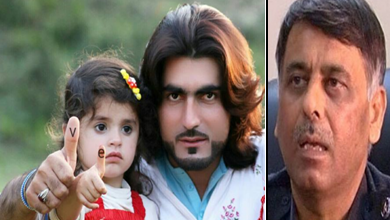 KARACHI: Police has arrested a crony of Rao Anwar – the cop accused of extra-judicial killing(s) – after murdered Naqeeb Ullah Mehsud’s father nominated Rao and his team members in FIR No. 40/2018 yesterday.

According to details Ahsan Abad Chowki Incharge, Hidayat Shar, who is reckoned as one of the close confidantes of Rao Anwar has been arrested today.

The nabbed Hidayat Shar has been taken to an undisclosed location for interrogation.

It is pertinent to mention here that Rao and his team have been booked u/s: 302 (premeditated murder), 365 (kidnapping or abducting with intent secretly and wrongfully to confine person), 344 (wrongful confinement for 10 or more days), 109 (abetment) and 34 (common intention) of the Pakistan Penal Code read with Section 7 of the Anti-Terrorism Act (ATA).

Rao Anwar who attempted to flee the country seems to have disappeared in thin air.

Notice pasted at the locked house of Rao Anwar, the cop suspected of extra-judicial murder(s)!