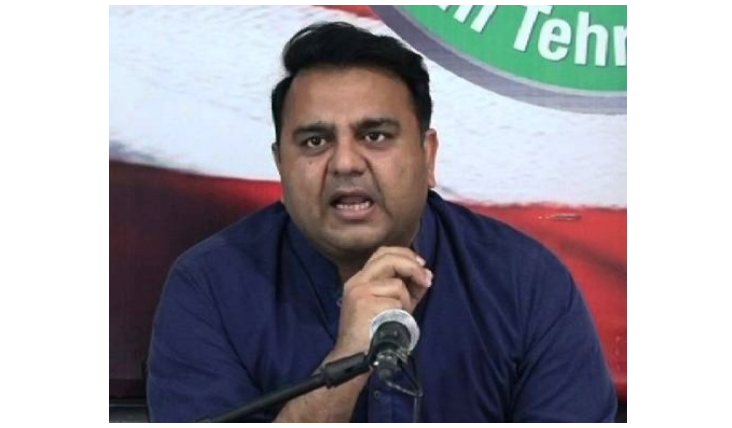 ISLAMABAD: Federal Minister for Information and Broadcasting, Chaudhry Fawad Hussain on Thursday said that former Prime Minister Muhammad Nawaz Sharif would go back to jail due to his cases being proceeded by National Accountability Bureau in a proper manner.

He said Nawaz Sharif had involved in transferring millions of rupee in a driver, cook and other security guard accounts besides transferring heavy amount to his daughter’s account.
Talking to a private news channel, Chaudhry Fawad Hussain said that the government had zero tolerance policy over corruption and the PTI was committed to addressing the issue without discrimination, he added.
He said political or non-political figures who are involved in corruption activities would face serious consequences of their wrongdoings. He added that such elements would have sentences according to their involvement in grafting.
About the role of Pakistan in the conflict between the Muslim nations, he said Pakistan would play a role as mediator to address the issue between Saudi Arabia and Yamen, under the dynamic leadership of Prime Minister Imran Khan.
Commenting on Saudi Arabia’s interest in China Pakistan Economic Corridor projects, he said that the brotherly country would invest in the infrastructure of this mega project of the region.
To a question, he said that the 18th Amendment was good for some sectors but not for all. The minister said that provincial governments could not streamline the affairs in the health sector, due to which, he added it had badly affected the common citizen of the area.
The Government has no plan to roll back the 18th Amendment but in special circumstances, we could take the political parties on board to resolve the problems of the people of the provinces.
He, however, said that the Higher Education Commission (HEC) was facing problems due to the amendment.
To a question, he said that Pakistan is the second largest country among the Islamic world which had strong forces to protect their people and boundaries.
Middle East countries were deeply observing the dynamic leadership of Imran Khan, and pinning the hope of his enlightened vision for the Muslim Ummah. They had hopes that Imran Khan as a leader of Pakistan could unite the Muslim counties as he had expressed the desire in his recent conference held in KSA.
Rejecting the allegation leveled by Opponents regarding the ‘financial deal’ of Saudi package for Pakistan, he said brotherly country Saudi Arabia had its own interest with this region.
Keeping in view the current situation being faced by common citizen, he said the government was fully aware of the problems of the masses and increasing the prices in petroleum products, electricity, he added would not affect the poor man. The government had increased the taxes on luxury items, he said.
He urged the provincial governments to take responsibility for controlling the price hike on commodities, which was affecting the common citizen. Pakistan had surplus wheat and provincial governments should take action against the profiteers across the country, he said.
Replying to a question, he said LNG agreement and prices would be reviewed.
Chaudhry Fawad said that government had no detail information about the corruption charges against former PTV Chairman Dr. Shahid Masood.

Share on Whatsapp:
Tags: Nawaz Sharif to face jail due to graft charges!