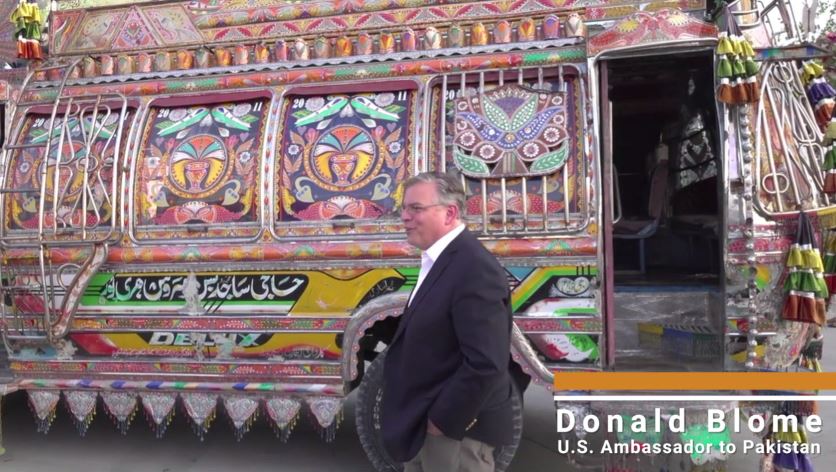 ISLAMABAD: Ambassador Donald Blome, who commenced his assignment at the United States Embassy here on Monday (23rd of May, 2022) in a message pointed out that Pak-US relationship started 75 years ago.

“We are proud of our long-standing partnership with Pakistan.  In fact, our relationship began 75 years ago, very shortly after Pakistan gained its independence.

“We live today in a world full of challenges.  We can address those challenges most effectively by working together, side by side.

“I look forward to deepening the connections between the Pakistani and American people, which have a rich history, and an even brighter future.

“I also look forward to exploring Pakistan, from Karachi to Lahore, Peshawar to Gilgit-Baltistan, and all the places in between.

“I hope I have the chance to meet some of you in the coming weeks and months.”

ISLAMABAD: “Today, I had my first encounter with Pakistan’s historic jingle trucks and learned about the art and the artists who have made this such a distinct and characteristic art form in Pakistan. This is riding in style.” stated Middle East expert Thomas Blome who has earlier been posted in Kabul, Jerusalem, Cairo, Baghdad and Kuwait.

Blome begins assignment as US Envoy to Pakistan

Ambassador Blome will lead the United States Mission in Pakistan in its ongoing efforts to deepen connections between the Pakistani and American people and work with the government of Pakistan towards a more stable, secure, and prosperous future for Pakistan.

Ambassador Blome brings a wealth of experience and expertise to this shared effort and to the US Mission in Pakistan.  On his arrival, Ambassador Blome said: “I am thrilled to be in Pakistan. I look forward to exploring this beautiful country and acquainting myself with its people and its culture.

“Most importantly, in this 75th year of US-Pakistan relations, I will continue to build on the strong relationship between our countries.”

Earlier, Secretary of State Wendy R. Sherman took to the Twitter to state: “Honored to swear in Ambassador Donald A. Blome  as the US Ambassador to Pakistan.

“Ambassador Blome is a stellar choice to build upon 75 years of U.S.-Pakistan relations, and we thank the Senate for his confirmation to this important post.”

Blome is the new US Envoy to Pk