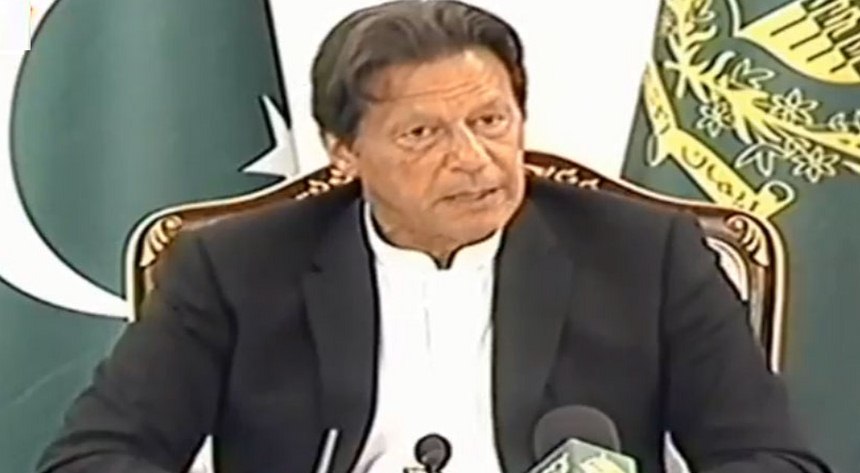 ISLAMABAD: Prime Minister of Pakistan Imran Khan, while addressing the nation here today, has stated that due to abject poverty strategy of lockdown will not succeed here to contain Coronavirus.

Comparing economic state of affairs here and in USA he pointed out that the Corona Relief Package announced by Pakistan was worth US $ 8 billion whereas, Trump had announced a US$2000 billion relief package.

PM also cited the example of India that had locked the country of more than a billion people down for weeks. Later, he said, the Prime Minister of India had to apologize the nation for taking this measure.

He said that 25 percent of the Pakistan’s populace was living below the poverty level and one could not force them to stay inside their single-room houses indefinitely sans food. He noted that youth and Iman (faith) were two strengths of Pakistani populace.

He announced the formation of Corona Relief Tiger Force consisting of youngsters (students, drivers, doctors, engineers etc.) that will help Army and the local administration to provide provisions in the locked down areas.

Tiger Force will also educate people about self-isolation and other aspects of the malady, for instance one does not need to go to hospice just because of cold and flue.

PM also announced creation of a Corona Relief Fund and asked prosperous people in as well as out of Pakistan to donate money. He said that such donors will get relaxation in taxes and the audit of the donated money will be transparent.

Imran Khan further informed that those industrialists who do not show their workers the door will be given cheaper loans by the State Bank of Pakistan.

He said that Ahsaas program will be extended and those who want to help others will be informed where the relief was needed. PM warned the hoarders that state will react very strictly against them. He said that people of Pakistan as a united force will defeat the menace of COVID-19.

Sindh: From 6th Sept all pupils of class IX to XII will be vaccinated