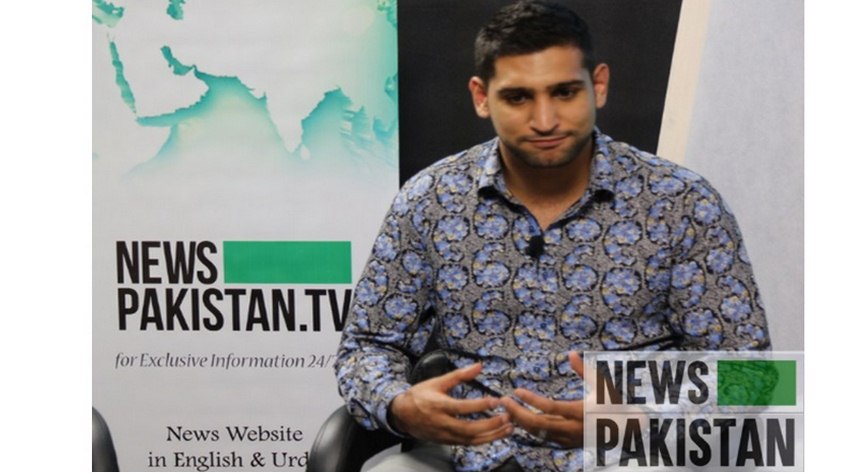 The weight-ins of the boxers for the First-ever Boxing Show announced here by the Newspakistan.tv Brand Ambassador  Amir Khan on Friday.
The Boxing Show is scheduled to be held here today at the Amir Khan Boxing Academy, Pakistan sports Complex. Apart from boxers, coaches, promoters and boxer Aamir Khan were present on the occasion.
The event was being conducted on the guidelines of Federal Minister for Inter Provincial Coordination Dr. Fehmida Mirza, Promotion Boxing Event where world renowned boxers from Afghanistan, Indonesia, Philippines, Poland, and hosts Pakistan were featuring in the extravaganza to be broadcast live on PTV Sports.
Speaking on the occasion, Aamir said he had promised the nation that international standard boxing events would be held in the country.
“This journey is going to begin on Saturday (October 3) and it will be the first mega event of professional boxing in the history of Pakistan,” he said and added that he would continue holding such events in the country but also requested for the government’s patronage in this regard. Aamir said Asian boy Usman Wazir was fully prepared to enter the ring and would be victorious in his fight.
On the occasion, Usman said he was very grateful to Aamir Khan for not only promoting boxing in the country but also uplifting the talent at world-class competitions.
“This is my first professional fight in the country and I’m very excited in this regard and I will dedicate my victory to my country,” he said.
The main event bout would take place between Usman and Indonesian Boida in the superlight division. In the co-main events, Pakistan’s Asif Hazara would fight against Afghanistan’s Ramin Nejrabi in the superfly weight category, while Pakistan’s Nadir Baloch will face challenge from another Afghan pugilist Mohammad Salim in the featherweight category.
In under card fights, Pakistan’s Kamran Wahab would take on compatriot Muhammad Zaman in the lightweight category, while Bilal Mehsud will try his luck against Afghanistan’s Amin ul Haq in the super-lightweight category. Pakistan’s Allah Baksh will fight against Polish boxer Artur Krzysztof in the heavyweight category.
Similarly, the super featherweight bout would be held between Pakistan’s Sikander Abbasi and Afghanistan’s Jawad Hassan. In the lightweight category, Pakistan’s Zahoor Abbas would fight against compatriot Moin Khan, while ‘Pakhtoon Boy’ Adil Said will take on compatriot Abbas Ali in the middleweight category.

No investigation started yet regarding failure of RTS: Ali Zafar