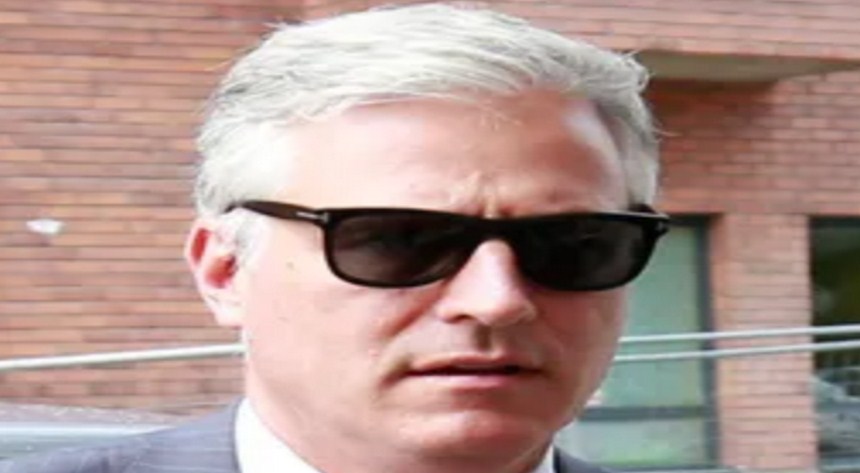 WASHINGTON: During a meeting with FM Shah Mahmood Qureshi here today, US National Security Adviser (US NSA) Robert O’ Brien has appreciated Pakistan’s efforts for maintaining peace in the Middle East/South Asia and endeavoring to achieve a peaceful political settlement in Afghanistan.

Pak FM informed him about the concern of Pakistan apropos instability in the Middle East pointing out that would affect the region and the global economy. FM stating that Pakistan was ready to play its role for peace in the region stressed the need for de-escalation and dialogue.

Focusing on Kashmir, FM said the US should urge India to end its lockdown in the occupied territory, observe ceasefire along the LoC, implement UNSC resolutions and let Kashmiris exercise their right to self-determination.

FM stated that millions of Kashmiris had been besieged by means of curfew. He pointed towards ban imposed on Media by the GoI. He held that resolution of Kashmir dispute in accordance to the UN resolutions was necessary for peace in SA. He also stated Pakistan would continue its endeavors for political solution to Afghan conflict.

Foreign Minister Qureshi held that Pakistan had always valued its partnership with the US. He also briefed members of Caucus on the latest situation in Indian Occupied Jammu and Kashmir and continuing Indian repression of the Kashmiri people.

Shah Mehmood Qureshi informed the Caucus about government of Pakistan’s vision for socio-economic progress and human development in the country as well as Pakistan’s efforts for regional peace and prosperity including facilitating peace in Afghanistan and defeating terrorism in the region.

Members of Pakistan Caucus lauded Pakistan’s invaluable contributions for peace and security in the region. 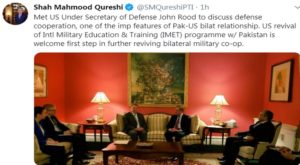 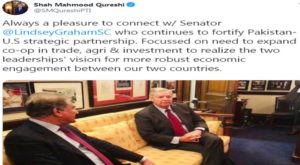 FM Tweeted: “Discussed our bilat. relationship, Pakistan’s contribution to the Afghan Peace Process, recent ME tensions & India’s illegal lockdown in Occupied J&K with its implications for regional security until peaceful resolution in line with the Kashmiris’ right to self determination.” 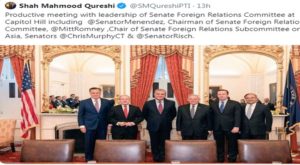 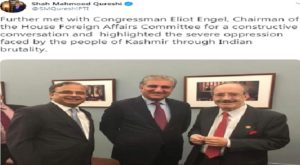 “Further met with Congressman Eliot Engel, Chairman of the House Foreign Affairs Committee for a constructive conversation and highlighted the severe oppression faced by the people of Kashmir through Indian brutality.” 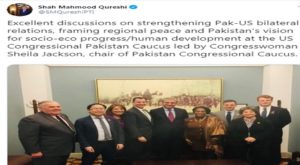