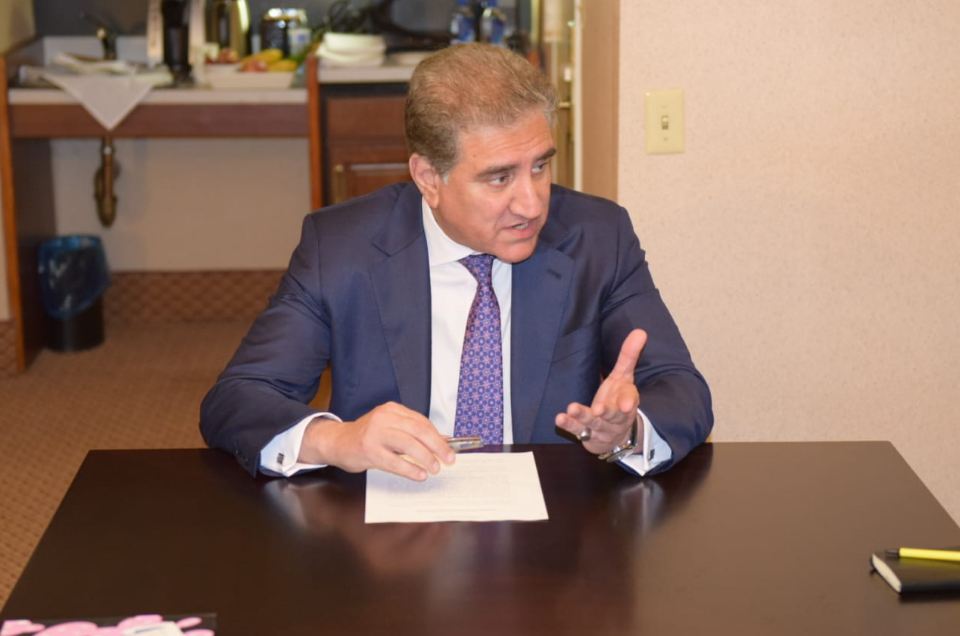 ISLAMABAD: Foreign Minister Shah Mahmood Qureshi has warned that India could carry out any misadventure including false flag operation against Pakistan.

He claimed that the Prime Minister and Foreign Office had become the voice of Kashmiris. The Foreign Minister said Tom Lantos Human Rights Commission held a hearing yesterday on occupied Kashmir.

ISLAMABAD: Taking to the Twitter PM Imran Khan has cautioned that crossing the LoC by AJK protesters would give India an excuse to increase violent oppression of Kashmiris in IOJK and attack across LoC. 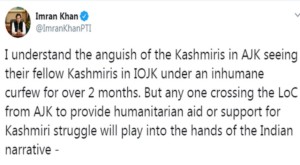 “I understand the anguish of the Kashmiris in AJK seeing their fellow Kashmiris in IOJK under an inhumane curfew for over 2 months. But any one crossing the LoC from AJK to provide humanitarian aid or support for Kashmiri struggle will play into the hands of the Indian narrative –

“A narrative that tries to divert from the indigenous Kashmiris’ struggle against brutal Indian Occupation by trying to label it as “Islamic Terrorism” being driven by Pakistan. It will give India an excuse to increase violent oppression of Kashmiris in IOJK & attack across LoC,” Imran Khan cautioned.

It is pertinent to mention here that on JKLF’s appeal a day before, an enormous number of populace from AJK had set out in rallies to Muzaffarabad in order to manifest camaraderie with the citoyens of IOJK.

The JKLF leadership asking the concerned administration not to create obstacles for them, has proclaimed that after converging at Chakothi sector the crowd would cross the LoC and move towards Srinagar. However, the Muzaffarabad management appealed them not to get too close to the LoC for their own safety.

Sources privy to NPTV have insinuated that the trigger-happy Indian Army  – that off and on resort to indiscriminate firing at civilian population from their side of the border – would gladly catch at the opportunity and resort to firing and shelling at the crowd assembling there, causing fatalities.

According to NPTV correspondent in AJK, a great number of people are presently moving towards Chakothi sector using various modes of transportation including bikes and pickups.

If they do not pay heed to the warning of Prime Minister Imran Khan and attempt to cross the Line of Control then either a clash is foreseeable between the marchers and the local administration  (that is all set to stop them ten kilometers before LoC)  or a debacle could happen if Indian forces open fire.