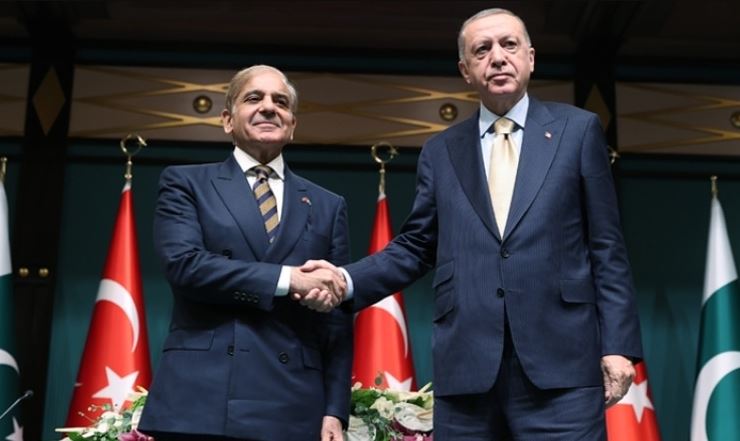 ISLAMABAD: Prime Minister Shehbaz Sharif said that in wake of the common challenges and emerging threats facing both countries, Pakistan and Turkiye should work together through collective research and pooling of resources.

“We believe that Pakistan and Turkiye should work together and deepen their partnership through collective research and joint development and pooling of resources.”

Prime Minister Shehbaz told Turkish Anadolu Agency in an exclusive interview, published on Sunday (27th of November, 2022), during his two-day visit to the country from 25-26 November to jointly inaugurate the third of four MILGEM corvette ships manufactured by Turkiye for the Pakistani Navy.

He said the “exemplary,” Pak-Turkiye relations were “grounded firmly in common religious, cultural, and linguistic links and transcend political changes on either side.”

Over the past seven and a half decades, the prime minister said, the two sides have always “stood by each other in the face of all changes.”

“Pakistan and Turkiye support each other on all issues of core national interests — whether it is Jammu and Kashmir or Northern Cyprus.

“I would like to take this opportunity to thank Turkiye, particularly its leadership, for its principled support on Jammu and Kashmir dispute,” he said.

“Confronted by common challenges and new and emerging threats, Pakistan and Turkiye have deepened their cooperation across various spheres, particularly in defense,” Shehbaz Sharif said.

He lauded the Turkish defense industry which has “achieved spectacular success under the leadership of President Erdogan, defying all odds and challenges in the past two decades.”

He added that their collaboration on the construction of the MILGEM-class warships, not only has a “unique value” for the Pakistani Navy’s capability enhancements but also “prominently stands out as a defining moment to further cement the bonds of friendship between our two nations and our two navies.”

To a question, the prime minister said Pakistan’s economy “was facing multiple global and domestic challenges” and was “on the verge of financial collapse” when he assumed charge.

“The economic policies of the previous government were not pro-growth and led the economy to multiple challenges,” he said.

However, the prime minister said his government had adopted a “mix of policies to tackle the economic downturn by accepting the fact that we have a very short time to step back from the edge of bankruptcy and financial collapse.”

“No doubt, some of our policy options, like the withdrawal of untargeted subsidies, had added to the cost to the economy in the short term. But, most of our policies are more likely to offer benefits in the longer term,” he remarked.

“We are also aware of the fact that our current course of action is hurting the most vulnerable and marginalized in society but we are taking care of them by announcing targeted subsidies and other relief measures,” the prime minister said.

He said the revival of the IMF programme and “active engagement with bilateral and multilateral partners” had eased the pressure.

To tackle the economy, he noted that his government took measures to reduce the import bill, current account deficit, and pressure on the Pakistani rupee.

The prime minister said the massive floods that hit Pakistan early this year “caused a great deal of suffering.” The recently announced packages by the government for farmers and businessmen will help stimulate economic activities, he added.

Coming to the issue of climate change, Prime Minister Shehbaz said, while Pakistan contributed less than 1% of the global carbon footprint, it “is facing the brunt of natural calamities in the form of heat waves, glacial outbursts, droughts, torrential rains, and unprecedented monsoons.”

“There is an urgent need for the industrialized countries to meet their climate finance commitments, with a balanced focus on adaptation and mitigation,” he said, welcoming a deal to establish a “loss and damage fund” to compensate developing countries most severely impacted by climate change.

He also suggested that the international community explore the possibilities of “debt swaps for climate action, particularly adaptation.”

About his government’s efforts to respond to the flood situation, the prime minister said the country “mounted coordinated rescue and relief operations mobilizing all possible resources and capacities.”

A dedicated National Flood Response and Coordination Centre (NFRCC) has been set up to effectively coordinate rescue and relief operations, he noted.

While discussing his government’s foreign policy, he said Pakistan’s “longstanding and broad-based relationship” with the US was “committed to deepen and widen.”

“In recent months, engagement between both countries has been quite productive and substantial. Our interactions at various levels have intensified, which manifests in that the relationship is strengthening.”

Recalling a recent interaction with US President Joe Biden in New York, he said there had been “several high-level visits including congressional delegations and by members of the (US) administration.”

“These interactions have yielded positive results and further solidified our ties,” he said, thanking Washington for its $97 million of support for Pakistani flood victims.

The two countries, celebrating 75 years since the establishment of diplomatic ties, are “charting out a promising course for the decades ahead,” said Sharif.

He called the US an “important trading partner” and added that the two countries were “exploring more ways to strengthen bilateral trade and commercial ties.”

“Some of the US companies are doing quite well in Pakistan. We encourage major US companies to invest in Pakistan’s lucrative market and enhance commercial ties, particularly in our growing IT sector,” he said, encouraging more student exchanges between the two countries.

Commending the “strong Pakistani diaspora” in the US, Sharif said they were “acting as a bridge to deepen the ties between our two countries and the people.”

Pakistan is also cooperating closely with the US “to promote peace and stability in Afghanistan,” while also pursuing a foreign policy of “friendliness and goodwill towards all countries,” he said.

“While the Pakistan-China relationship is very special, Pakistan and the US have also maintained a longstanding historic bilateral relationship, which is broad-based in nature and covers all issues of mutual interest.

Shehbaz Sharif said Pakistan “strongly believes that inter-state relations should be based on mutual respect and peaceful resolution of issues by upholding of principles of UN charter and international law.”

On relations with China, he said his recent meetings with the Chinese leadership “injected new impetus in our joint efforts to ensure timely progress and implementation of major projects.”

“Important understandings were reached on advancing flagship projects such as the Main Line I and Karachi Circular Railway (ML-I/KCR) projects, as well as on the early implementation of the Framework Agreement on Industrial Cooperation.

“We also agreed to step up cooperation in green energy, science and technology, and agriculture, which are all important building blocks of CPEC’s (China-Pakistan Economic Corridor) high-quality development,” he said.

“Both Pakistan and China are mindful of the complex regional environment and the risks it poses. We will continue to exercise heightened vigilance and ensure that our detractors’ nefarious designs will fail,” Sharif added.

Coming to the Kashmir issue and relations with India, the prime minister said Pakistan’s foreign policy was “one of friendliness and goodwill towards all.”

“We want good relations with all neighbors, including India,” said the prime minister.

However, he stressed that for “complete normalization” of relations, including the revival of trade ties, India must “reverse its actions” of Aug. 5, 2019, when New Delhi revoked the limited autonomy of Indian Illegally Occupied Jammu and Kashmir.

He also said India must end its “state terrorism” in IIOJK and not seek “demographic changes in the occupied territory to perpetuate its illegal occupation.”

Referring to his inaugural address as prime minister, Sharif said he “reiterated our desire for maintaining ‘good ties’ with India.

“We, however, strongly believe that durable peace cannot be achieved without a just resolution of the Jammu and Kashmir dispute in accordance with the United Nations Security Council resolutions and wishes of the Kashmiri people.”

“The onus remains on India to create a conducive environment for meaningful engagement.”