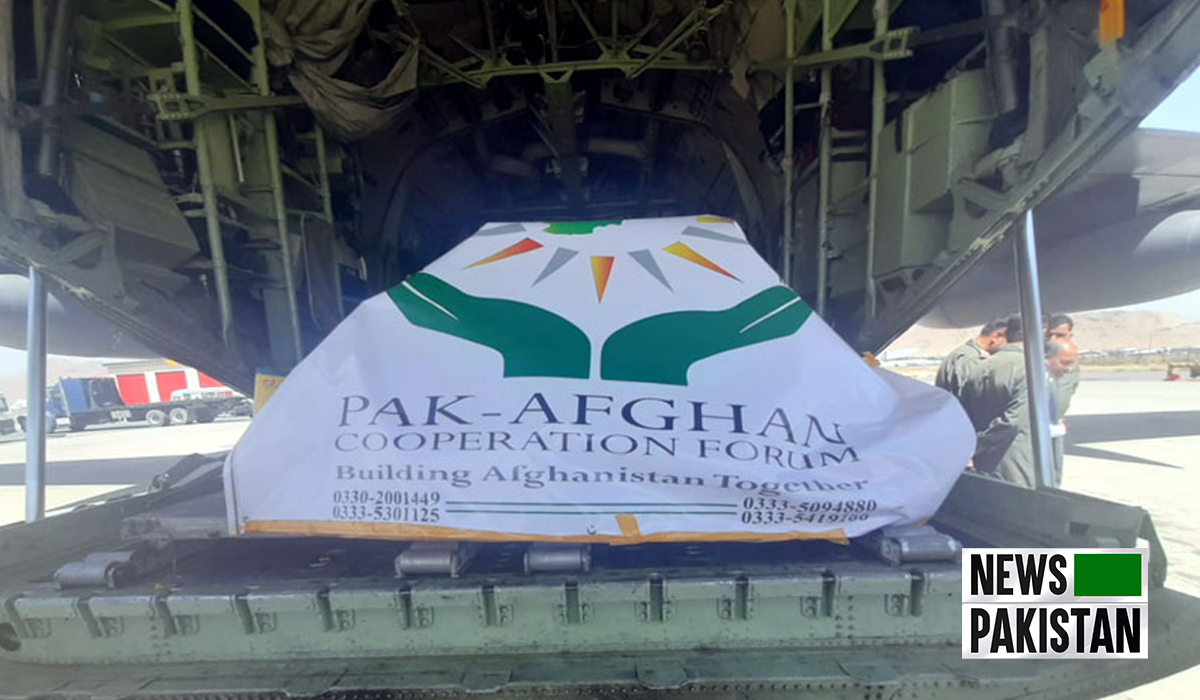 KABUL: A C-130 aircraft of Pakistan Air Force landed at Afghanistan’s capital Kabul on Thursday (9th of September, 2021) carrying relief goods for the people of the country.

Pakistan’s ambassador to Afghanistan Mansoor Ahmad Khan received the humanitarian supplies at the Hamid Karzai International Airport and handed over to the Afghan officials. Talking to media, the ambassador said the relief goods included around 10 ton of flour, 1.5 ton of ghee and a huge quantity of emergency medicine.
“With first such flight, this is just a beginning of the humanitarian assistance for the people of Afghanistan, as more would be carried out in coming days,” he said.
Khan said two more C-130 flights carrying relief goods would be arranged for Kandahar and Khost on Friday and Saturday, respectively.
He said the activity would continue for weeks and months and Pakistan’s public and private sectors and the charity organizations would be sending humanitarian supplies to Afghanistan in a systematic way.
Beside air routes, he said, the goods would be transported through Pakistan’s land routes including Torkham and Chaman as well.
The Foreign Office in a statement said, “The Government of Pakistan will continue to do its best to help Afghan brethren during the prevalent challenging environment.”.
Pakistan has consistently been urging the international community to help avert the economic collapse and humanitarian crisis in Afghanistan after the fall of the Ashraf Ghani government.
The landlocked country has been cut off from the rest of the world for almost a month after the collapse of the previous government.

A senior United Nations official has warned that UN food stocks in Afghanistan could run out this month, underscoring a critical need for US $ 200 million to provide food to the most vulnerable.
Speaking to New York-based correspondents from Kabul via video-link, Deputy Special Representative and Humanitarian Coordinator in Afghanistan Ramiz Alakbarov said every effort was being made to bring in more supplies and that Pakistan was helping to meet the grave situation.
Pakistan, he said, was extending “good cooperation”, and Islamabad has become a hub for UN’s humanitarian operations in Afghanistan.
The UN transported 600 metric of foodstuff via land route from Islamabad to Afghanistan, the official said.
“We are grateful to Pakistan…,”Alakbarov said, adding that Pakistan International Airlines (PIA) had also started to deliver medicines
for the needy in Afghanistan, and it’s first flight landed in Mazar-i-Sharif on Monday.
At this stage, the UN official said at at least one-third of the conflict-torn country’s population currently is “not sure that they will have a meal every day or not. This is what is going on.”
“By the end of September, the stocks which the World Food Programme has in the country will be out. We will be out of stock. We will not be able to provide those essential food items because we’ll be out of stock,” Alakbarov told reporters.
Alakbarov stressed that more than half of all under-fives were suffering from extreme malnutrition, and more than one-third of citizens were not getting enough to eat.
“It is extremely important that we prevent Afghanistan from descending into a further humanitarian catastrophe by taking the necessary steps to provide essential items which this country needs right now. And that is to support food, health and protection services, and non-food items, to those who are in extreme need,” Alakbarov added.
UN teams have also been providing communities with access to water and sanitation, as well as protection services, including to some 800 children at Kabul airport.
However, Alakbarov said the World Food Programme (WFP) could run out of stocks by the end of September.
“For us to keep the current demand, we need at least $ 200 million only for the food sector, to be able to provide food to the most vulnerable,” he added. “And those most vulnerable are children.”
The UN was set to issue a flash appeal for Afghanistan in the coming days.
While two “major” UN Member States have signalled their financial support, this still will not be enough, he said, stating “we need a really broad participation of the international community in these resource mobilization efforts.”
Even before the current upheaval, some 18 million people, or half the population, depended on emergency aid to meet their basic needs. A US $ 1.3 billion funding request from earlier in the year had so far netted less than US $ 400 million.
Meanwhile, humanitarian partners were able to access most of the country, and were working in 394 out of the 403 districts.
Alakbarov said although the Taliban have provided “every assurances”, humanitarian access varies from province to province due to several issues, including the degree to which women were being allowed to keep working.
In some places, Taliban provincial authorities have allowed women humanitarians to return to their jobs in health and education, or to take part in needs assessments. In others “we have not received that possibility”, he said.
“We continue to advocate very strongly with the Taliban, first of all for respect to the principles of gender equality and participation so that women can return to work and provide the required assistance. And that we be provided with any necessary facilitation to do this work.”
Alakbarov underscored that staff safety was a top priority, particularly for women personnel, most of whom are Afghan nationals.
“The issue of gender equality and women is a big test also, for the Taliban, and for the way the international community will be reacting and interacting,” he said. “And obviously, it is in the centre of attention of the United Nations”, he said.