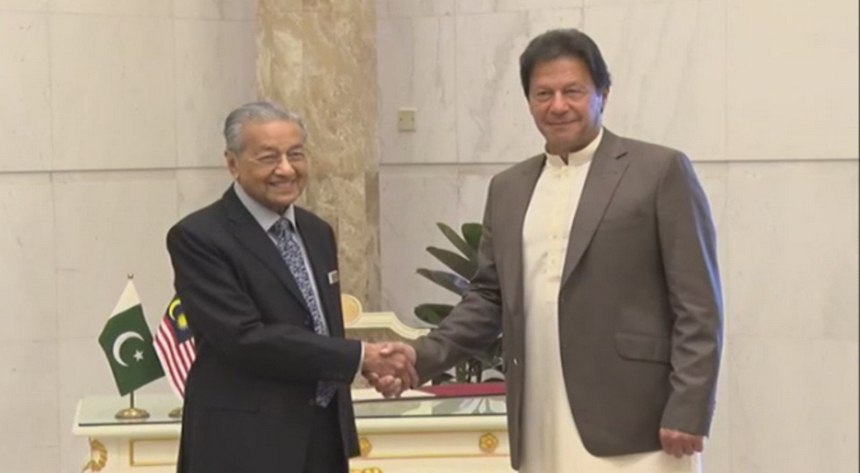 Pakistan and Malaysia had agreed to build a strong economic partnership and work together on issues affecting the Muslim Ummah. The two sides agreed for regular discussions to strengthen the trade and investment relations by removing barriers in key areas and develop linkages between the private sectors. Pakistan said it would buy more palm oil from Malaysia.

During the talks the two sides expressed commitment to build stronger ties in the areas of defense, law enforcement, tourism and education. It has been agreed to have more exchanges to set the future direction of bilateral relationship.  Pakistan and Malaysia reaffirmed commitment to ensure stronger collaboration amongst various ministries and agencies in order to augment the friendship and understanding.

Prime Minister Imran Khan thanked Mahathir Mohamad for standing by Pakistan on Kashmir issue. He stated that unfortunately a very radical and extremist government had taken over India which had incarcerated the populace of Kashmir. Imran Khan noted that Malaysia had to suffer economically as India had cut import of palm oil from it. PM Imran Khan said he would like to attend the next Kuala Lumpur Summit. He said this would not affect Pakistan’s relationship with other Muslim countries. He said the forum will help promote unity amongst the Muslim Ummah.

Malaysian PM said Pakistan and Malaysia have multifaceted relations and this visit of Prime Minister Imran Khan reflected the commitment to further promote these relations. Mahathir Mohamad said that the duo had also discussed the current situation in Muslim Ummah including the Palestine. The two sides also signed an extradition treaty.

FM told the two countries had also signed three agreements including treaty for extradition of criminals and fugitives between the two countries and social protection agreement to provide social reliefs to the Pakistani labor class in Malaysia.

Pakistani Foreign Minister stated that remittances from Malaysia increased by thirty-five percent during 2018-19 and about $ 1.55 billion were being transferred to Pakistan.

S. Arabia says Pakistan was not pressurized to refrain from participating in KL Summit

ISLAMABAD: Saudi diplomatic mission here, terming the insinuation as baseless, stated today that it did not pressurize Pakistan to refrain from participating in Kuala Lumpur Summit.

Diplomatic post of Saudi Arabia held that the two countries enjoyed a consensus of views on most regional and international issues, especially regarding to Islamic nation: “Saudi Arabia has always stood with Pakistan in difficult times and we strive always to stand with Pakistan to be a successful and stable country.”

“Unfortunately, we see that Saudi Arabia pressures Pakistan. Now, there are promises that the country has given to Pakistan regarding the central bank. However, more than that, there are four million Pakistanis working in Saudi Arabia. They [threaten by saying that they] would send [Pakistanis] back and re-employ Bangladeshis instead,” Turkish President Recep Tayyip Erdogan held.

It is pertinent to mention here that Saudi Arabia had stated that KL Summit was undermining the Organization of Islamic Cooperation (OIC). Furthermore, on a call with Malaysian Prime Minister Dr Mahathir Mohammad, Saudi King Salman reaffirmed that such issues should be discussed through the OIC.

It has further been insinuated that Saudi Arabia’s reluctance to attend stemmed from fear of being diplomatically isolated by Iran, Qatar and Turkey, all of whom were attending KL Summit.

Erdogan, while speaking to Media stated that it was not the first time that Saudi Arabia and the United Arab Emirates had put pressure on a country for doing or not doing certain things. According to Erdogan Saudi Arabia had also threatened to withdraw money it had deposited  the State Bank of Pakistan.

Pakistani Foreign Office Spokesperson stated that Islamabad did not participate in the KL Summit as time and efforts were needed to address the concerns of major Muslim countries regarding possible division in the Ummah. Pakistan will continue to work for the unity and solidarity of the Ummah, which is indispensable for effectively addressing the challenges faced by the Muslim world.

It may be recalled that Pakistan was one of the first countries with which Malaysian PM Dr Mahathir had shared his plans for holding the Summit when he met PM Imran along with Erdogan on the sidelines of the UNGA September session in the Big Apple. Moreover, Imran Khan had later formally conveyed his acceptance of the invitation for attending the Summit.

Sultan Qaboos of Oman passed away on Friday