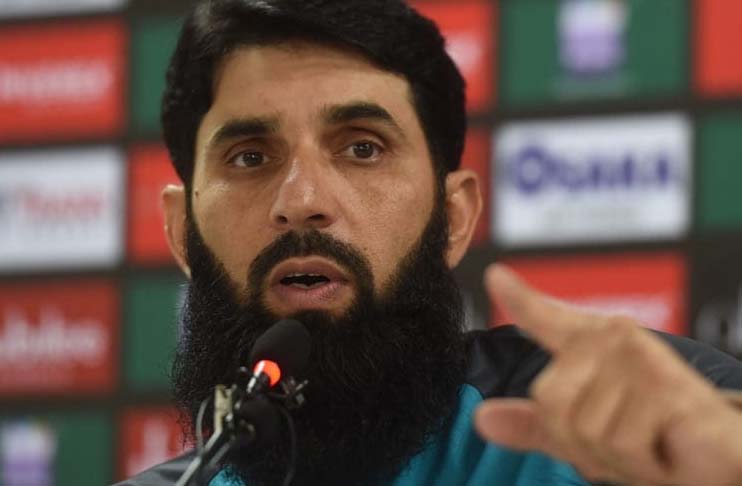 LAHORE: Pakistan squad for the three One-Day Internationals and three Twenty20 Internationals will be announced here on October 19, a day after the conclusion of the First XI National T20 Cup, Pakistan head coach and chief selector Misbah-ul-Haq said on Tuesday.

Zimbabwe will arrive later this month for the three ICC Men’s Cricket World Cup Super League matches on 30 October, 1 and 3 November in Multan, which will be followed by three T20Is on 7, 8 and 10 November.

“We will name around 23 players for the 50-over matches on 19 October for the pre-series camp that will be held in Multan from 21 October. As we have not played any 50-over games since the home series against Sri Lanka 12 months ago, the 23 players will take part on two intra-squad 50-over matches on 24 and 26 October,” Misbah told reporters during the Second XI National T20 Cup matches at the Gaddafi Stadium.

“After the ODIs, players who are not required for the T20Is, will be released and advised to participate in the Quaid-e-Azam Trophy first-class tournament, which begins on 25 October.

“Apart from the two intro-squad matches, we are announcing a bigger pool of players due to Covid-19 restrictions and bio-secure bubble,” Misbah said.

The chief selector and head coach said he will watch the second round matches of the First XI National T20 Cup in Rawalpindi, which begins on 9 October, and will also use the opportunity to continue discussions with his fellow selectors who are also team coaches.

“I had a first round of discussion with the coaches in Multan and we will resume those discussions in Rawalpindi.

“We will take a sensible and commonsense approach for the Zimbabwe series. While we want to give opportunities to the younger players, we also need to ensure we win matches as there is no alternate or replacement to success. I am all for the rotation policy as long as it doesn’t affect the team combination and result.

“This is international cricket and each opponent at this level needs to be treated with respect.

“The National T20 Cup has produced outstanding cricket. The younger players have smartly and intelligently utilized this platform to express themselves, which is excellent. A number of performances will give the selectors some headaches when they will sit to finalize the squad, but it will be a good headache to have.

“We are fortunate to have a competitive domestic season during the Covid-19 pandemic, which will be complimented by a packed international calendar. After Zimbabwe, the senior and Shaheens squads will tour New Zealand where the youngster will get more games to hone their skills and learn the rigours and demands of international cricket.”

At the back of the Zimbabwe series, the PCB will stage the remaining four matches of the HBL Pakistan Super League on 14, 15 and 17 November, while the Pakistan cricket team will depart for New Zealand on 23 November for the series, which begins in Auckland with the first T20I on 18 December.

The remaining two T20Is will be played in Hamilton and Napier on 20 and 22 December, while the two Tests will be held in Mount Maunganui and Christchurch from 26-30 December and 3-7 January.

It is being anticipated that on their way to Zimbabwe, Pakistan may take a stopover in South Africa to play three ODIs and three T20Is, which were scheduled in October 2020 but were postponed by Cricket South Africa due to high number of Covid-19 cases in their country.

Messi puts Argentina back on course for last 16