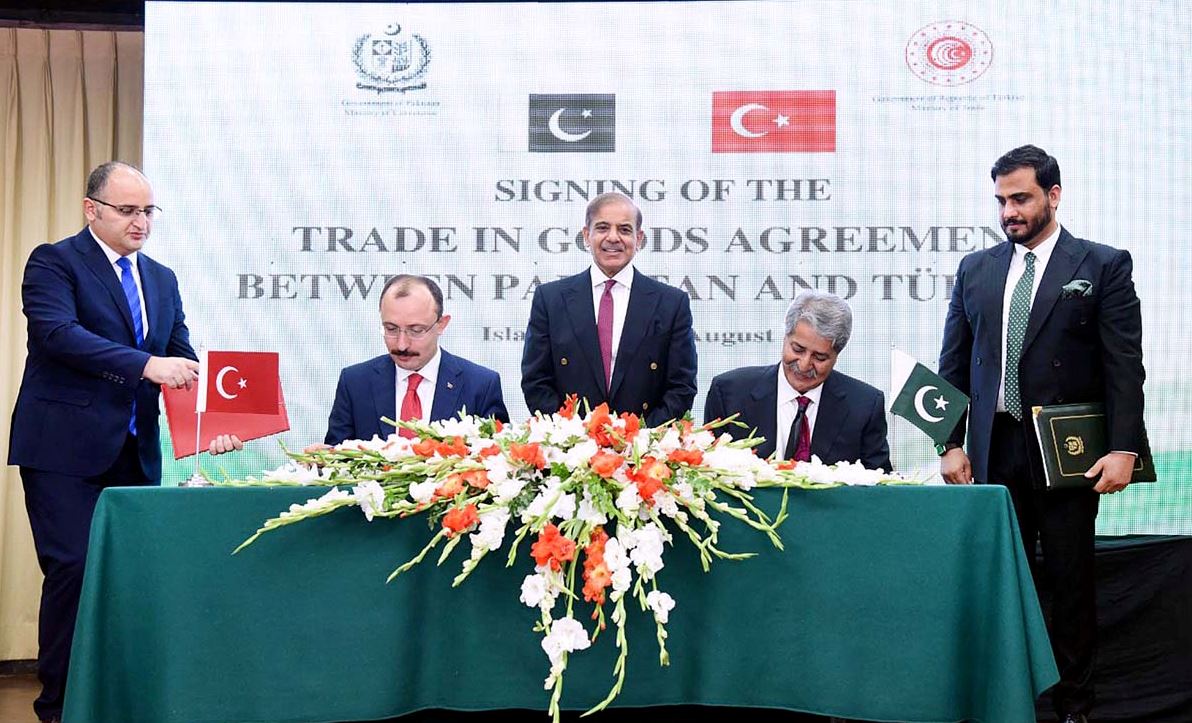 ISLAMABAD: Pakistan and Turkiye on Friday (12th of August, 2022) inked the Preferential Trade Agreement aimed at boosting trade in goods between the two countries.

Prime Minister Shehbaz Sharif witnessed the inking of the PTA at a ceremony held here at the PM Office, as the visiting Turkish Trade Minister Dr Mehmet Mus and Minister for Commerce Syed Naveed Qamar signed the accord.

Prime Minister Sharif in his remarks termed the agreement “a great moment and a milestone” in the brotherly and historic relations between Pakistan and Turkiye.

He recalled that following his official visit to Turkiye in May, the untiring efforts of the ministries of both sides resulted in the signing of the agreement.

He said immense business opportunities existed between the two countries and expressed confidence that the accord would further explore the trade avenues in diverse sectors.
The prime minister said Pakistan would continue to work with Turkiye on strengthening bilateral ties.
Trade Minister Dr Mehmet Mus said the occasion marked a significant milestone which would contribute in a long way to further strengthening and expansion of trade ties.

He said meeting expectations of all stakeholders was not easy, however added that dedication and step-by-step measures led to conclusion of the accord.

He thanked PM Shehbaz Sharif for his leadership to seal the agreement for the betterment of the two countries and enhancing linkages between their business communities.

Syed Naveed Qamar hoped the PTA between Pakistan and Turkey would open up new opportunities to boost bilateral trade across various sectors.

He stressed the need for increasing business-to-business interaction for strengthening trade and investment relations between the brotherly countries.

The key highlights of the trade concessions offered by both sides under the Agreement are as follows: (i) Turkiye had offered concessions to Pakistan on 261 Tariff Lines, which include key items of Pakistan’s export interest to Turkiye from both agriculture and the industrial sectors.

Pakistan and Turkey enjoy historical relations, which are growing in different domains including political, defence, culture and education.

However, realizing that economic engagement, especially, trade required concentrated steps to improve bilateral relations, the Framework Agreement between Pakistan and Turkiye was signed in 2016, by the Turkish Minister of Economy, Mustafa Elitas and Pakistan’s Minister of Commerce, Engineer Khurram Dastagir.

The Framework Agreement laid the ground for gradual liberalization in goods, services, and investment by establishing a Free Trade Area.

Under the ambit of the Framework Agreement, a Joint Scoping Study was conducted to identify the areas in which both sides can make progress in reducing tariff barriers to trade.

During the visit to Turkiye, the Minister for Commerce Syed Naveed Qamar and Minister of Trade Turkiye Mehmet Mus a joint Ministerial Statement to conclude the Trade in Goods Agreement based on mutual benefit between the two countries.

The Trade in Goods Agreement will help to achieve the strategic goal of bilateral trade of $5 billion in the medium term.

After 19 rounds of bilateral negotiations, the agreement has been finalized for signing on 12th August 2022.

Both sides agree that once the initial agreement creates goodwill and economic gains, both sides can move towards a more comprehensive arrangement.

The threat of food insecurity

All institutions on same page for prosperity of the country: PM Abbasi