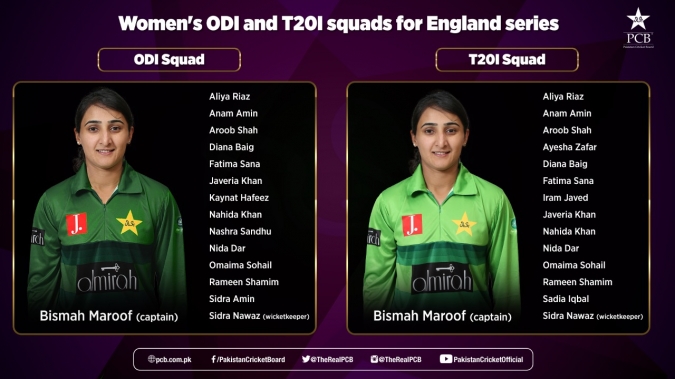 LAHORE: Pakistan Cricket Board (PCB)’s women selection committee has announced 15-member national squad for three ICC Women’s Championship ODIs against England to be held next from next month in Kuala Lumpur, Malaysia.

The ODI will be followed by three T20Is starting from 9-20 December.

The squad was announced by the cricket board in an official press release today. According to the notification issued, Urooj Mumtaz chaired the women’s selection committee and announced that four changes have been made in the ODI squad.

Iram Javed, Kainat Imtiaz, Sadia Iqbal and Sana Mir, the former captain who, last month, announced that  she was taking a break from international cricket for a while.

While announcing the squad, Urooj Mumtaz said: “The two squads have been put together after considering recent performances in international and domestic events.

“A series against a quality side like England always brings challenges and we have put together these combinations keeping that in mind.”

“Pakistan have done well in the ICC Women’s Championship. And, after a good start that they have had to the ongoing season by beating Bangladesh in the T20I series and levelling the one-day series, we are confident that the series against England is going to be exciting,” she added.