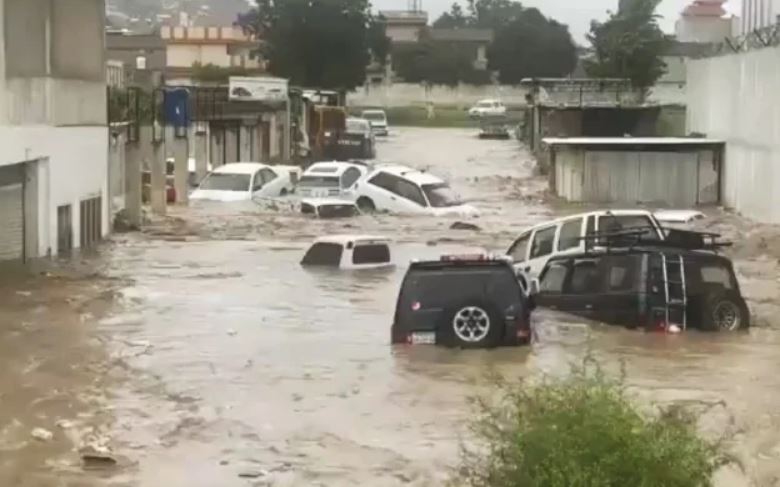 PESHAWAR: Provincial Disaster Management Authority (PDMA) on Friday (25th of August, 2022) issued warning apropos high level flood in Khwazakhela, nullahs and in river Swat with 227899 cusecs of water that led to a dangerous situation living near the nullahs and river sites.

The warning in this connection was also issued by Flood Forecasting Division of flood level recorded at 227899 cusecs and PDMA issued a written directives to district administration of Swat, Dir Lower, Malakand, Mohmand, Charsadda, Mardan, Nowshera and provincial capital Peshawar.

The PDMA also issued instructions to the all respective district administrations to be alert and take up precautionary measures in order to avoid any untoward incident besides taking preventive measures by identifying the population of sensitive areas.

When contacted, Deputy Swat Junaid Khan told APP that line of sight cleared for ease of traffic in Matta and most of the hotels constructed nearby river Swat were badly damaged and some of them were even grounded.

He said that the district administration has deployed teams across Swat District to ensure rescue and relief operations for the safety of the people.

He said that according to irrigation department officials, more than 0.24 million cusecs of water crossed in river Swat and warning had been issued to those living nearby the river site to shift immediately to safer places.

He said that such a huge flood in the river Swat, badly damaged bazaars, markets and those hotels constructed at the site of the river.

He said the Rescue teams of the district administration besides ensuring relief activities also help in shifting the people to safer points established for the purpose.

He said it has also ensured provision of food items and other essential commodities in the areas hit by the flood.

He said teams have also been formed to assess the damages caused due to heavy flooding besides work on restoration of communication and road links in the affected areas.

The district administration should ensure timely measures to protect any loss of life and property, infrastructure, crops and livestock and directed the concerned administration to continuously monitor the water level in the rivers and their associated streams, he said.

Besides the district administration, the PDMA has also instructed Rescue 1122, Civil Defense and all related organizations to remain alert and ensure the availability of equipment. Guidelines for monitoring and precautionary measures for settlements near streams linked to rivers.

The population in sensitive areas should be moved to safe places before an emergency situation arises, the PDMA said. When the official of the PDMA contacted, he underlined the need for timely aid and medical supplies should be provided to the affected people due to the flood.

The availability of food and medicines should also be ensured in the shelters upon evacuation of the nearby population and asked the locals, farmers, herdsmen to be warned in advance to move livestock to safe places.

Instructions have been issued to limit the movement of vehicles on highways adjacent to canals connected to rivers and in any case coordinate with the concerned departments for road cleaning.

The people have been asked not to listen to unnecessary rumors, in case of emergency contact the helpline of Rescue 1122 besides the emergency operation center of PDMA is fully functional and the people should report any untoward incident on the helpline 1700.

A person was rescued from a flooded rally at Matta Kore and provided immediate medical assistance by Rescue personnel removing the water from more than 60 houses, while more than 600 people trapped in flood rallies were also shifted to safe places, DG Rescue 1122 said.

The officials team have also been dispatched to Budh area and Bachari village of Dera Ismail Khan, DG Rescue 1122 informed.

More than 485 people have been shifted from different areas of Tank and in view of the possible flood relay in the rivers of Charsadda and Nowshera, the nearby residents have started to be shifted to safe places.

About the weather condition in Khyber Pakhtunkhwa, monsoon rains continue in most areas of Khyber Pakhtunkhwa and more rains are predicted in the next 24 hours, the official of the Meteorological Department said.

There is a risk of flood situation in southern districts and upper areas, the official of the Met Office said, adding, “The highest rainfall in the last 24 hours is 90 mm on record, 80 mm of rain was received in Timargarh, 71 mm in Kalam, 55 mm in Mirkhani, 54 mm in Malam Jabba and 51 mm in Dera Ismail Khan, Drosh recorded 42 mm, Chitral 32 mm, Balakot 28 mm and Peshawar 7 mm, the official said.