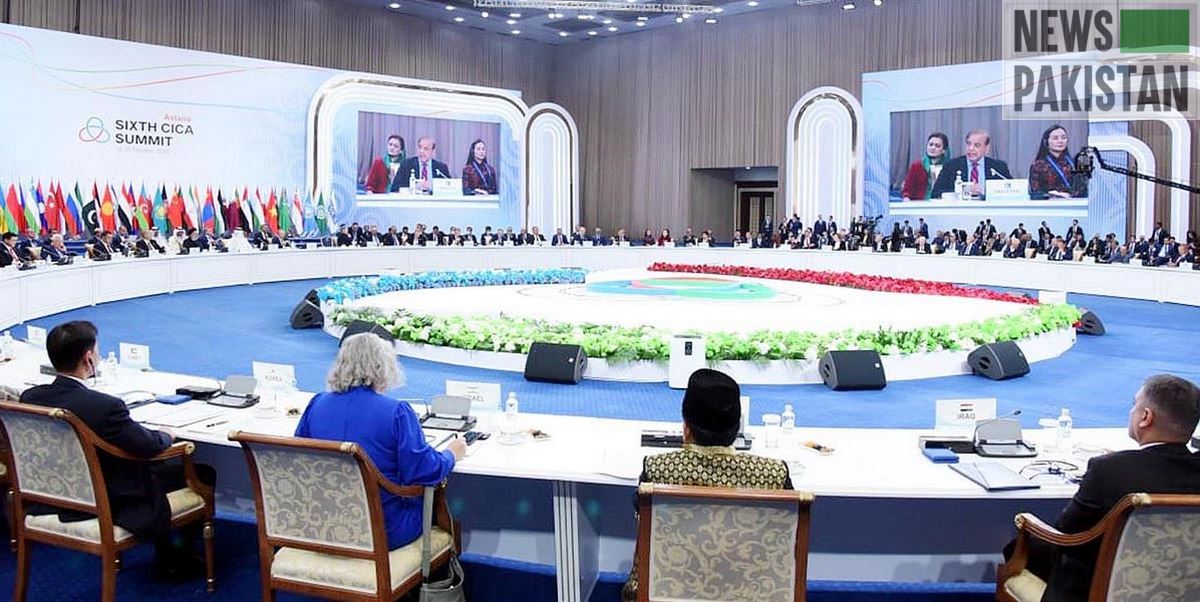 ASTANA: Prime Minister Shehbaz Sharif on Thursday strongly favored peaceful dialogue in resolving conflicts with other countries, including the neighboring India, in a bid to achieve the goals of prosperity of the nations and the region.

Addressing at the 6th summit of the Conference on Interaction and Confidence Building Measures in Asia (CICA) in Kazakhstan’s capital Astana, he said Pakistan desired peaceful relations with all its neighbours including India.
“We are willing to engage with India for the sake of prosperity and development as both sides of the border can not afford to deal with massive challenges of poverty and unemployment amid meager resources,” he said.
The prime minister’s speech focused on peace among nations to hit the goal of prosperity as he addressed the leaders of the multinational forum, gathered to discuss cooperation towards promoting peace, security and stability in Asia.
PM Shehbaz stressed that the people deserved the resources to be diverted to their education and health.“I want to leave behind a legacy of peace and progress for the prosperity of the coming generations of our region,” he said.
“Pakistan’s first priority at the moment is to revive rapid and equitable economy”.
He, however, said, the “onus remains on India to take a necessary steps to engage towards the result-oriented solutions.”.
The prime minister highlighted India’s unabated atrocities in Jammu and Kashmir for last seven decades, where he said, that the Kashmiris faced continued denial of their right to self-determination.
He urged other countries to take notice of India’s ‘bullet over ballot’ policy as it blatantly quashed the United Nations Security Council’s resolution on holding a plebiscite in Kashmir.
“India has become a threat to its minorities, neighbours and the entire region,” he said.
Sharif said Pakistan was “absolutely ready and willing for a discussion with Indian counterparts to promote trade and investment provided they showed the sincerity of purpose”.
On Afghanistan, he said the four decades of conflict not only took a heavy toll on the country but also upon its neighbouring Pakistan.
Pakistan, he said, suffered immense damage to its peace and security with serious consequences borne in shape of 80,000 casualties and billions of dollars financial losses.
The prime minister expressed satisfaction that after immense sacrifices, Pakistan had now become able to control extremism and terrorism on its soil besides managing to host four million Afghan refugees.
“Prosperous and stable Afghanistan is not only in the interest of Pakistan, but also for the international community,” he said.
Shehbaz Sharif called for pooling resources among the regional countries to address the common challenges in the interest of peace and progress.“If we team our resources, Asia can stand with pride and achievement,” he said.
“Through constructive dialogue, we can build mutual trust”.He mentioned Pakistan’s location offering a natural bridge among various economies of the region. In this regard, he highlighted the multi-billion dollar project of China Pakistan Economic Corridor (CPEC), which had transformed the economic and connectivity landscape of the region.
He also invited the CICA member states to consider benefiting from the trade, investment and business opportunities offered by Pakistan.
On recent floods in Pakistan, the prime minister pointed out that the country was bearing the brunt of climate change despite its less than one percent carbon omissions.
He thanked the countries that stepped forward in extending assistance to Pakistan to carry out the relief and rehabilitation activities in the flood-affected areas.
He also termed as encouraging the upscale $816 million flash appeal by the United Nations launched to meet the daunting challenge of heavy losses incurred by flash floods.
The prime minister expressed confidence that Pakistan was “determined and committed” to emerge stronger after the flood disaster.“Pakistan, with the support of its people and the friendly countries, will come out of this problem,” he said.
The prime minister in his speech deliberated upon the Palestine dispute, stressing a peaceful way of its resolution for ensuring peace in the Middle East and the region.He also elaborated the significance of CICA as a unique forum for promoting interaction, understanding, and collaboration among the countries across Asia.
Earlier, PM Sharif on his arrival at the Palace of Independence – the venue of CICA summit, was warmly welcomed by Kazakhstan’s President Kassym-Jomart Tokayev.The prime minister along with other heads of State and government also had a group photograph before the summit was opened.

26 Syrians, 9 Russians killed in IS attack