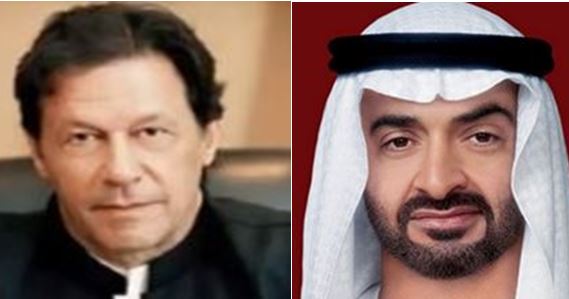 The prime minister expressed solidarity with the leadership, government and people of the United Arab Emirates, PM Office Media Wing said in a press release on Wednesday.

He underlined that such attacks could not be justified and stressed on immediate cessation of these attacks, which continued to pose grave threat to regional peace and security.

The prime minister offered deepest condolences to the families of all the victims and prayed for speedy recovery of the injured.

The Crown Prince thanked the prime minister for the strong expression of support, and also offered condolence on the sad demise of a Pakistani national who died in the tragic incident.

Earlier, the United Arab Emirates had condemned a “heinous” attack it blamed on Yemen’s Houthi rebels after three people were killed in a fuel tank blast triggered by a suspected drone strike Monday.

“UAE authorities… are dealing… with the heinous Houthi attack on some civilian installations in Abu Dhabi,” tweeted presidential advisor Anwar Gargash, referring to the Yemeni rebels.

Foreign Office Spokesperson Asim Iftikhar has confirmed the demise of a Pakistani national in the fire (reportedly caused by attack by Yemen’s Houthi rebels).

In a statement, he said that the Abu Dhabi Police had informed the Diplomatic Mission of Pakistan in Abu Dhabi about the demise of a Pakistani in the incident.

He said Pakistan’s Embassy was in close contact with the UAE authorities for ascertaining more details in this regard.

It may be recalled that very long ago Yemen’s Iran-aligned Houthi rebels have targeted an airport in Saudi Arabia by means of four drones.

Russia warns the US is ‘playing with fire’ over sanctions